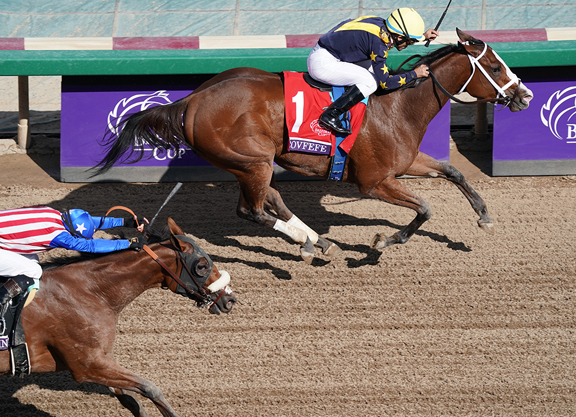 She had some anxious moments, but favored Covfefe (Into Mischief) ultimately proved superior to her elders and held off a fellow Grade I-winning 3-year-old in the GI Breeders' Cup Filly & Mare Sprint to get the World Championships action underway Saturday at Santa Anita.

Debuting as a heavy chalk last September at Churchill, the $250,000 Keeneland September buy ran to her hype with a

9 1/4-length romp, but was soundly beaten when fourth at odds-on in the GI Frizette S. Laid up for the winter, the bay returned with a workmanlike allowance score Apr. 6 in Lexington before announcing her arrival with a devastating, track record-shattering romp in the GIII Adena Springs Miss Preakness S. May 17 at Pimlico. Upset at 2-5 when third in the Roxelana S. June 22 at Churchill, she bounced back with her first top-level success after winning a scintillating stretch battle with GI Kentucky Oaks winner Serengeti Empress (Alternation) in the GI Longines Test S. Aug. 3 at Saratoga, and repeated with an eight-length tour de force in the Dogwood S. last out Sept. 21 at Churchill, defeating next-out GII Lexus Raven Run winner Bell's the One (Majesticperfection).

Opening up a little chilly on the board at 3-1 before eventually having her price cut in half by post, Covfefe was not away all that sharply from her rail draw, but recovered quickly and avoided any early traffic to find a comfortable pocketed spot in the second flight as longshots Danuska's My Girl (Shackleford) and Heavenhasmynikki (Majestic Warrior) went on with it through a :22.13 quarter. Angling off the inside heading into the turn, she advanced in the three path with Spiced Perfection (Smiling Tiger) ranging up to her outside to make it four in a line seven-sixteenths out.

Taking command soon after passing a :44.78 half, Covfefe opened up in early stretch and was asked to close the deal by rider Joel Rosario. Bellafina (Quality Road), however, had enjoyed a perfect ground-saving trip from behind the speed under Flavien Prat, and emerged past midstretch as the only realistic threat to the favorite. Those two had it to themselves in the final furlong and Bellafina gradually ate into her deficit, but Covfefe held firm to prevail by a hard-fought three-quarters of a length.

“She's a champion, hopefully,” said trainer Brad Cox, who picked up his second win of the weekend after capturing the GI Breeders' Cup Juvenile Fillies with British Idiom (Flashback) Friday. “I feel like championship honors were on the line for champion filly and mare sprinter. I hope she locked that up. Two Grade Is, two very prestigious races. She overcame a lot today, too. I know this race hasn't been around a long, long time but I think eight Test winners maybe have tried this and not been able to break through. One, two and three were all holes horses hadn't performed well from, 3-year-olds hadn't performed well in the race. The list went on of all these things which hadn't been done. But I didn't waver. I thought there was no shot of her not running her race. I knew she was going to run her race. You just stay optimistic and know your horse is doing well and the rest will take care of itself.”

“Coming out of the one hole, there were a couple horses that showed more speed out of there,” added Rosario. “I was able to work my way out and get her in the clear. After that, she did all the work.”

Of her fan favorite filly, owner Jaime Roth said, “I think as most people know, I got into sport because as a fan of Rachel Alexandra. So to have a horse that's now a Breeders' Cup champion that so many people love, it just means the world to share a really special horse with fans. And for them to get to see the performance, especially in California–a lot of people don't get to see her often because she's on the East Coast, it's pretty cool … This moment right now is the best moment I've ever had as a horse owner. This is what it's all about.”

Covfefe, one of 58 stakes winners, 25 graded stakes winners and five Grade I winners for her superstar sire, is the second black-type winner out of six foals to race for 21-year-old Unbridled dam Antics, following Japanese MGSW/MG1SP Albiano. Antics comes from a deep female family, being a half-sister to GISW and stalwart sire Arch (Kris S.) and GISW Acoma (Empire Maker). Covfefe's third dam is 1983's champion 2-year-old filly Althea, who beat the boys in the GI Arkansas Derby the following spring while equaling Oaklawn's nine-furlong track record. She also produced Japanese champion Yamanin Paradise (Danzig). Antics is responsible for a yearling Nyquist filly named Caper and produced a colt by Violence this season before being bred to Karakontie (Jpn).