Into Mischief Firster Overcomes Trouble To Become a ‘Rising Star’ 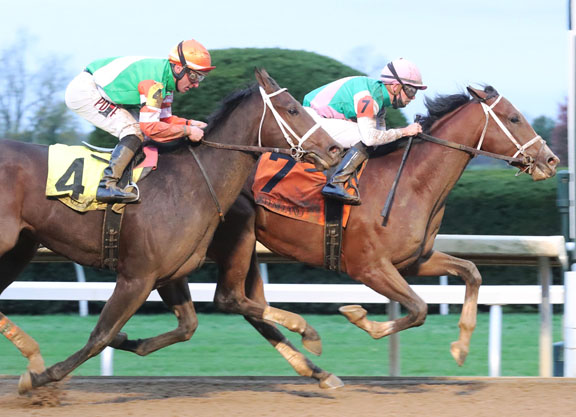 Juddmonte Farms homebred Mandaloun (Into Mischief) took the lion’s share of the pari-mutuel activity at 11-10 and the bay managed to overcome an eventful trip to graduate at first asking in the Saturday finale from Keeneland, good for the ‘TDN Rising Star’ designation.

Away in good order from the middle of the gate, Mandaloun raced in and among rivals down the backstretch, never looking entirely comfortable in transit and lost several spots into the turn. Under a ride fully 3 1/2 furlongs from home, the colt was taken hold of while short of room and with only two rivals beaten at the quarter pole. Hard-ridden into the final furlong and a half, Mandaloun brushed on a couple of occasions with Americanrevolution (Constitution) at the eighth pole, but he was ultimately steered down to the inside by Florent Geroux and fought his way past a game Bob’s Edge (Competitive Edge) to score by a hard-fought half-length.

Brooch, a dual group winner while under the care of Dermot Weld in Ireland, produced a full-brother to Mandaloun in 2019 which sadly passed away this year and is represented by a weanling Into Mischief colt. She was most recently bred to War Front.