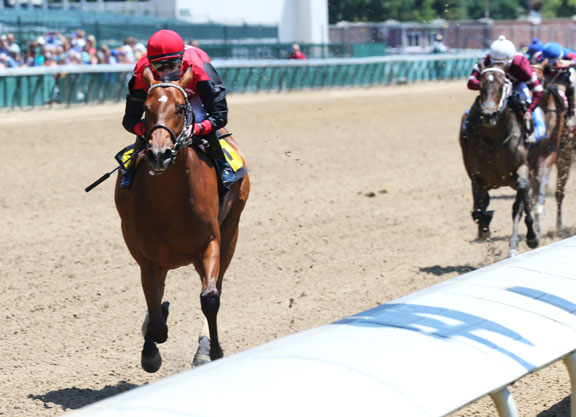 Frank's Rockette (f, 2, Into Mischief–Rocket Twentyone, by Indian Charlie) favored at 5-2 in the opener at Churchill despite hailing from a Bill Mott barn that's not known for winning with first time-starters, ran to the buzz to garner the 'TDN Rising Star' distinction. The homebred for Frank Fletcher was entering her debut off a June 15 bullet three-eighths breeze in :35 3/5 (1/21) out of the gate at the Louisville oval.

The bay was away alertly in the field of eight and sat perched wide just off the early leaders as they carved out an opening quarter in :22.46. Rider Julien Leparoux barely moved on Frank's Rockette as she ranged up on the turn and exploded in the lane, easily shaking off her competition to draw away by 8 3/4 lengths in hand. Wasabi Girl (Shanghai Bobby) and Symphony Hall (Wicked Strong) completed the exacta and trifecta, respectively.

The dam of the victress, Rocket Twentyone, was purchased by Fletcher for $300,000 at the 2011 OBS March Sale and proved to be a precocious juvenile in her own right, romping in her debut at Prairie Meadows before acing the GIII Arlington-Washington Lassie S. Rocket Twentyone has produced the stakes-placed filly Firewater Rocket (Macho Rocket) and most recently visited Into Mischief last season.