Into Mischief Filly No Joke in 'Rising Star' Worthy Unveiling 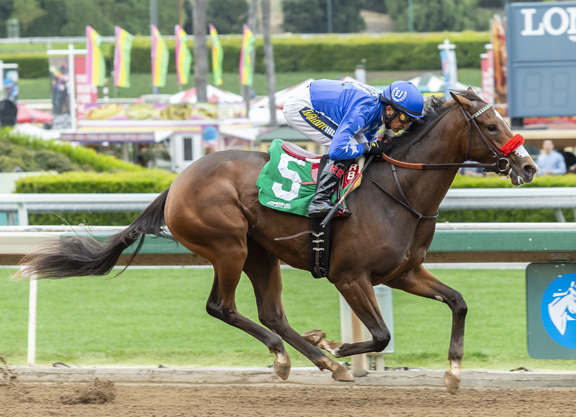 ERJ Racing LLC, Dave Kenney and Westside Racing Stable's Comical (Into Mischief) turned heads Sunday at Santa Anita with a sharp unveiling worthy of 'TDN Rising Star'-dom. With three consecutive gate works on display, most recently in :48 flat here May 20 (click for XBTV video), the narrow 8-5 second choice nearly beat the bell and came out running. Soon confronted by favored Gold Star Lady (Candy Ride {Arg})–a $300,000 OBSMAR grad–the bay knocked heads with that foe through an opening quarter in :22.71. Those two were in a race of their own heading for home, but it quickly became a one-horse affair as Comical hit another gear near the eighth pole and left her rival in the dust to score by about six lengths before galloping out much farther in front. The $100,000 KEESEP yearling stopped the clock in :52.32. Comical's dam is a full-sister to MGISW Colonel John (Tiznow) and to Grade I-placed flat runner and steeplechase extraordinaire. She has half-sisters by Candy Ride (Arg) born in 2018 and 2019 and was preceded by two more Candy Rides who brought $550,000 and $500,000, respectively, at auction. Comical's romp comes on the back of a particularly strong Fasig-Tipton Midlantic Two-Year-Olds in Training Sale for Into Mischief, who was responsible for a record-breaking $1.8-million filly and a colt who was the third topper at $710,000.