Into Mischief Filly Leads 1-2 for Cali in Raven Run 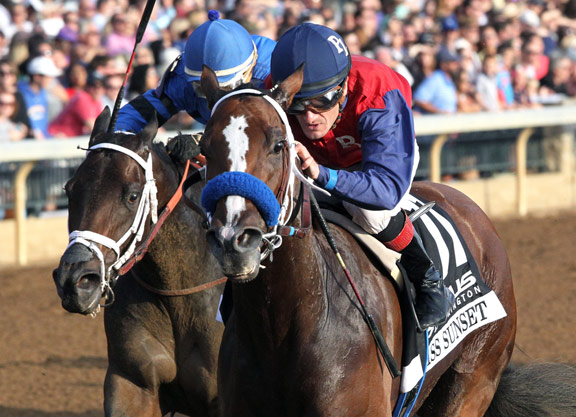 Alan Klein and Philip Lebherz's Miss Sunset (Into Mischief) bested Chalon (Dialed In) by a half-length for a California one-two finish while registering her first graded victory in the GII Lexus Raven Run S. at Keeneland Saturday. Away alertly from post 11, the 3-1 chalk let Chalon edge ahead and pressed from a close-up second, breathing down her competitor's neck through opening fractions of :22.64 and :45.61. Drawing even with that foe while running three wide rounding the far turn, the Cal-bred dueled Chalon down the length of the stretch, edging clear late to score. Torrent (Blame), a 59-1 shot, completed the trifecta.

“This filly is one of the most honest horses I've had in a long time,” winning trainer Jeff Bonde said. “She gives it her all every time. My owners own the mother, and they've got some foals out of her coming [by Smiling Tiger].They also own [MGSW sire] Smiling Tiger and thought it was in their interest to take a chance to get graded-placed.”

“We got a perfect post for [rating],” jockey Julien Leparoux said. “I let her break and left her alone. She was very easy to rate, and she finished up very strong. I talked to Mike Smith [who was aboard for her last two wins] and he told me I had a great chance. When Mike tells you that, [you know] she has a big chance”

Following a debut win with a victory in the state-bred Generous Portion S. during her brief juvenile campaign, Miss Sunset won the Sweet Life S. Feb. 12 in her first try on turf. Failing to find the winner's circle in her next two outings, the sophomore captured the grassy Campanile S. going a mile at Golden Gate against Cal-breds Apr. 30 and was second in the state-bred Melair S. going 1 1/16 miles on the Santa Anita main track May 29. A dominant winner of the Fleet Treat S. sprinting on the main track at Del Mar against fellow California-breds July 30, she entered this test off a win in the restricted CERF S., another dirt sprint at the seaside oval, Sept. 4.

Miss Sunset's dam Tuscan Sunset won three of seven starts and was claimed out of her final start, a win at Los Alamitos in April 2010 by Stanley Lee Howard for just $2,000. She produced her first foal in 2012 and was later sold for $36,000 with the winner in utero at the 2013 Keeneland November sale. Her 2015 foal by Smiling Tiger passed away, but she produced a filly by that stallion in 2016 and a colt by the same sire May 7 of this year. Miss Sunset hails from the family of MGSW multimillionaire Prayer for Relief (Jump Start). Her red hot sire Into Mischief is currently the leading sire of 3-year-olds in North America this year with 20 black-type horses and 11 black-type winners headlined by MGISW and GI Breeders' Cup Dirt Mile contender Practical Joke.