Into Mischief Filly All by Her Lonesome in Audobon Oaks 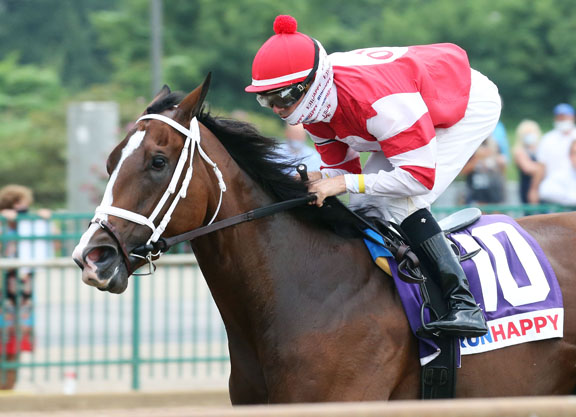 One day after ‘TDN Rising Star’ Gamine’s dominant romp in the GI Longines Test S., fellow Into Mischief sophomore filly Mundaye Call turned in a similarly head-turning performance. The pricey Fasig-Tipton Saratoga grad began her career with Don Chatlos, Jr., missing in her Saratoga debut almost exactly a year ago by a head at odds-on and finishing one slot ahead of Secondary Market (Into Mischief), who took a salty Saratoga allowance Sunday. Mundaye Call set the pace before fading to seventh in the GI Spinaway S. Sept. 1, but resurfaced at Del Mar Nov. 16 to break through by daylight over two next-out winners. She subsequently joined the Brad Cox barn, and returned to take a Keeneland allowance July 11 over Perfect Happiness (Majesticperfecton), who aired by 8 1/4 lengths in a local allowance a week ago.

One of many one could make a case for here, the bay took no prisoners from the outset as she bowled along on the front end through splits of :22.25 and :45.11. She never showed any signs of slowing, and poured it on in the stretch to cruise away under minimal encouragement while lowering the track record.

“Not surprised,” rider Florent Geroux said of the record-breaking effort. “The filly has been working extremely well in the morning. We’ve been very high on her. She won nicely first time for Brad at Keeneland with Joel Rosario while I was gone at Belmont Park to ride Monomoy Girl (Tapizar). You never expect a track record. But we expected a big race for her today.”

Cox added, “She’s a big strong filly. Right sire. That sire is amazing. We’ve had luck with Covfefe, Owendale, others. Gamine–we don’t have her, but wish we did. Long list of good Into Mischiefs, and she’s hopefully going to be on the list. She’s fast. She showed that today breaking the track record. She’s still lightly raced. We’re very pleased with what she was able to accomplishment today.”

Cox said he would discuss the prospects of running in next month’s GI Kentucky Oaks with owner Larry Best.

Mundaye Call is out of an unraced daughter of French MGSW and English G1SP Smolensk, who also produced GSW/GSIP Can the Man (Into Mischief). Her third dam is Oaks winner Blush With Pride, who in turn was the dam of Broodmare of the Year Better Than Honour (Deputy Minister). Reve d’Amour has an unraced 2-year-old filly by Malibu Moon, a yearling filly by Strong Mandate and a foal full-brother to Mundate Call. She was bred back to Gun Runner.