Home » Archive » Europe » International Cast In Place For The Orby

International Cast In Place For The Orby 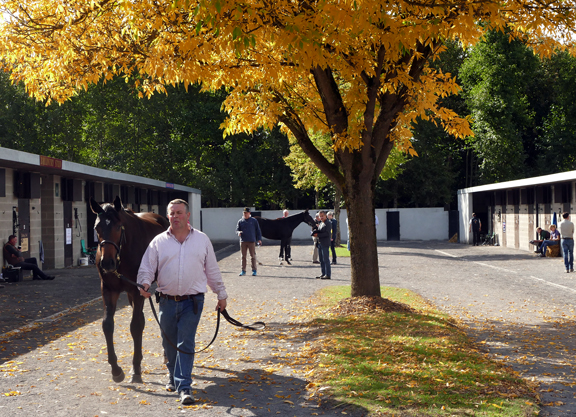 Conditions perfect for the start of the Orby Sale | Emma Berry

When the sun is filtering through leaves on the turn to shades of red and gold and some of the finest of Ireland's young thoroughbreds are strolling past, it's hard to feel that there's too much wrong in the world. Welcome to the bloodstock bubble that will envelope many breeders, vendors and buyers for the next month as the elite sales of Ireland and Britain steal the limelight back from North America.

Today it's the turn of Goffs, which stages its two-day Orby Sale from 10am, swiftly followed by the Sportman's Sale on Thursday, which returns to a single session after being held over two days last year.

This is an important week for Henry Beeby and his team and they are entitled to feel cautiously optimistic as the first yearling enters the ring this morning.

“It's the old story: the closer we get to the sale, the more I walk my box, but as long as it's only me and not the horses doing that we'll be fine,” joked Beeby at a sun-drenched Kill Paddocks on Monday.

Recent graduates have continued to advertise the sale's merit. The four-time Group 1-winning miler Ribchester (Ire) (Iffraaj {GB}), bought for €105,000 here in 2014, has been the standout poster boy of late but Capla Temptress (Ire) (Lope De Vega {Ire}), a €26,000 selection for trainer Marco Botti just a year ago, added to the roll of honour with her impressive victory in the GI Natalma S. earlier this month, while her contemporary Beckford (GB) (Bated Breath {GB}), a €55,000 purchase, won the G2 Railway S. and has twice been runner-up at Group 1 level. He heads to Saturday's G1 Juddmonte Middle Park S. at Newmarket.

Twelve months ago it was a colt by Dubawi (Ire) out of French Classic winner Beauty Parlour (JPN) (Deep Impact (JPN}) who led the Orby proceedings, becoming not just the star of the Wildenstein Stables Dispersal but of the whole sale when selling for €1.4 million to John Ferguson. Named Being There (Fr), the colt won a Newmarket maiden in July for Charlie Appleby.

Ferguson is back in harness at his first sale since his resignation from Godolphin in June and is at Goffs this week with son James and Sam Haggas, who will be working alongside him in his return as an independent bloodstock agent.

A full-brother to one of Ferguson's previous purchases, Godolphin's multiple Group 2 winner and young Darley stallion Bow Creek (Ire) (Shamardal), is one of the colts drawing plenty of attention at Goffs this week. Selling as lot 333 through his breeders Bobby and Honora Donworth of Roundhill Stud, the March-born colt is a son of the G3 Dahlia S. winner Beneventa (GB) (Most Welcome {GB}), whose winners also include the Group 3-placed Dare To Dance (Ire) (Danehill Dancer {Ire}).

“He's been very busy, in and out of his box constantly over the last few days, but he's taken it all really well. I'm delighted with him,” said Marlhill House manager Brian McConnon.

The fact that the sales grounds have been packed since Saturday has pleased Beeby, who said, “On Saturday I had one complaint from a vendor saying he was too busy too far away from the sale and I thought that was a pretty good complaint. We're delighted with the number of people who have come over. There's particularly strong representation from England and many overseas faces, which is great. What's really pleased me is the number of buyers who have worked through the two days and said that the catalogue has taken another step forward, both on paper and physically. So we're hopeful and we think there are some very nice horses here.”

He added, “We've been well supported by Irish breeders. I've said over the last few years that what we need to do is to encourage increasing numbers of Irish breeders to sell an increasing share of their best yearlings at Goffs and I think that's happening. We're very grateful that the buyers are coming and seeing that too. We have Markus Jooste and Derek Brugman from Mayfair Speculators here for the first time, Justin Zayat has come back and we have a number of Japanese and Australian buyers here, as well as the Hong Kong Jockey Club.”

Here Come The Girls
The all-female owners of dual Australian Group 1 winner Global Glamour (Aus) (Star Witness {Aus}) are on the hunt for the next representative for the It's All About The Girls syndicate and have charged BBA Ireland agent Patrick Cooper with the task of finding them a pair of horses to race in Ireland.

The truly international partnership consists of 40 women from seven countries, including Goffs' International Director Elaine 'Legs' Lawlor, who manages the syndicate. Fittingly, Global Glamour is under the care of Australia's leading female trainer Gai Waterhouse, and the Irish purchases will head to the stable of Jessica Harrington.

“We are absolutely thrilled to be setting up It's All About The Girls in Ireland and to be doing it with Jessie Harrington is a no-brainer,” said Lawlor.

“Importantly, we want all the syndicate members to have a lot of fun and the process starts now as we head to the Orby Sale in hope of purchasing a couple of yearlings. Choosing your horse at the sales can be so exciting and we will have some of the signed-up syndicate members with us this week to be part of that process.”

She continued, “We have been so incredibly lucky with Global Glamour and for her to be awarded New South Wales 3-year-old of the year was quite incredible, but it's the group of 40 women who have been involved right from the start which has made it such a lot of fun. Since the syndicate first started, it has now become a real community and we would love to see it grow.”

The Irish partnership, which hopes to race two horses, will consist of up to 20 women, with each member paying an initial buy-in price of €6,000, including training fees for the first year before a supplementary fee of €2,500 for the second year.

“I think this is a terrific idea and I am not only delighted to have been asked to train for the syndicate but really looking forward to it,” said Jessica Harrington. “Any unique and innovative ways in which to attract new owners into our sport should be embraced and I am in no doubt we will be having a lot fun along the way.

“The process of becoming an owner should be the most brilliant experience from the moment you sign up and Its All About The Girls is a great example of this. I only hope that we can find a horse half as successful as Global Glamour.”