Inside the Winner's Circle: West Coast 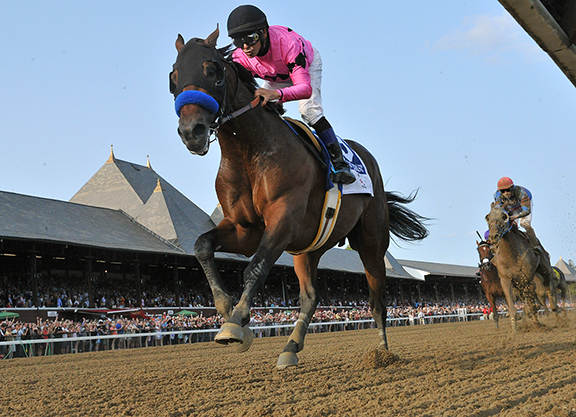 Owners Gary and Mary West were understandably over the moon after watching West Coast (Flatter) carry their colors to a wire-to-wire victory in a talent-packed renewal of the GI Travers S. last Saturday.

“It was exciting. That's all I can say,” Mary West said in a post-race press conference. “I could hardly walk down the stairs.”

In more than 30 years in the racing game, the Wests have enjoyed many high-level successes, including New Year's Day (Street Cry {Ire})'s win in the 2013 GI Breeders' Cup Juvenile, but Gary West admitted West Coast's Travers win was extra special.

“Truthfully, we won the Breeders' Cup Juvenile, and that was a very exciting thing to do,” he said. “But next to the GI Kentucky Derby, this would have to be the most second coveted thing on our racing bucket list.”

The story of the Wests' first Travers victory started two years previously when racing manager Ben Glass purchased the colt for $425,000 at the 2015 Keeneland September Yearling Sale. The son of juvenile filly champion Caressing (Honour and Glory) (hip 1206) was one of 26 yearlings purchased by Glass, and his second highest acquisition at the auction.

The colt has a deep female family and was a striking individual, but Glass admitted he had one reservation about the yearling.

“Obviously, I liked him a lot,” Glass recalled Tuesday. “But we don't usually buy that late a foal. I just looked back at my catalogue page and I saw at the top I had May 14 circled and then under that I had written, 'But I really like him.'”

“So I went out on a limb because Mr. West doesn't like to buy foals [born] after May 10,” Glass continued. “So with that said, on the page I had written, 'Very athletic, athletic walk. Love him.'”

Sent to Ocala for his early training, initial reports on the colt were promising.

“Jeff Kirk, whose been breaking our horses for us for about 25 years, always told me the horse was something special,” Glass said. “He saw it early on. So when we came down to look at him, there were four or five in the bunch that Jeff really liked and he was one of them.”

A narrowly beaten second while making just his third lifetime start in the GIII Stonestreet Lexington S. at Keeneland, West Coast took a Santa Anita optional claimer at Santa Anita in May before returning to the stakes ranks to win Belmont's Easy Goer S. in June and the July 15 GIII Los Alamitos Derby. The Travers was by far the biggest test of West Coast's young career, but Glass was confident the colt was up to the task.

“I told Mr. West, I don't want to jinx it, but I think he's going to run a big race,” Glass said. “I didn't think he would go to the front and win by that big a margin. I thought it would be a lot tougher race than that. He proved me wrong there, but I really did like him going into the race.”

For his part, it sounded like Gary West was taking a more guarded stance going into the Travers.

“I didn't think the first couple, three races that he ran–to be honest with you, I didn't think we'd be sitting here today having won the Travers. We knew he was nice, and then when Mike [Smith] rode him in the Easy Goer, he really kind of woke up on that day, and then he won the Los Alamitos Derby,” West said. “It was a 1 1/8 mile-race, and he ran about a 1 1/4 mile in the race. So we knew he could run a long distance. He's been progressively getting better.”

“I've watched the last couple of his breezes with Bob [Baffert],” West continued. “He's been progressively getting better. He's been working with some really older, high-caliber stakes horses and working head-to-head with them. I thought he had a decent shot in here, but you've got to remember you've got the winner of the Derby, the Preakness, the Belmont, the first and second finishers of the Haskell, the first and second finishers of the Jim Dandy. You have to go back a lot of years in history to see a Travers with this many quality horses in it.”

At the end of the day, West Coast came home largely unimpeded, winning the 148th Travers by 3 1/4 lengths.

Of the experience of watching a horse he selected coming down the stretch in front in the historic Travers, Glass said, “I can't explain it–it's the greatest feeling. But you know what, if I have a $25,000 claimer win, I get all excited. Whenever our horses win, I get excited, but I can't tell you how I felt with that horse because I was really excited with that horse. To win the Travers…that's like wow.”

Connections are taking their time in discussing West Coast's next start. “We have a conference call tonight,” Glass said.

“You've got to go with your trainer the most and Bob Baffert is pretty handy at knowing what to do with the horse,” Glass said. “So I don't try to get into that too much. I just sort of leave it to Mr. West and Bob. Bob is usually not wrong. He usually knows what is going on. I trust him 100% and I leave it to Bob.”

With three different horses winning the 2017 Triple Crown races and with no consistent sophomore taking charge of the division, the discussion of champion 3-year-old is muddled to say the least. Still, Glass thinks West Coast has put himself in the conversation with his Travers victory.

“He was a May 14 [foal], so we couldn't push him,” Glass said. “I guess it depends on the couple of races left in the year, but he beat the winner of every Triple Crown race, the first and second in the GII Jim Dandy and the first and second horse in the GI Haskell. So I don't know where they'd put him, but that sort of puts him pretty close to the top, in my opinion.”