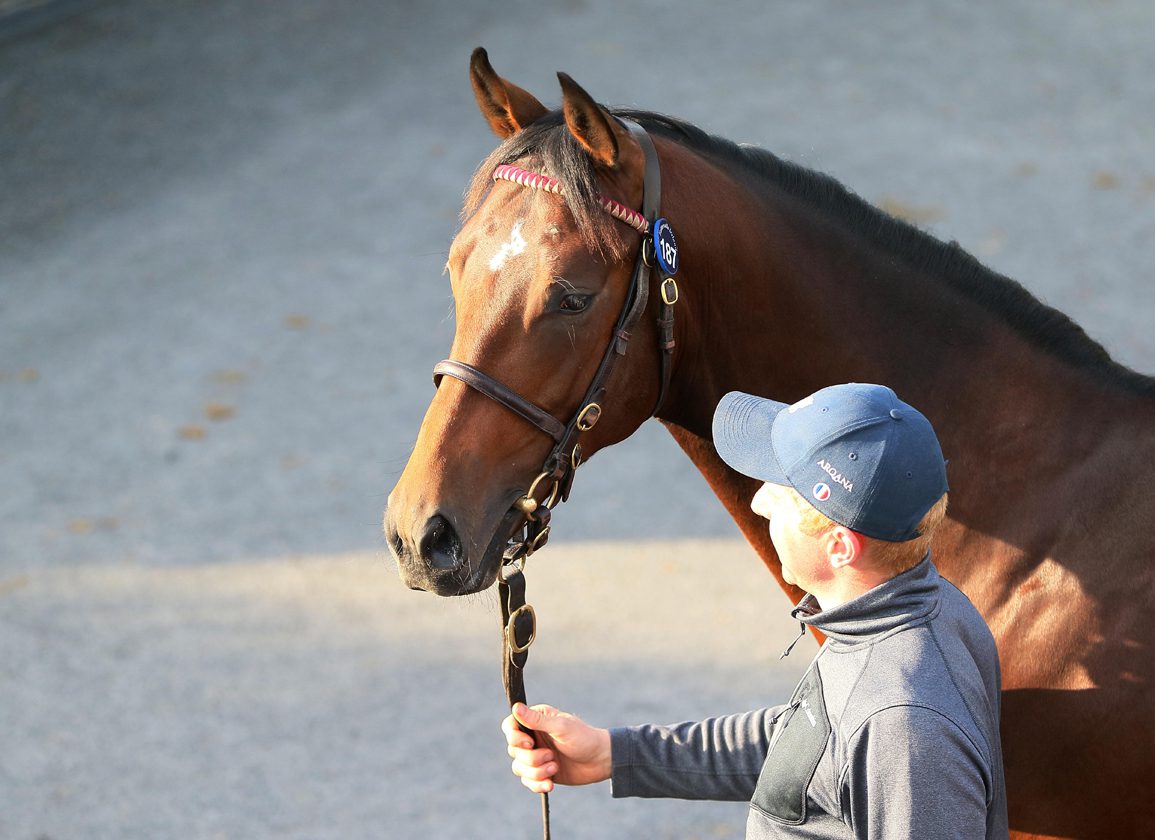 Lot 187: the Inns Of Court colt was knocked down to Manor House Farm | Tattersalls

RATOATH, Ireland–John and Jess Dance continued their recruitment drive on day one of the Tattersalls Ireland September Yearling Sale, signing for three colts, including the €110,000 session-topper by Tally-Ho Stud's first-season sire Inns Of Court (Ire).

Having struck for colts by Mehmas (Ire) and Invincible Army (Ire)–lots 33 and 34–early in the afternoon, the husband-and-wife team added the Mountain View Stud-drafted colt (lot 187) to their team, signed for by Ed Sackville on behalf of Manor House Farm.

Sackville said, “He is a lovely stamp of a horse and a really big, strong and imposing type. I have never seen so many people bid on one horse.

“Inns Of Court is an unproven stallion, but he is by a proven sire of sires in Invincible Spirit (Ire). If he is anything like Tally-Ho Stud's recent first-season sires then he is going to have a very good chance of being successful. I would hope we are safe hands.”

The day's top lot is out of Silk Fan (Unfuwain), a three-time winning and twice listed-placed filly who reached a rating of 95 in her pomp and has become a proven producer of talent as a broodmare.

He was bred by the Silk Fan Syndicate, who have almost exclusively sent the mare to Tally-Ho stallions in recent years, with a filly foal by Inns Of Court on the ground and the mare reported to be in foal to Starman (GB).

Silk Fan is the dam of seven winners, including the Group 3-placed Haikbidiac (Ire) (Kodiac {GB}), and is a half-sister to the G2 Flying Childers S. winner Gutaifan (Ire).

€ , @tatts_ireland @DanceThorobreds bought this colt by first-crop sire Inns of Court who stands @HoStud. He was consigned by Mountain View Stud & has G1 horses on the page. pic.twitter.com/H31kBi9q00

Manor House Farm spent more on average at €85,000 than anyone else did at Fairyhouse on Tuesday but Joe Foley came out top on overall spend at €278,000 for four lots on a day where the strong demand that was seen for yearlings at Arqana, Goffs UK and Tattersalls continued.

Not only did Inns Of Court supply the top lot on the day, but he also ended proceedings on day one as the leading stallion on overall figures, with the seven lots consigned by him netting an average of €37,857. The total spend on the seven lots was €265,000, just €10,000 more than the six yearlings by Sioux Nation made in total at a higher average of €42,500.

Another first-season sire, Invincible Army, came out well on the figures with five yearlings recording an average of €50,600 and a hugely respectable total of €253,000.

Relief was the overriding emotion experienced by Michael Tallon after lot 57, a colt by Havana Gold (Ire), fetched €95,000 less than a year after the consignor picked the beautiful chestnut up for just 19,000gns at the Tattersalls December Sale at Newmarket.

“It's pure relief. That is probably the best way to put it as we were a little bit apprehensive before the sale,” Tallon said.

“So many things can go wrong from the time you buy them as foals to when you get them to the yearling sales. When you get them here, you can only hope the buyers turn up.”

And that they did. Joseph O'Brien, Ross Doyle and Kevin Ross all fought hard for the Havana Gold colt. But it was Ross who wanted him most at €95,000.

“I'll tell you what gave us great confidence, Tallon said, “was the number of vets he had. We knew there were a lot of people interested in him and I didn't hear one bad comment about the horse from anyone inspecting him. Everybody was very complimentary of him.”

Streets Of Gold (Ire) has done his bit to highlight the prowess of Havana Gold as a sire in recent times by extending his winning sequence to four in the valuable Tattersalls-sponsored sales race at the Curragh on Irish Champions Weekend.

El Caballo (GB) has also flown the flag for the Group 1-winning stallion this season and Tallon has long felt that his colt can do his bit for the Tweenhills resident when he hits the track.

“As soon as I saw this fella at Newmarket, I liked him. He was stabled down in Solario and, when I spotted him on the Friday, I thought he was a racehorse. Saturday was a dirty afternoon and everybody must have been in the bar. I can remember standing in the rain and watching him–the stride on him was tremendous. He had a great walk and, while he had a good page, it wasn't exceptional, but he had a great presence about him.”

Tallon added, “Percentage-wise, this is up there with one of my best results in racing, to turn 19,000gns into €95,000. One good result can pay for the rest of them. We're delighted and the best could yet be to come because we have a lovely Havana Grey colt (GB) [lot 265] to sell tomorrow.”

Consigned by Michael Tallon, Kevin Ross @annarossKRB was the winning bidder for this colt by @Tweenhills Havana Gold. He cost 19,000gns as a foal. pic.twitter.com/T4i2O4gUDS

It was John and Sheila Lavery (brother and sister) who struck the winning bid at €100,000, with the trainer revealing that she thinks the price tag represented value.

Lavery said, “This horse was the standout for us–he has a lovely attitude, he was up here watching everything with his ears, looking around but going forward the whole time. He is a very straightforward horse. He is for John and I will train for him. We will know this time next year if he is value or not but I think we got value.”

Lavery added, “He is a big horse, but he looks forward enough, but until you put the saddle on their backs and start to canter them you don't know whether they will be early sorts or not.”

Fonzo told the TDN on Tuesday about how Coole House Farm came to acquire the Group 3-placed Sciolina (Ire) (Oratorio), the dam of Erosandpsyche and listed winner Some Respect (Ire). Dreeling couldn't hide his delight over the hammer falling Lavery's way at €100,000 and labelled the trainer as one of the best in the business.

“The horse is going to a brilliant trainer-Sheila Lavery is a top-class trainer,” he said. “She loves him, she came to see him four or five times. The Danehill and Footstepsinthesand cross is a very successful and proven cross which is why we decided on the stallion for the mare–and we are also huge fans of Footsteps, we have been so lucky with him. This will help pay the bills and keeps the operation going.”

Coole House Farm does it again with a son of Footstepsinthesand @coolmorestud. This colt had a timely update before the sale and was bought by John and @sheilalavery. pic.twitter.com/E6HCS3MAO9

A quick glance at Laura Joy's Twitter bio and you will see the words, 'aspiring pinhooker.' Well, Joy needn't use the word aspiring anymore after transforming her Tasleet (GB) colt (lot 125) from a 2,000gns foal into a €43,000 yearling.

It was the type of result that even the shrewdest of pedigree buffs would have been proud of and, for Joy, she described the sale as 'life-changing.' Not least because the Tipperary-based Business and Law graduate recently bought a house near Fethard.

There is also the small matter of a car loan that needed paying off, but such financial concerns were confined to the rear-view mirror as soon as that hammer fell the way of Highflyer Bloodstock for the Boherguy Stud-drafted yearling.

Joy said, “It's genuinely a life-changing amount of money. He was bought by Anthony Bromley of Highflyer, who is probably one of the best judges in the game, so I'm delighted.”

She added, “He didn't sell for 5,000gns at the December Sale at Tattersalls and my good friend Padraic Gahan brought me down to see him. The owner didn't want to bring him home so we were able to get him bought for 2,000gns.

“There was nothing wrong with him but I suppose people were a bit cold on the sire at the time because he didn't cover a lot of mares and maybe they were wondering if he'd take off or not.

“I wasn't as worried, though, because I worked for William Haggas and then for Shadwell so I was a fan of Tasleet. Then, when Bradsell (GB) (Tasleet {GB}) came along and won the Coventry, that was probably the best day of my life.”

Jerry Horan, one of the main men behind the Tattersalls Ireland Goresbridge Breeze-up Sale-topper Brasil Power (Fr) (Dark Angel) in 2021, came to Joy's rescue back in January when her car broke down.

After taking a half-share in the colt when Joy needed him most, it was Horan who should have been thanking his good friend on Tuesday.

Joy said, “Jerry came in on the horse when my car broke down as I needed the money. We've been friends for a long time so it's great that it worked out. I have since bought a new car recently so the horse has paid for that.”

Condon Keeps It In The Family

Ken Condon made the Classic breakthrough when delivering Romanised (Ire), a son of Holy Roman Emperor (Ire), at fever pitch in the 2018 Irish 2000 Guineas and the Curragh-based trainer added a powerful colt (lot 91) by that sire to his string for €80,000.

Like Romanised, who now stands Haras de Bouquetot, lot 91 will carry the colours of Robert Ng after being snapped up from Lodge Park Stud.

The trainer said, “He is a very nice colt, from a good farm, he has a lot of size and quality about him and is an easy mover. He has been bought for Robert Ng, and he does come from the further family of Romanised so that was a big help, but he is a lovely individual in his own right.”

Condon added, “He handled himself well through all the proceedings. We will get him home and our own people will break him in and he will come into the main yard in January.”