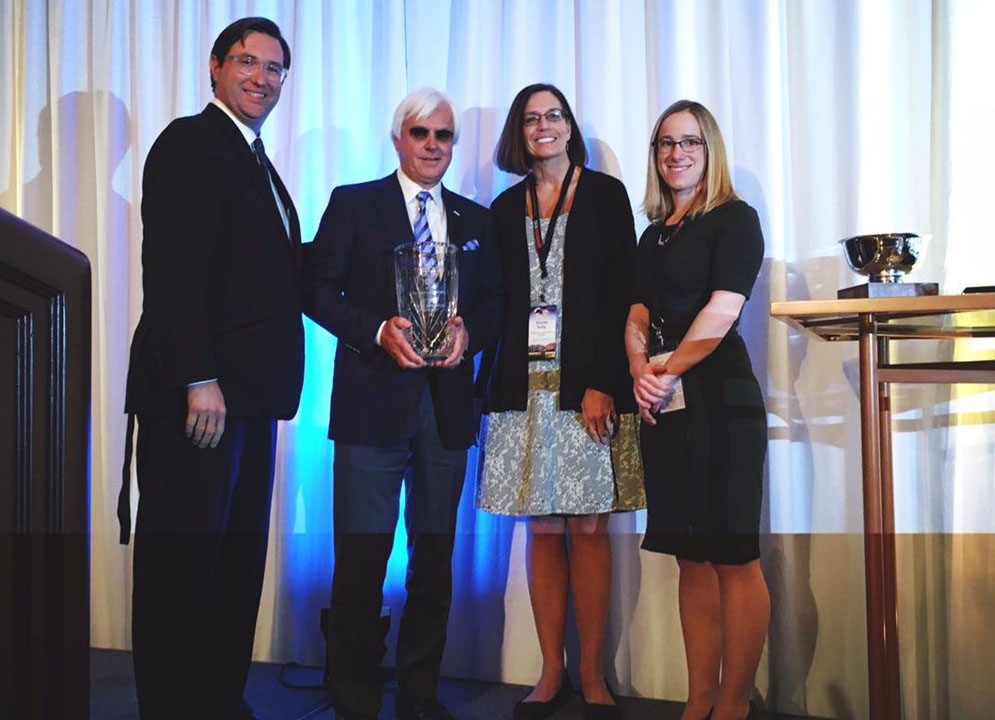 Racing should have “family only” areas at tracks that cater to “the often overlooked family friendly experience,” says Amy Zimmerman.

Zimmerman, the vice-president and director of broadcasting for the Stronach Group, was one of five panelists presenting innovative ideas at the opening session of the Global Symposium on Racing & Gaming, which began Tuesday in Tucson. It's the 42nd year that the University of Arizona Race Track Industry Program has conducted the late-year gathering.

Steve Koch, director of the NTRA Safety and Integrity Alliance, thinks that horse racing should be an Olympic event and said he believes that's realistic by the 2024 Olympics in Los Angeles.

“Thoroughbred racing is a global sport conducted on every continent symbolically represented by the five Olympic rings: North and South America, Africa, Asia, and Europe,” he said. He added that he could easily envision Olympic horse racing at Santa Anita.

Another idea was aimed at increasing pool size.

“Why not take $100 from the purse pool for each horse entered in every race?” said Darryl Kaplan, editor of Trot magazine for Standardbred Canada. “Place a mandatory $100 bet in the win pool on behalf of the owner of each horse. That increases the incentive to win and seeds every pari-mutuel pool, in turn driving up handle.”

Peter Rotondo, vice-president of media and entertainment for the Breeders' Cup, said that “Cash is not king at track.”

He pointed to Uber and Starbucks as examples of businesses that don't deal in cash and questioned why racing has not been faster to embrace a “swipe and bet” concept at tracks.

During a luncheon Tuesday, the Turf Publicists of America presented the “Big Sport of Turfdom” to Team American Pharoah. Bob Baffert, an Arizona native and trainer of the Triple Crown winner, accepted the award.

While posing for a photo with a group of students from the Race Track Industry Program, Baffert quipped, “If I can graduate from the University of Arizona, you guys can, too.”

In a later conversation with Zimmerman, Baffert reviewed the memorable season he enjoyed with American Pharoah.

Looking back on 2015, Baffert admitted, “I wonder what I did to deserve this horse.”

He said that the Kentucky Derby was the hardest of the Triple Crown events to win, but that he had far more confidence in American Pharoah before the Preakness.

Going into the Belmont, Baffert said he learned how hard past Triple Crown winners such as Secretariat and Seattle Slew were worked prior to the marathon event.

Baffert liked what he saw in American Pharoah's breeze efforts before the Belmont. Before the race, he told jockey Victor Espinoza, “If I don't have him ready, you can't win the race.”

American Pharoah was an easy winner in the Belmont and Baffert recalled how the grandstand “shook with noise” when his horse hit the wire.

Despite American Pharoah's upset loss later in the Travers S. at Saratoga, Baffert said that he relishes the atmosphere in the upstate spa community and loves the way that the townspeople embrace racing.

“People wanted to talk to me as I was walking down the street,” he said. “I felt like one of the Kardashians.”

The Travers loss made the Breeders' Cup Classic all that much more important for American Pharoah, and Baffert added that American Pharoah could have been retired before the Keeneland race.

Baffert admitted that he had a case of jitters before the Classic and was too nervous to attend many of the parties that were held on the eve of the race.

He admits now that his fears were unfounded.

“When American Pharoah turned for home at Keeneland,” Baffert said, “I wondered why I didn't go to all those parties.”

An interesting symposium session on how to attract new owners to racing was popular, and panelists noted that owners are often the most enthusiastic ambassadors for racing. So each time a new owners comes into horse racing, he often brings friends and family members along with him.

Andrew Offerman of Canterbury Park in Minnesota and Sophia McKee of Emerald Downs discussed the success of their tracks in creating racing clubs to permit fans to own a small percentage of a horse with a limited investment.

“We want to convert casual fans to regular fans, and regular fans to owners,” said Offerman, who is director of racing operations at Canterbury. “The only cost the track incurred in creating the Canterbury Racing Club was in legal fees to make sure that we complied with various laws. The reward is that every time the Canterbury Racing Club horse runs, we get 500 extra fans at the track.”

The Emerald Downs Racing Club, which is similar to its Minnesota counterpart, has 1,000 members at $50 per share. So many people want to join that there is a waiting list.

“We've had people buy shares in the Emerald Downs Racing Club and give them to people as gifts,” said McKee.

Ellen Harvey of Harness Racing Communications detailed the many owners seminars conducted by the U.S. Trotting Association. She said that almost 20% of the seminar attendees later purchased horses.

In addition to the presentations on the agenda, many vendors have set up booths at the Symposium to demonstrate their wares to prospective customers in the racing world. The meeting facilities at the Loews Ventana Canyon Resort are buzzing with activity as companies pitch their products and old friends reconnect.