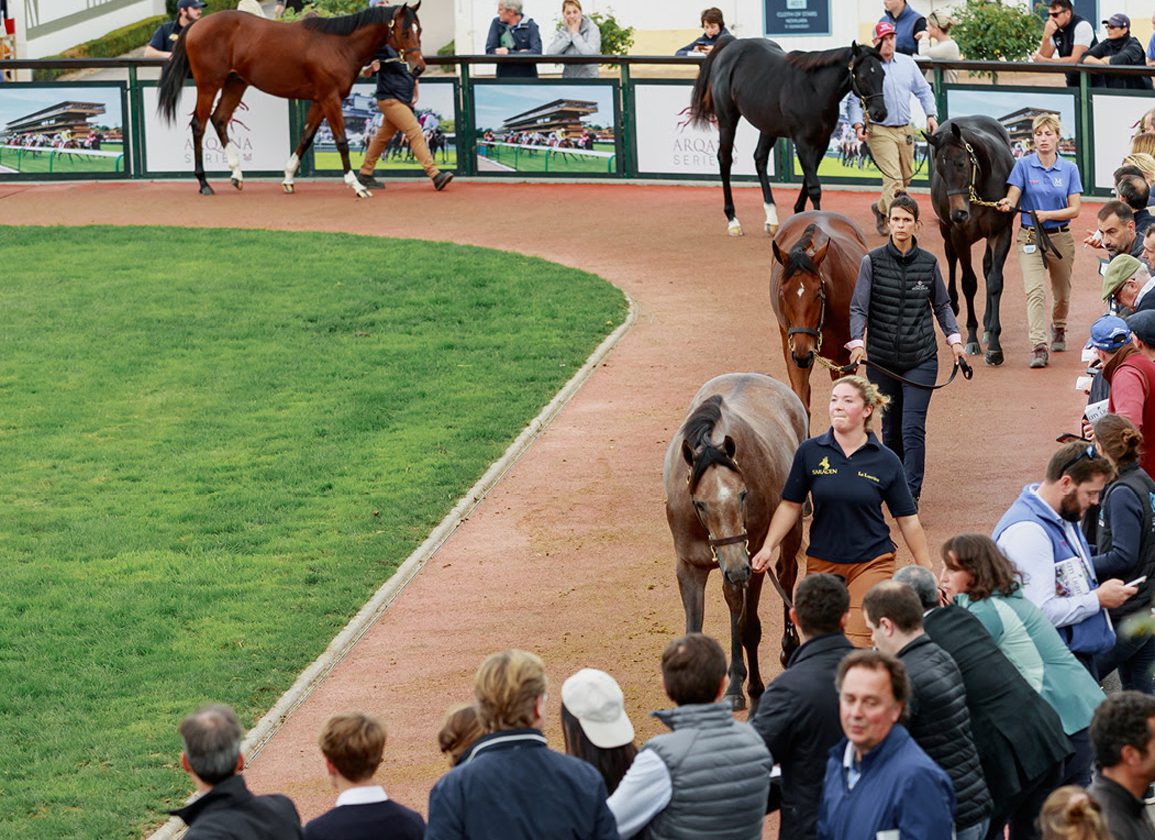 Horses parade prior to selling in Deauville on Saturday | Zuzanna Lupa

Topping proceedings was a filly by Toronado (Ire) (lot 74B) who was knocked down to Equos Racing/Josephine Soudan for €27,000. The bay was offered by Haras d'Ellon, and she was out of the winning Lawman (Fr) mare Valombreuse (Fr), herself a half-sister to the dual Group 3-placed Rajastani (Ire) (Zamindar). This cross has already produced the stakes-placed Miss Cleopatra (Fr).

The other lot on the day to break the €20,000 barrier was lot 79, a chestnut son of G1 Derby winner Ruler Of The World (Ire) out of the Dansili (GB) mare Ababeel (Fr), who won a ParisLongchamp 1600-metre race at three. Consigned by Haras de Castillon, the Jan. 18 foal was snapped up by Zdeno Koplik for €24,000. His second dam is the G3 Oh So Sharp S. second Light Up My Life (Ire) (Zamindar), who was also third in the G2 May Hill S. Farther back, this is the extended family of G1 Coronation S. heroine Fallen For You (GB) (Dansili {GB}).

Young sire City Light (Fr), who has his first juveniles in 2023, also provided one of Saturday's highlights in lot 53, a dark bay son of Sea Life (Fr) (Anabaa). From the Ecurie d'Auge draft, the half-brother to the multiple stakes-placed Sea Trial (Fr) (Panis) went to Gerard Larrieu for €18,000.

A brace of yearlings went for €16,000 each. First in the ring was lot 28, a colt by Guignol (Ger), who was the first foal out of New York (Ger) (Declaration Of War). Paul Nataf bought the relative of dual listed heroine North America (Ger) (Pivotal {GB}) from AK Presentation. Another son of City Light made the same price from Haras de Montaigu later in the session. Lot 107, a half-brother to the stakes-placed Dani Wallon (Fr) (Martaline {GB}) and the GIII Cliff Hanger S. third Il Segreto (Fr) (Turtle Bowl {Ire}) found a new home with the MAB Agency.