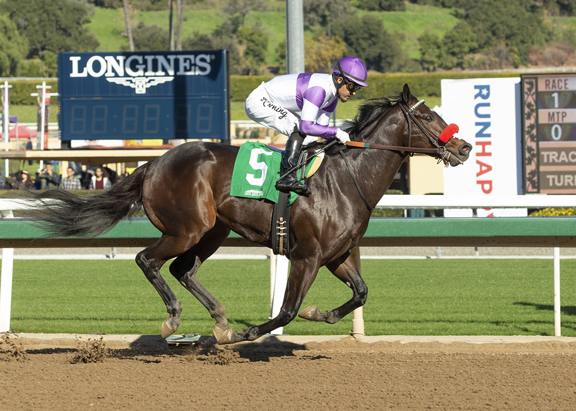 Devil Made Me Doit | Benoit

Devil Made Me Doit (Daredevil) put on a show with a ‘TDN Rising Star’ performance in the lid lifter on Santa Anita’s opening day program back on Dec. 28–feels like a lifetime ago, doesn’t it–but where has he been since?

“He came out of his race with a little P1 [ankle chip],” said Ciaran Dunne, who campaigns the 3-year-old colt in partnership with Reddam Racing. “We took it out and he went to Ocean Breeze-Mr. Reddam’s farm in California–to recuperate. We gave him a little extra time because all that was going on and not knowing when we were going to be racing again. He’s back at Santa Anita [with trainer Doug O’Neill] and we expect him to start breezing the first part of June.”

Purchased by Dunne and Paul Reddam’s Red Wings pinhooking partnership for $72,000 as a FTKJUL yearling, he was bought back for $245,000 after blitzing a quarter in a :20 3/5 bullet for Dunne’s Wavertree Stables at last year’s OBS June 2-Year-Old sale. He previously brought $43,000 from Stone Bridge Farm as KEENOV weanling. Bred in Kentucky by Ben Walden, Jr., Devil Made Me Doit hails from the extended female family of GI Metropolitan H. winner and inaugural Breeders’ Cup Dirt Mile winner Corinthian (Pulpit).

“He always was a nice colt,” Dunne said. “He had a couple of little setbacks through the spring, that’s why he ended up in the June sale. We went in and put a number on him that we felt was fair and also that we were comfortable racing him at. Obviously, we didn’t get it.”

The dark bay, the first foal out of Bible (U S Ranger), lived up to the billing as the 3-2 favorite in his unveiling, running up the score by 9 1/2 lengths while winning under wraps in front-running fashion at the Great Race Place, good for an 87 Beyer Speed Figure.

“Doug was always very high on the colt,” Dunne said. “The 2-year-old in training guy in me was getting anxious and thinking because it was October and November and we hadn’t run yet, that the sky was going to fall. He was ready to run at Del Mar and got an infection in his eye and missed a little time. It was just this, that and the other. Doug was like, ‘Don’t worry, don’t worry. He’s a good horse, we’re going to get him there.’ He showed up and did everything Doug predicted he would when he ran.

Dunne continued, “At that point, we were excited and high, but you know the racing business has a way of bringing you back down to earth. It wasn’t the end of the world, though. Doug is just taking his time letting him dictate the pace, and when the world opens up again, we’ll see where we go.”