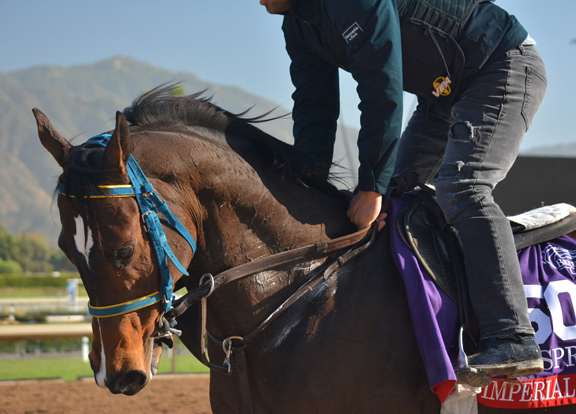 The “Little Rocket” is getting ready to blast off in Hallandale Beach, Florida, this winter.

Four-time Grade I winner Imperial Hint (Imperialism), forced to sit out a third straight appearance in the GI Breeders' Cup Sprint at Santa Anita Nov. 2 with a minor foot issue, is being aimed at the seven-furlong GIII Mr. Prospector S. at Gulfstream Park Dec. 21.

The 6-year-old entire returned to the worktab with a four-furlong bullet in :46.80 (1/27) at trainer Luis Carvajal, Jr.'s Tampa Bay base on Monday.

“He's doing good,” Carvajal said. “The horse was doing good when he was training at Santa Anita, too, and was 100%, but unfortunately they scratched him. It was a little upsetting, but there's nothing we could do about it. Just turn the page.”

Imperial Hint was a strong second in the 2017 Breeders' Cup Sprint at Del Mar and followed up with a flat third behind back-to-back winner Roy H (More Than Ready) as the 8-5 favorite in last year's Sprint at Churchill Downs. Mitole (Eskendereya) and Shancelot (Shanghai Bobby) put on a show in this year's renewal, with the former putting an exclamation point on a championship season with a 1 1/4-length decision.

Imperial Hint successfully defended his titles in both the GI Alfred G. Vanderbilt H. at Saratoga July 27 and GI Vosburgh S. at Belmont Sept. 28 prior to shipping to Arcadia for the Championships. Mitole was a well-beaten third in Imperial Hint's track-record setting performance in the Vanderbilt.

“Unfortunately, he had a little bit of irritation above the coronet band–it was like a blister there,” Carvajal said. “The horse's feet-his ankles and knees were ice cold–everything was fine and he trained good. But it wasn't good enough for the vets there. It was hard for me to understand, but Santa Anita Park is going through a tough time and decided to scratch the horse. I would've loved to have seen him run against Mitole again, he's a great horse. Imperial Hint came back good from the ship from Santa Anita to Florida and everything looks fine. He came out of the work Monday in really good condition.”

Plans call for the Raymond Mamone colorbearer to run as a 7-year-old next term, with intended early season overseas targets of the $1.5-million dirt sprint on the Saudi Cup undercard Feb. 29 and the $2.5-million G1 Dubai Golden Shaheen Mar. 28. Imperial Hint was a close third in this year's Shaheen.

“The horse is doing great and is going to be 7-years-old next year,” Carvajal said. “He's very sound and he still acts like he's 4-years-old. He's a racehorse. I haven't seen him slowing down at all. Hopefully, we'll have better luck next year. The way he's been training and running, I think we'll have another fun year for 2020.”