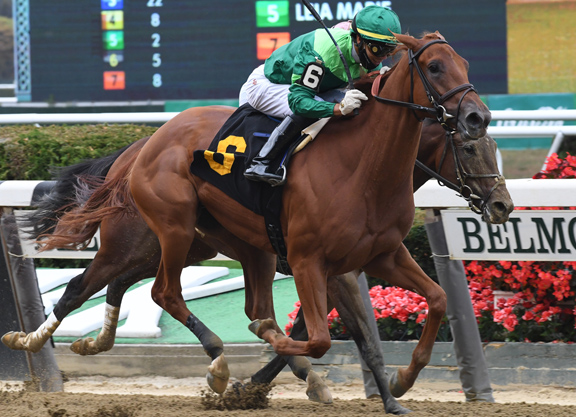 3rd-Belmont, $63,000, Msw, 9-26, 2yo, f, 1m, 1:39.43, ft.
AMERICAN WEST (f, 2, Curlin–Jacaranda {GSW, $207,200}, by Congrats), a $925,000 Keeneland September purchase, sat relatively handy to a strong pace, came calling for the lead three off the inside at the furlong grounds and withstood a late rails rally from Millefeuille (Curlin) to graduate at first asking Saturday at Belmont Park. Settled in a stalking third as favored Jouster (Noble Mission {GB}) set the pace from expensive Louisiana-bred Leia Marie (Exaggerator), American West, chilly on the board at 5-1, was asked to quicken at the quarter pole, set her sights on the leader entering the final eighth of a mile and was home 3/4 of a length to the good of Millefeuille, leading home a 1-2 finish for their sire. Leia Marie, a paternal granddaughter of Curlin who cost $400,000 at Fasig-Tipton Saratoga to rank as her sire's dearest first-crop auction yearling, held for third. American West's dam won the 2014 GIII Tempted S. for Barry K. Schwartz and Mike Hushion, but has seen her stock rise since, as her half-brother Constitution (Tapit) has become one of this country's top young sires. American West was the second most-expensive filly from Curlin's 2018 crop. Jacaranda is the dam of a yearling Medaglia d'Oro filly, a filly foal by Justify and was most recently bred back to Curlin. The cross of Curlin over A.P. Indy-line mares has resulted in the likes of GISWs Stellar Wind and Global Campaign. Sales history: $925,000 Ylg '19 KEESEP. Lifetime Record: 1-1-0-0, $34,650. Click for the Equibase.com chart or VIDEO, sponsored by Fasig-Tipton.
O-Peter M Brant; B-Alpha Delta Stables LLC (KY); T-Chad C Brown.