'I Just Love The Game,' – Pat Costello Shares The Story Behind Paramount Sales 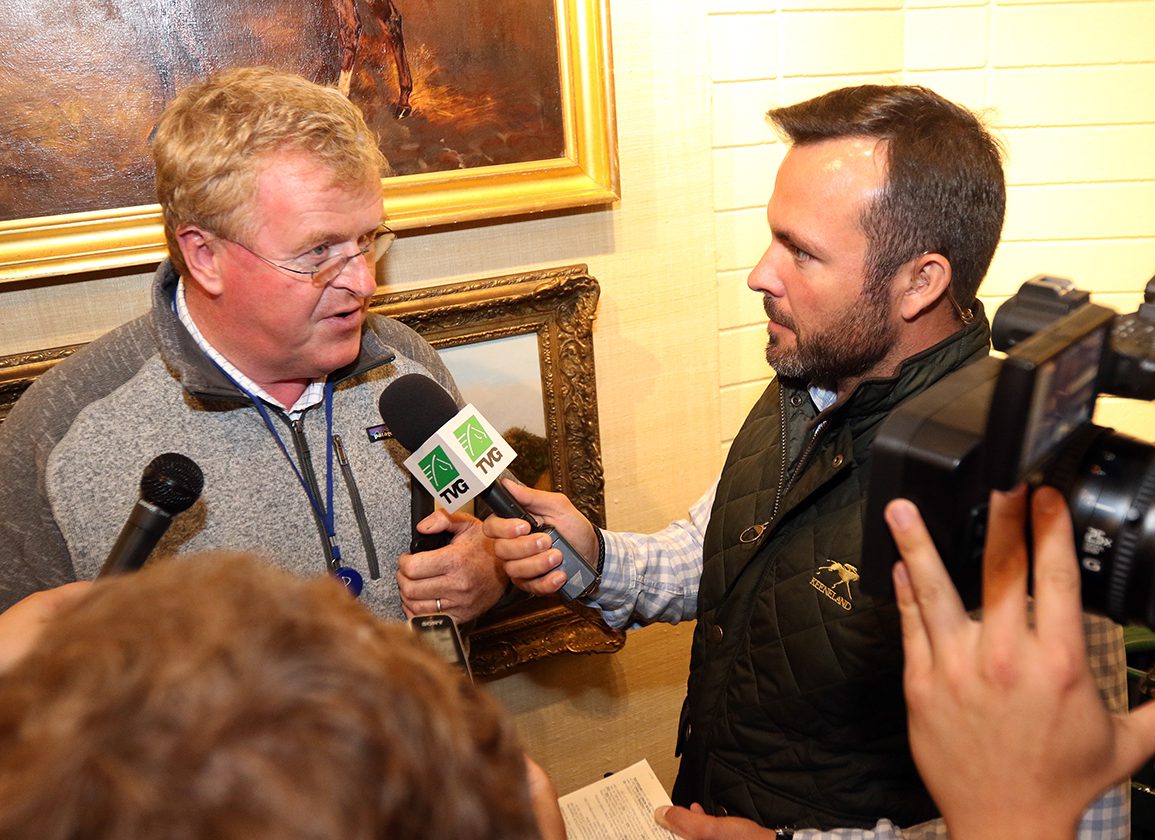 Paramount Sales has fast become one of the leading consignors in America with Jack Christopher, Life Is Good and Kameko an example of the recent graduates.

Pat Costello, who emigrated to America in 1984 and climbed the ranks in the industry before setting up Paramount Sales in 2001 with fellow Irish ex-pat Gabriel 'Spider' Duignan, shares all about his racing backstory in this week's Q&A.

From turning a profit pinhooking for 10 years on the trot to revealing what horses in the Paramount Sales draft he's most looking forward to at next week's September Yearling Sale at Keeneland, the top operator makes for an engaging subject.

Brian Sheerin: We know plenty about Paramount but tell us a bit more about yourself.

Pat Costello: America has been great to me, as has the horse business. I would consider America my home. I came out here in 1984 to muck out stalls and worked my way up the ladder in this business. I used the opportunities that came my way and ran with it. I spent a year working at Ashleigh Stud before joining an equine hospital as a barn foreman where I learned a bunch on the medical side which was great training for me. From there, I joined Crescent Hill Farm, and managed that for 10 years before setting up my own place. My wife and I rented a place just outside of Keeneland, called Drumkenny Farm, and we boarded for people there and getting all of the Sam-Son Farm mares was a huge boost for us at the time. They have been a top Canadian outfit over the years so that was huge. We were at Drumkenny for seven or eight years and Paramount evolved out of that. As the fella says, the rest is history.

BS: Who have been your biggest mentors?

PC: Michael Osborne was brilliant for me. When I arrived here, he was running North Ridge Farm and he was a father to all of us. He was instrumental in my career.

BS: And how did your relationship with Gabriel Spider Duignan, another Irish ex-pat, develop?

PC: Spider arrived in America about six months after I did. He started working with Bill O'Neill of Circle O Farm and was based just 15 minutes from me. We became fast friends and remain so to this day. There is a great Irish community over here and we all look out for each other.

BS: Yourself and Spider enjoyed a lot of success initially through pinhooking.

PC: None of us had any money starting out so, what we did was, we set up a syndicate made up of mostly Irish people. I think we gathered up roughly $40,000 and bought eight horses in our first year with that. We were working with tiny money, given to us by friends that we had built up, but managed to turn that into $80,000, so we doubled our money in that first year. We kept ploughing the money back in and got a few more people in on it and it ended up becoming quite a big pinhooking partnership. We decided after a few years that we could do this for ourselves so that's how it evolved. There's four of us still doing that now; Spider, Adrian Regan from Hunter Valley, Ted Campion of Dundrum Farm and myself. We pinhook a few together every year.

BS: We're knee-deep in the yearling season in America and in Europe. I know you are operating with a much different budget now than when you were just starting off but what are the most important things that you look for when buying a yearling?

PC: When we started, it was definitely a steep learning curve for us and we learned by our mistakes. We rely mostly on a good physical. If the horse has a good pedigree to go with the physical, we'll be happy with that, but our primary focus has been concentrating on the physical. That approach has been good to us over the years.

BS: Was there ever a moment where you thought you had cracked the code or can you ever think that way in this game?

PC: One of the last years of the syndicate, which we operated under the name, 'The Lads,' we had a powerful year. We bought one horse for $100,000 as a foal and got $900,000 for him as a yearling. There was another we paid $70,000 for and turned that into roughly $600,000. We thought we knew it all by the time the sales season rolled around the following year. But, what happened? We had our arses handed to us. Luckily we were young enough to take it and learn from it. You always have to be humble when buying these horses and you have to trust your judgment.

BS: Have you ever thought about dipping your toe in the European market given turf racing is expanding in America and there does not appear to be an array of turf stallions over there?

PC: We stick with what we know, which is why we concentrate on America. Personally, I think the turf sires over here are starting to get a little more recognition and the whole thing is expanding. Also, the American market, what they really want is to win the Derby, so it's the dirt horses that they want most over here. Even though Saratoga has nearly as many grass races as they do on dirt, and turf racing is definitely becoming more important over here, it's the dirt horses that prevail. But I would say that grass sires are certainly becoming more relevant in America, yes.

BS: It has been noticeable the amount of European buyers, especially on the breeze-up circuit, to have purchased yearlings in America in recent times.

PC: Yes, and they've done well. I do believe that there will be another boat load coming over this year as well. They are very sharp people who come over and they know what works. I think it works well and it provides them with an edge. They work hard at what they do and they're very good at it.

BS: Looking through some of the graduates of Paramount, we've already mentioned Jack Christopher, Life Is Good and Kameko, but could you identify any particular highlights?

PC: It's very special and we're so lucky to have some great clients who trust us with their stock year in and year out. They produce lovely horses and we get the privilege of selling them. Life Is Good, he's as good a miler that we've seen for a long, long time and Jack Christopher is an incredible 3-year-old. We have to pinch ourselves. It's been an incredible year. People see the results that we're getting and you get repeat business out of it. When people have had success buying from you, they tend to come back.

BS: And looking ahead to the September Yearling Sales at Keeneland next week, you have another strong draft to look forward to.

PC: We do and I will just highlight a few rather than listing them all out. Hip number 52 is an Into Mischief filly. She's out of Grade 3 winner Song Of Spring (Spring At Last) and is a beautiful physical with a page as well. The family goes back to Dream Rush (Wild Rush) and Dreaming Of Julia (A.P Indy). Malathaat (Curlin) is in the pedigree as well so it's hugely exciting. Into Mischief is one of the best sires over here, he gets it done every weekend, so we feel that she is one to look forward to and will be well-received. We also have a Munnings filly [Hip 112] who is quite exciting. Munnings has come up the hard way, I think he stood at $15,000 at one stage, and you couldn't get to him this year he was that popular at $85,000. This is a half-sister to the stakes-winning Stitched (Mizzen Mast), who runs in a Grade 2 at Kentucky Downs this weekend, so hopefully we'll get another update there. She's a beautiful filly. Lastly, Hip 272 is a Gun Runner colt, and this sire is phenomenal. As long as I have been in America, I have never seen a sire to do what Gun Runner has done in two years, and this is a really well-balanced colt by him. He has a great walk to him and, being by Gun Runner, he is as hot a prospect as there is. We have a lovely draft of 15 or 16 horses but they are the three I'd highlight.

BS: You mentioned the extraordinary start made at stud by Gun Runner. Obviously Justify is having a good start as well. Are there any other stallions whose progeny are of particular interest to you?

PC: Justify has got off to an incredible start and his stats are comparable to Gun Runner at the same stage of his career. He is hugely exciting, for sure. Not This Time is another. He was standing for 10 of 15 grand at one stage and the talk is that he will be standing for $125,000 next year. He's a brilliant horse and he's a stallion for the future.

BS: What gives you the most pleasure about your role?

PC: I just love seeing horses we've had here go on to do well. Especially with horses you've pinhooked, when they go on and become good racehorses, it gives you great satisfaction when they confirm your judgment to be correct. That's a great part of the game. I also enjoy the art of selling a horse and get great satisfaction about getting a good price on behalf of our owners. I just love the game. If we are not at the races ourselves, the television is on, and there's always racing on here. From top to bottom; breeding mares, pinhooking, seeing the new sires coming through, selling horses, every aspect of it, we're involved in. It's our passion. Some people have golf but I have horses and it's a pleasure to do what you love.