How a Horse With Panic Disorder Turned Into a Steeplechase Star 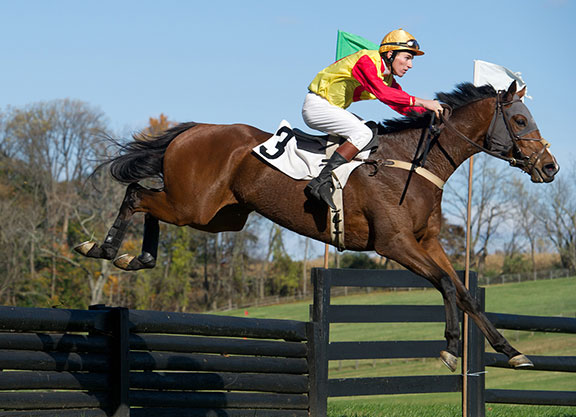 Flint Stites has been training on the Mid-Atlantic circuit for over 25 years, so he's seen plenty of difficult horses, but none quite like Senior Senator (Domestic Dispute).

“Mentally, he was just a mess,” Stites said.

So Stites wasn't the least bit upset when trainer Joseph Davies and owner Irvin L. Crawford II claimed the gelding out of a $7,500 maiden claiming race in 2013 at Penn National. His only concern was that Senior Senator, if not handled correctly, would seriously hurt someone, so he immediately called Davies to give him some pointers.

Stites already knew that the then 3-year-old was going nowhere on the flat. What he never could have imagined is that Senior Senator, mental issues and all, would turn out to be one of the best timber horses produced in this country in years and may eventually start in the Grand National at Aintree, England.

“Flint told us that he was the most difficult horse he had ever trained,” Davies said. “He has panic disorders and he is so strong and has so much power, so when they happen you better get out of his way. It doesn't matter where you are or where he is, he's going to get out of whatever confining area he is in. It can be frightening. He can be a gentle and lovely horse. But when he's not happy and his panic disorder kicks in, you better get out of way.”

For a horse with such issues, there's no worse place than the backstretch of a racetrack, where they are confined to a stall for 23 hours or so a day. Stites couldn't get the horse to go to the gate, couldn't get him to stop trying to throw his rider. Before his first start, he dumped the jock and ran off from the post parade. He realized Senior Senator would be better off on a farm, but he also hated being hauled from one place to another and would throw tantrums in the van. For Stites, he was 0-for-5 running in cheap maidens at Penn National, though he did finish second twice.

Davies didn't want Senior Senator because he was good enough to run second in a $7,500 maiden claimer. Though he knew nothing about the mental issues, he saw a “big, robust” horse he thought he could turn into a quality jumper.

“The horse has a very long stride,” Stites agreed. “From just the few times we had him on grass on the farm he really excelled over the grass and he showed he was a natural jumper. He can sail. Even in the fields, he would jump over the fences.”

About a year after claiming the horse, Davies put him in his first steeplechase race, a hurdle event at Fair Hill, and it was a disaster as he lost his rider at the fifth jump. There was only one thing left to try: timber racing.

When most racing fans think of steeplechase racing, they think of the type they have at Saratoga, which is, really, a hurdle race. The horses don't have to go over the tops of the jumps, they just have to get through them. They are made of brush and the best jumpers don't clear them but attack them. In a timber race, the fences are made of actual timber and can be as tall as five feet. A horse must soar into the air to get over them.

“The difference between a timber horse and a hurdle horse is their jumping ability,” said Davies, who is married to former top steeplechase jockey Blythe Miller. “Their jumping ability is a little different. The timber horse needs to be more careful jumping timber fences because they are stiff and they can't brush through them. The hurdlers are a little bit reckless or more efficient; they just barely clear the frame. A horse that is a really spectacular jumper will gallop around and jump over that five-foot fence like they are allergic to wood. That same kind of horse is probably going to spend too much time in the air to be an effective hurdler.”

Davies decided to turn Senior Senator into a timber horse, but first he had to figure out how to deal with his issues.

Being away from a standard racetrack setting was a huge help. Senior Senator spends almost all of his time turned out at Davies's farm in Maryland. When he takes him to a hunt meet, he is given permission to keep him out of the receiving stalls.

“That was the key to this horse, allowing him to be turned out all the time,” Davies said. “That's what transformed him. At the races we had to figure out a system that works and we're still working on it. At Butler (where he won this year's American Grand National), we had three or four people dealing with him. They gave us permission where we didn't have to go into a stall, just as long as we stayed in the receiving area. Those temporary stalls they put up at the hunt meets, he can tear those to the ground.”

It took a while, but with Senior Senator, Davies has found the perfect outlet for the horse. He is a very good at what he's now doing. He's never crossed the wire worse than second in a timber race and won last year's Maryland Hunt Cup, by far the most prestigious timber race in the U.S.

He even caught the attention of the 60 Minutes crew, who featured him in a story hosted by Charlie Rose they did last week on U.S. timber racing.

Davies has turned the once-cheap maiden claimer with mental problems into the best timber horse in the country and he will be the horse to beat Saturday as he tries to defend his title in the $100,000 Maryland Hunt Cup. But being the best timber horse in the country only means so much. There are so few races for timber horses that Senior Senator only ran twice last year and may do the same this year. Those who do this definitely don't do it for the money, but for the pride, prestige and thrills.

“You can't make any money doing this,” Davies said.

Saturday's race will be the 121st running of the Maryland Hunt Cup, the lone race on the card. It is a grueling four miles and there are 22 fences.

The ultimate accomplishment for a Maryland Hunt Cup winner is to go to England and win the Grand National. It's been done twice, by Jay Trump in 1965 and by Ben Nevis in 1980. Jay Trump, like Senior Senator, was a failed flat horse, purchased for $2,000 after he floundered in maiden claiming races at Charles Town. And, when it comes to the Grand National, it's not just about the prestige. The purse is £1 million. Davies said he's definitely interested in going, but may wait until 2019.

In the meantime, he'll focus on the few timber opportunities available here for Senior Senator. That and keeping his fragile psyche from becoming an issue.