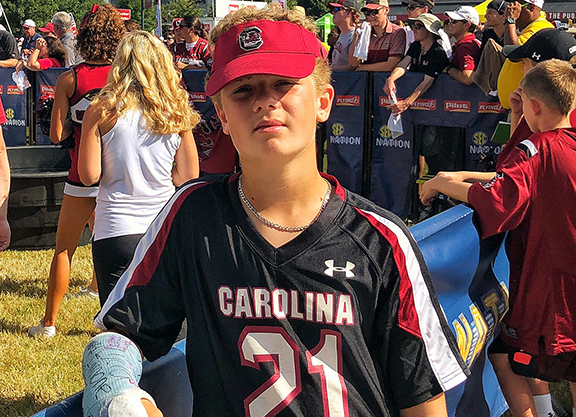 Jake Panus will not be at his father's side Saturday watching the GI Kentucky Derby. His life ended at an all-too-young 16 last August when he was a passenger in a car involved in a DUI accident on Block Island, just off the coast of Rhode Island. But his friends, his family and a Kentucky Derby trainer have made sure that he will not be forgotten this week at Churchill Downs.

Derby contender and GII Louisiana Derby winner Hot Rod Charlie (Oxbow) has been equipped with a special blanket honoring Panus, whose father, Stephen, is the president of TJC Media, which produces the America's Best Racing website and content. The blanket features a University of South Carolina logo and Jake Panus's initials on one side and a bear logo on the other, a recreation of a necklace Panus wore.

The South Carolina Gamecock logo is meant to spread awareness for The Jake Panus Walk-on Football Endowed Scholarship, which was set up by the Panus family to provide financial assistance annually for a player who walks on to the South Carolina football team. Entering his junior year in high school at the time of the accident, Panus dreamed of attending South Carolina, his father's alma mater.

“Jake was raised a Gamecock, if you will,” Stephen Panus said. “He grew up watching their games with me, no matter the sport. He certainly identified with college football, which is a big deal in our family. Jake epitomized that walk-on type mentality. He was a gritty athlete and a vocal leader. He was someone people gravitated towards and he had a lot of moxie and hustle on the field as an athlete.”

The younger Panus was visiting with his girlfriend's family when the accident occurred. Some seven months later, the family is doing its best to navigate its way through an unspeakable tragedy.

“We're surviving,” Panus said. “I do these things because it keeps me connected to Jake and it's part of my healing. It is hard, though. It is emotionally draining. I'll take a phone call with someone, talk about it and break up. I cry a lot. My wife (Kellie) is struggling. It's been very hard on her. For a mom who carried a child in the womb, it's probably the most painful thing you can go through.”

By all accounts, the teenager was exceptional in many ways.

“Jake cared about helping people,” Panus said. “He was that kind of kid. People gravitated to Jake and he was a born leader. When he walked into a room, you knew it. He was a big, bright light and always had a smile on his face. He loved to laugh and he made people feel welcome, no matter who they were, friend or stranger. He was there to listen and help.” 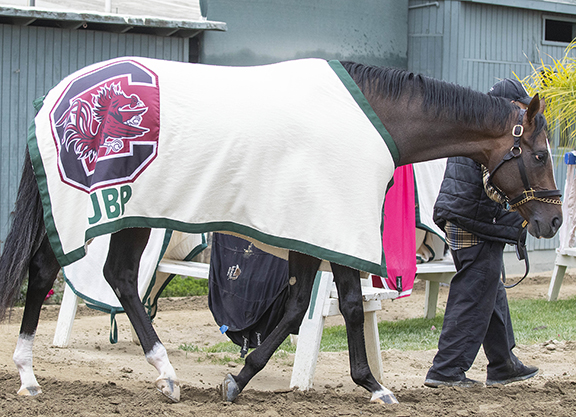 Shortly after Jake's passing, the family established the Jake Panus Memorial Scholarship in partnership with their church, Southport (CT) Congregational Church. During the summer of 2019 Panus participated in a church mission to the Pine Ridge Indian Reservation, where he aided and assisted Native American children. The scholarship provides educational assistance to students from the reservation's Red Cloud High School.

The Panus family also wanted to do something honoring Jake's passion for the University of South Carolina and its sports teams. In late December, the family got a call from head football coach Shane Beamer, who had heard about Jake and the accident and wanted to do something to help. It was soon thereafter that Beamer, the school's athletic department and the Panus family came up with the idea to start a scholarship for walk-on football players.

“I was a walk-on. Those guys are partial to me,” Beamer said. “We [are intent] about trying to find guys and sell them on what a fantastic opportunity this is at Carolina. That will always be a critical aspect of this program; get guys in here as walk-ons, develop them as players and student-athletes and get them on the field.”

Through his work with America's Best Racing and The Jockey Club, Panus had befriended Doug O'Neill. The trainer reached out to the family to tell them he would like to help in some way. When Hot Rod Charlie won the Louisiana Derby, O'Neill knew he had a high-profile Kentucky Derby contender on his hands, which he thought was a perfect avenue to raise awareness for The Jake Panus Walk-on Football Endowed Scholarship.

“He started talking about doing a scholarship in Jake's name and I said 'how can I help?'” O'Neill said. “I wanted to do whatever I could do to help. So we had the blanket made for 'Charlie ' to help promote the scholarship. I knew Jake through Stephen. He was a friend to everyone, whether you knew him well or whether you were a stranger. We need more Jakes in this world. I wanted to help promote the scholarship in Jake's name. I'm proud and honored to have a horse that can help spread the word.”

The bear logo is from a pendant Jake wore as a necklace that symbolized his devotion to helping Native American children. To the Lakota Indians, the bear represents courage, confidence, healing and protection.

Within the first week after the football scholarship was announced, $75,000 had been raised. Thanks to O'Neill, the blanket and the spotlight that shines on the Kentucky Derby, the hope is that they are just getting started.

“What we are seeking to do is to raise awareness and procure donations to help to grow the scholarship fund so it is fully endowed,” Panus said. “We've gotten support from coast to coast and it has been overwhelming. It has been uplifting to us as a family to see people hop on board and understand what we are trying to do, which is to allow Jake to do something in spirit that he intended to do while here with us, which was to attend the University of South Carolina.”

Donations to the scholarship fund can be made here: https://donate.sc.edu/JakePanusScholarship.