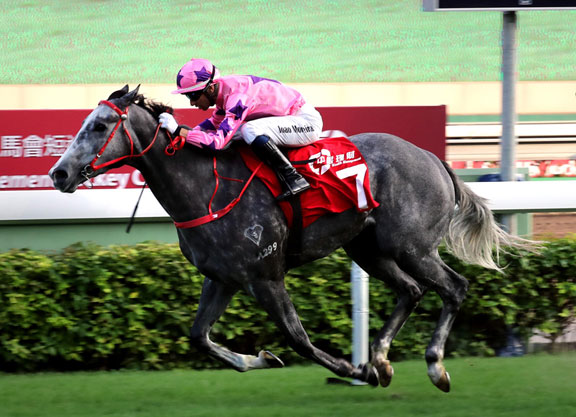 Waikuku, runner-up to the re-opposing Admire Mars (Jpn) (Daiwa Major {Ire}) in last year's G1 Hong Kong Mile and a latest third in the G1 FWD Champions Mile in April, came with a wide run from far back on the turn and kept on well to take the day's opening trial over 1200 metres (video), while the naturally speedier Hot King Prawn sat handier to the pace, took over a furlong and a half from home and was under little urging to score in the morning's third heat, with fellow Hong Kong Sprint aspirant Wishful Thinker (Aus) (I Am Invincible {Aus}) third (video). Waikuku and Hot King Prawn were put through their paces by Joao Moreira, who has the call on both horses on international day.

Size famously sent out Glorious Days (Aus) (Hussonet) to win the 2013 Mile off a lengthy layoff and believes Waikuku can be in the finish yet again.

“He's making some progress so go to the races and just hope he gets a sweet run,” the conditioner said. “He might grab some prizemoney. He's first-up for a long time and he's had some interruptions, but if you could get some prizemoney, I'm sure we'd be happy with that and we could proceed to the Stewards' Cup.”

Hot King Prawn, second to the now-retired ex-stablemate Beat The Clock (Aus) (Hinchinbrook {Aus}) in the Sprint, looks to be holding his form as he seeks a first top-level tally.

“He seems OK. He's sort of improving all the time. He's needed the racing to bring him on,” Size said. “He's a fairly gross horse and you can't push him, you've just got to wait for him and I think he looks OK to me.”