Home » Archive » Shared News » Horse of the Year, Championships, Up for Grabs in Breeders' Cup

Horse of the Year, Championships, Up for Grabs in Breeders' Cup 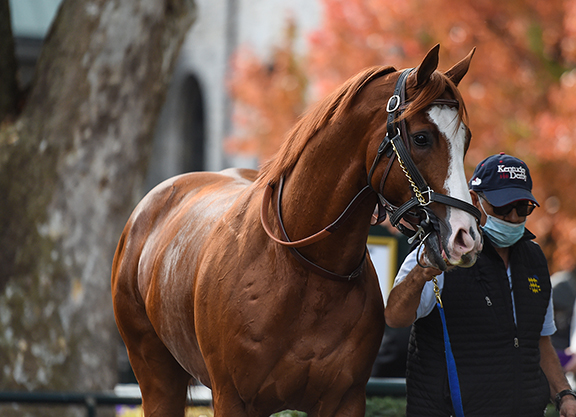 In an atypical year for horse racing in which COVID-19 has played havoc on just about everything, it will be a typical Breeders' Cup Saturday, at least on the racetrack. Including also-eligibles, 104 horses have been entered to contest the nine races that will be offered and the list includes a who's who of the best horses not just in North America but in the world.

Between the two days of racing, the Breeders' Cup could decide every Eclipse Award race but the 3-year-old filly championship, where Swiss Skydiver (Daredevil) is heavily favored.

“That's what the Breeders' Cup is about,” trainer Bob Baffert said. “The cream comes to the top.”

The Keeneland card begins at 10:15 am with the Perryville Stakes. The first Breeders' Cup race will be the GI Breeders' Cup Filly and Mare Sprint, which is set to go off at 12:02 pm. Television coverage will begin at noon on NBCSN. At 2:30, NBC will pick up coverage, with the show concluding at 5:30. It appears that the weather will be ideal. The Saturday forecast for Lexington is calling for sunny skies with temperatures in the mid-seventies.

Friday's late news included the announcement that jockey Christophe Soumillon had tested positive for COVID-19 and will be off his mounts.

Back in March, when the coronavirus began to upend life as we know it, holding events like the Triple Crown races or the Breeders' Cup was less than certain. By early summer, most major racetracks had resumed racing, but it was not quite the same. For the most part, fans were not allowed to attend and most tracks had to enact healthy purse cuts, especially when it came to their stakes schedules.

The Triple Crown races were held without fans in the stands and the Breeders' Cup has been forced to do the same. Owners and breeders will be permitted to attend.
“Without the fans, it didn't seem like the Derby until the gate came open,” Baffert said. “The Classic won't feel like the Classic until the gate comes open, not without any fans here.”
For the fifth straight year, the Classic purse will be $6 million. Without fans on track, this Breeders' Cup will bring in less revenue than a normal one, but the Breeders' Cup team has managed to put on the event without reducing any of the purses.

By the end of the card, after the GI Breeders' Cup Classic, scheduled to go off at 5:18, the championship picture should be a lot more clear than it was entering the day. No horse has put any distance between itself and the rest of the field when it comes to Horse of the Year, but at least four or five horses could claim the title with a Breeders' Cup victory.

The lists starts with Baffert's Classic starters. Authentic (Into Mischief), the winner of the GI Kentucky Derby, and Improbable (City Zip), a winner of three straight Grade I races, would be considered top candidates for year-end honors with a win. His third Classic starter, Maximum Security (New Year's Day), would also be part of the mix if he can pull off a victory in the Classic.

“The Classic horses are three pretty powerful horses,” Baffert said. “We've got a Derby winner, a 3-year-old champion and Improbable has won his last [three] races in great fashion. I've never been this strong before in the Classic. Usually, I'd be happy to have just one of those in the Classic. To have three is pretty amazing.”

Improbable is the morning-line favorite at 5-2 and Maximum Security is the third choice in the line at 7-2. Sitting between the two is Tiz the Law (Constitution). He is still another horse that could wrap up Horse of the Year with a win. That would also put him in the lead for the 3-year-old male title, a race that has come down to Tiz the Law and Authentic.

In a race that also includes Grade I winners Tom's d'Etat (Smart Strike), Higher Power (Medaglia d'Oro) and Global Campaign (Curlin), separating the field is as tough a handicapping puzzle as there is. The race could come down to who gets the trip and who is having the best day.

“This is a tough, tough race,” said Barclay Tagg, the trainer of Tiz the Law.

The Horse of the Year race also includes Swiss Skydiver, whose showdown with Monomoy Girl (Tapizar) in the GI Breeders' Cup Distaff makes that race another highlight of the afternoon. Swiss Skydiver has had a remarkable campaign that includes a win over males in the GI Preakness S. Should she win the Distaff and the Classic is won by a longshot, she would be in good position to be named Horse of the Year. And, regardless of the outcome of the Classic, some voters may decide to reward her for what has truly been a January-to-November campaign that is a rarity in the modern era.

But first, she must beat Monomoy Girl. The 5-year-old mare who won the 2018 Distaff only to miss all of her 4-year-old season, could not have come back better. Patiently handled by trainer Brad Cox with the Distaff in mind, she is 3-for-3 on the year and is coming off a win in the GI La Troienne S. With her perfect 2020, she has won 12 of 14 career starts and crossed the wire first in 13 of them.

Cox–poised with a strong hand this year and already with two winners on Friday–has been raving about how well his filly is doing, saying she is better now than when she won the Distaff two years ago.

“She's definitely got her game face on,” Cox said. “Anyone watching her train this week could see that. It's been very forward and she's put a lot into her gallops. She is ready. Her coat is great, she looks good and we are real pleased with where she is physically.”

Robby Albarado, who will have the mount on Swiss Skydiver, reports that his filly is also thriving coming into the Distaff.

“I want to say she's doing as good if not better than she was at Pimlico [for the Preakness],” he said. “She's moving really well. She's very confident. She's so smart about everything. She knows where she's at and what she has to do.”

The Filly & Mare Sprint will kick things off with another race that should decide a championship. The leading contenders for the Champion Female Sprinter are all in this race, including Gamine (Into Mischief) and Serengeti Empress (Alternation). Both are fast fillies and their riders, John Velazquez and Luis Saez, will have to figure out how to avoid a costly speed duel.

Just a few of the highlights on what figures to be a great day of racing near the end of a very long year.