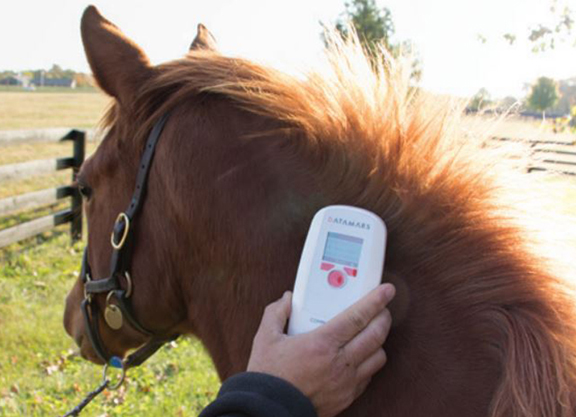 The scanning of a foal using the microchip | The Jockey Club

Microchipping is quickly becoming the global industry standard for equine identification, especially those being used for competition purposes. The FEI (the International Equestrian Federation–the international governing body of equestrian sports) began integrating microchips into the registration and identification process of horses competing internationally in 2013, and countries such as Australia, Germany, France, Great Britain, Ireland and New Zealand have been using microchips in Thoroughbreds for years. This past year the U. S. Equestrian Federation and U. S. Hunter Jumper Association began requiring horses be microchipped in order to compete in sanctioned competitions beginning Dec. 1, 2018.

It was in 2017 that The Jockey Club began requiring microchipping and digital registration of Thoroughbreds in the U. S., and that crop will begin racing later this year. Following suit, the Thoroughbred Racing Protective Bureau (TRPB) announced this past December that in 2020 any Thoroughbred making its first lifetime start will require a digital tattoo in order to race as traditional lip tattoos are phased out.

“We had some concerns that solely depending on microchipping might not be as robust as the current system with the lip tattoos,” said J. Curtis Linnell, Executive VP of the TRPB. “We took a look at what was being done internationally, and we also looked at the downsides of tattoos. They can get harder to read as they get older, they can be difficult to read prior to race time. We have so many more tools in the modern age that make things easier and more reliable for all involved.”

Digital tattoos can also aid in biosecurity practices and the prevention of disease spread, as the horse identifier will no longer be required to come in contact with each horse's saliva in order to identify all horses in a race.

While using microchips for registration and identification purposes will streamline many processes and provide many benefits to horsemen, officials, horses and even the racing public, in an industry spanning multiple generations, economic levels and digital savviness, adoption of new, more modern technology by some may be slow and met with some resistance.

Dr. Bart Barber, DVM, a shareholder with Rood and Riddle, says the benefits of microchipping versus traditional registration paperwork and tattooing are many.

“This is a superior technology for identifying horses,” said Barber. “Tattoos can fade or become difficult to read over time and verifying markings is not failsafe. Horses in the paddock on race day can be fractious and resistant to having their tattoo read, which can put them and others around them at risk. From the farm to the auctions to the races, this provides a permeant, dependable, easy way to identify horses, and I think over the years we'll have advances in the technology of the chip and how people use the information.”

The microchip, which is similar to a grain of rice in size, is implanted into the nuchal ligament in the middle third of a horse's neck on the left side and will last the duration of the horse's life. It is recommended that the microchip be implanted by a licensed veterinarian. It should be implanted at the same time the DNA hair sample is collected and photos are taken for registration.

Microchips have been used for years in small animals, and one of the most common issues that arises is the migration of the microchip from the implant site to other parts of the body.

“This is a real issue and it has happened in some cases,” said Barber. “There are different brands of chips now that are addressing that issue and putting features on the microchip that prevent them from migrating. We are in a new generation of chips that very rarely migrate.”

Andrew Chesser, Manager of Registration Services agrees that issues involving the malfunction of microchips are rare and that such concerns are far outweighed by the safety and integrity benefits of using digital technology for Thoroughbred identification.

“We anticipate the transition from lip tattoos to verification of a microchip number will modernize the identification process, minimize the risk of disease and open up additional resources to support identification of Thoroughbreds, such as review of photographs,” said Chesser. “Over time, it's reasonable to assume that owners, breeders and industry participants will adjust accordingly to realize these benefits.”