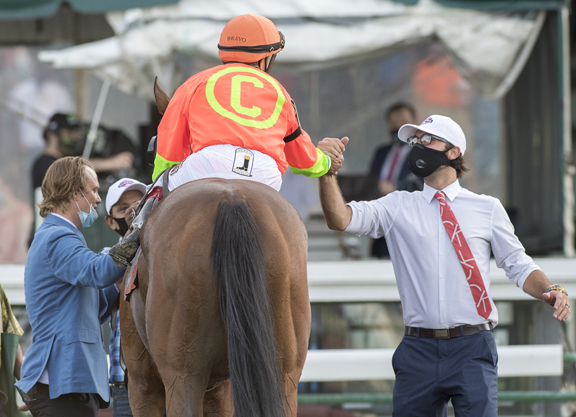 Dennis Drazin, who heads the management team that runs Monmouth, said that, for now, the suspension means only that Beatty is not allowed on the premises. However, he said further disciplinary actions could be taken after reviewing whether or not Beatty has also been violating rules by going on the backstretch.

“We have rules and they have to be followed,” Drazin said. “We have strict COVID-19 protocols that we submitted to the state and they submitted them to the department of health and they were signed off on by the racing commission and the governor's office. We were told we need to enforce our rules. Here you have an owner that decided to disregard the rules. He admits he disregarded the rules. It's not like he says he didn't know. He deliberately violated the rules.”

Beatty tells a different story, that he was not aware of the rules and was simply caught up in the moment after the horse he owns along with Parkland Thoroughbreds, Medallion Racing and Abbondanza Racing, LLC, won an important race.

“[Monmouth Racing Secretary] John Heims told me that I put the sport of horse racing in New Jersey at risk,” Beatty said. “I didn't intend to do that at all. I went down to the area of the winner's circle and I was excited. They told me grab your horse and bring her into winner's circle and I did that.”

Drazin was not sympathetic.

“He's gone out and posted things on social media and seems to be blaming everyone but himself,” he said. “But he's the one who violated the rules.”

Beatty, 28, acknowledges that he should have read up on the protocols in place at Monmouth, which are posted on the track's website, but insisted he did not intentionally break any rules.

“I'm not the type of person who starts trouble or ever gets into trouble or breaks a rule,” he said. “I try to do the right thing when no one is looking.”

Beatty and Drazin also disagree on how the process unfolded. Beatty said he asked Heims for a hearing and that Heims told him not to bother because there was no chance the suspension would be overturned. Drazin says that Beatty declined to have a hearing.

“We first wrote to him and offered him an opportunity to come in and discuss it,” Drazin said. “He elected not to. He admitted he violated our rules and told John Heims to do what he had to do.”

“They said I wanted no part of a discussion or wanted no part of a hearing and that is completely false,” Beatty said. “It makes me sick to my stomach because Dennis Drazin is someone with a ton of authority and I'm just a little guy here. I'm trying to do right thing for the industry and Jersey-bred racing, which is one of the reasons we brought Horologist back, to give a Jersey-bred a chance to win a graded stakes. I want a hearing. I want to give my side of the story.”

Drazin said that, in the aftermath of the incident, he heard from several people that Beatty had been violating additional rules by sneaking onto the Monmouth backstretch, which could lead to additional sanctions.

“We've told him he's not allowed here for the balance of the 2020 meet,” Drazin said. “Since he started posting things on social media, I have gotten a number of calls suggesting he's been violating our rules and sneaking on to the backside. I don't know if that is accurate or not. We're going to have to have a hearing on that.”

Drazin added that an additional penalty could be that Beatty will not be allowed to race anymore horses during the meet.

Beatty said that because of the incident, Horologist is no longer being considered for the Aug. 30 Charles B. Hesse III H. for New Jersey breds.

“Me and my partners agreed after this happened that we're not going to run here her in the Hesse,” he said. “This has put a bad taste in my mouth and makes me take a step back. I'm a big believer that the punishment should fit the crime. I didn't commit a crime. It was just me, the jockey and the horse in the winner's circle.”