Hoping for a Horse to Lighten Our Darkness 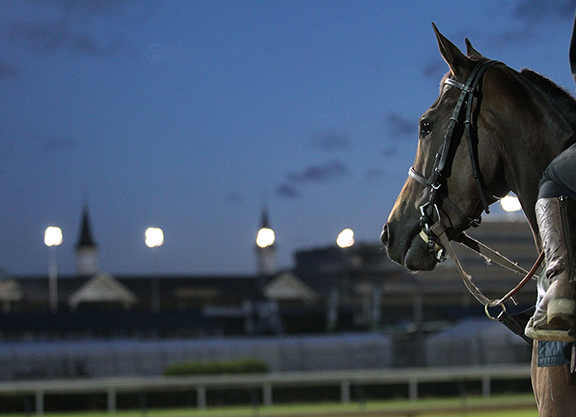 Will the Derby Give Us a Horse to Lighten the Darkness? | Coady photo

Main street? It’s a two-way street. And for the one horse race that truly engages the American nation, that is literally a mixed blessing. A blessing that mixes our own enchanted way of life, culpably introspective as it can be, with the passing traffic of the wider world.

Right now, between pandemic and protests, there is a lot of turmoil out there. Nobody should be surprised, then, if society’s discords have been filtering through the backstretch gate in Derby week: whether through the annual migration of mainstream media, or protestors seeking their attention outside the track, or indeed the reaction of horsemen to these intrusions.

Barclay Tagg is an octogenarian horseman coping with the stress of handling the final preparations of one of the hottest favourites in Derby history. And his instincts, as a rule, would sooner tend to taciturnity even on his own territory-where his exceptional expertise is eloquently measured, given his limited resources through a long career, by the mere possibility of a second Derby.

Many horsemen were doubtless vexed that one of their number, while expressing anxieties he might legitimately feel over security, should have meandered into the apparent conflation of peaceful protests and riots, and rightly so. But when did anyone, least of all the man himself, nominate Tagg as unusually eligible to judge or solve the grievous divisions of a nation?

When a good horse walks into your barn, he doesn’t tend to be carrying a public relations manual. To amplify Tagg’s views is unfair, because it treats him, politically, as something other than a random demographic snapshot; and, in implying that he represents a whole sport, it’s unfair on horseracing, too.

Wherever you happen to find yourself on the political spectrum, I hope you have a warmly affectionate relationship with someone-an obdurately conservative grandparent, say, or an aggressively radical niece or nephew-that you would nonetheless prefer not to be chosen as spokesman for your friends and family.

Certainly Churchill’s statement on Thursday could hardly have engaged more persuasively with the strife of its surrounding precincts, promising self-examination and self-improvement. As an Englishman, albeit one who feels so at home among them, I would not presume to lecture Americans on what may or may not be wrong with their country. I feel distressed by their divisions; and I do feel eligible to judge failures of leadership against rational and humane standards of universal application. But there are nuances of all this chaos that will necessarily be lost on me.

Even Kentuckians, after all, seem to have tangled the original threads of “My Old Kentucky Home”. There seem to be as many misapprehensions as misgivings about an anthem composed as a rebuke to slavery and a lament over its sorrows, according to this week’s Smithsonian Magazine Article, “The Complicated Legacy of My Old Kentucky Home.”

Anyhow, people in houses as lavishly glazed as England today should not throw stones. What I do know is that the 2020 Kentucky Derby visits onto our industry’s doorstep an unhappily authentic sample of the discontent of these times. Never mind the politics: those echoing stands will serve as a baleful reminder of our desperate need, collectively, for some redemptive exhibition of the nobility and inspiration we discover in the Thoroughbred.

Actually, for all the credit we owe those who have worked so hard even to get a show like this safely on the road, some words of reproof must also be heard in the eerie silence that will, unavoidably, complicate the emotions of those who achieve a career pinnacle with the 146th Derby winner.

Because the September Derby was a transparent and calculated gamble, and it has backfired. Back in the spring, Churchill plainly hoped to have those turnstiles rotating by now. Their statements at the time had little of the honesty and dignity of the one released on Thursday. Instead oily verbiage seemed to ooze off the page to coalesce on the floor in giant bald letters, spelling two words that had not appeared anywhere in the text: GATE MONEY.

Their unilateral decision forced other tracks into terribly awkward contortions. As a result, whatever he does in his “Classics”, Tiz The Law (Constitution) can never match all those who, as less-mature 3-year-olds, completed a five-week Triple Crown over 12 furlongs. As a first test of our ability to see out the crisis by working together, in the long-term interests of the whole sport, it was a pretty dispiriting start. For the integrity of the record, the venue should have been changed before the date. In the war, remember, the Epsom Derby was staged at Newmarket.

In the meantime, of course, horses like Charlatan (Speightstown) and Nadal (Blame) have been denied the opportunity that would have beckoned in May. But that’s sheer dice: whatever the date, some top sophomores are going to run out of luck at the wrong moment. Art Collector (Bernardini) jumped onto the September trail only to derail, heartbreakingly, at the 11th hour.

To that extent, Tiz The Law would deserve all possible exoneration if bearing the weight of an asterisk in the Derby annals. He has been the one constant of the crop. He was ready, willing and able in May; and here he is in September, still setting the standard. Tagg has done a masterly job already, the horse’s flame burning ever brighter even though ignited as early as February 1 in the GIII Holy Bull S.

Even so, I haven’t by any means given up on Honor A.P. (Honor Code). We don’t have quite the coast-to-coast match-up that he promised in the GI Runhappy Santa Anita Derby, but this stampede should bring that prodigious stride into play rather more efficiently than did that messy little rehearsal. His works since have been spectacular, and to see it all come together now would not only carve an apt memorial to his grandsire; it would also shine a light on the self-effacing man of honor who trains him. It’s been an unconventional preparation, for sure, but then the rulebook doesn’t really apply to this unprecedented Derby.

Divided and distanced, then, we turn to the horse to bring us together. Perhaps if enough people can admire the beauty and spirit of the Thoroughbred, and aspire to its courage and endurance, then a Derby that has absorbed so much bitterness could yet process it into some kind of healing balm.