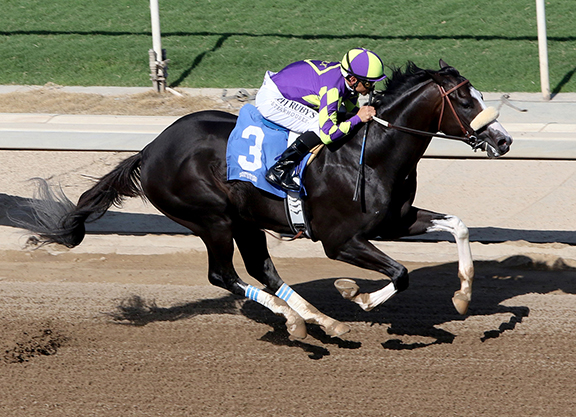 The GI Santa Anita Derby winner, Honor A. P. (Honor Code–Hollywood Story, by Wild Rush) has been retired following a fourth-place finish in the GI Kentucky Derby during which he suffered an injury, according to trainer John Shirreffs. He is scheduled to arrive at Lane’s End Farm Tuesday afternoon to take up stud duties.

The 3-year-old colt retires as the top earner of his leading second-crop sire Honor Code.

In his most recent start, Honor A. P. dealt with an unlucky trip to finish a closing fourth in the Kentucky Derby, posting a 99 Beyer and traveling the furthest distance of all the horses in the field, according to data from Trakus.

“Honor A. P. is a horse with an immense talent,” said Shirreffs. “He was so forward and precocious that he broke his maiden second time out by over five lengths going two turns. Honor A. P. showed brilliance as a 2-year-old from the first time I saw him train and replicated it as a 3-year-old defeating the future Kentucky Derby winner. He ran a super race in the Derby and we later found that he came out of the race with an injury, so all things considered, what he accomplished was something special.”

As a 2-year-old, Honor A. P. broke his maiden at Santa Anita by over five lengths posting a 91 Beyer, one of the highest of his generation. His first start as a 3-year-old was in graded stakes company when he finished second in the GII San Felipe S. In his next start, he won the GI Santa Anita Derby, posting a 102 Beyer and becoming the only horse to defeat subsequent Kentucky Derby winner Authentic (Into Mischief) while also defeating GII Pat Day Mile S. winner Rushie (Liam’s Map). In his next start, the Shared Belief S., he posted another 102 Beyer making him one of four 3-year-old colts in 2020 to post multiple triple-digit Beyers beyond a mile.

“Honor A. P. was a ‘wow’ horse from the beginning. He was the highest priced yearling in Honor Code’s first crop. He was a standout 2-year-old at April Mayberry’s, and the most recognizable horse in training at Santa Anita,” said Lane’s End’s Bill Farish. “His stunning good looks paired with his obvious talent make him just the type of prospect we are looking for at Lane’s End.”

Honor A. P. is out of the multiple Grade I winner Hollywood Story, who earned $1,171,105 in her career, and he is a half-sibling to three black-type winners. Hollywood Story is by Wild Rush, making Honor A. P.’s pedigree free of Mr. Prospector on his dam’s side to five generations. His sire Honor Code is one of just four second-crop sires including Liam’s Map and Constitution to produce a Grade I winner in 2020. To date, Honor A. P. is Honor Code’s highest-priced yearling, earning a final bid of $850,000 from David Ingordo for Lee and Susan Searing’s CRK Stable at the 2018 Fasig-Tipton Saratoga Sale.

“Like any owner in this game, Susan and I have long dreamt about having a leading Derby contender,” said Lee Searing. “Honor A. P. has given us the journey of a lifetime and we are excited to stay involved in his next career as a stallion where we know he’ll be in great hands at Lane’s End.”

Honor A. P. will be available for inspection at Lane’s End farm in the coming weeks and a stud fee will be determined.