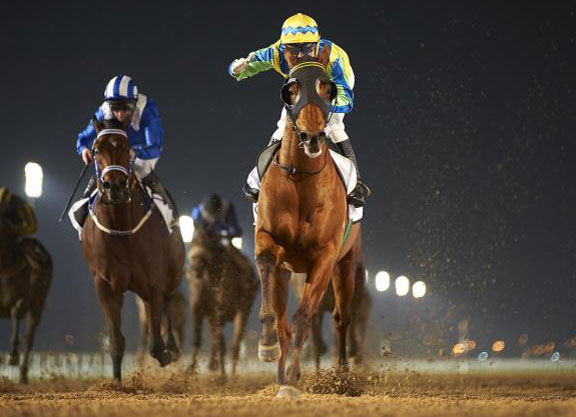 Rich Tapestry returned to the dirt–the surface over which he is a Grade I winner–to win Thursday's Al Shindagha Sprint and advertise his claims to another top-level dirt contest, the G1 Dubai Golden Shaheen, over this track and trip Mar. 26. The winner of the course and distance G3 Mahab Al Shimaal over the Tapeta here in 2014, Rich Tapestry finished second to Sterling City (Aus) (Nadeem {Aus}) in that year's renewal of the Golden Shaheen three weeks later. Given the summer off after finishing eighth in Sha Tin's Listed Sprint Cup on the grass a month later, Rich Tapestry shipped stateside to nose out Goldencents (Into Mischief) in the GI Santa Anita Sprint Championship, but trailed in last of 14 in the GI Breeders' Cup Sprint three weeks later after bleeding in the race. Rich Tapestry bounced back to put in another admirable Golden Shaheen performance when third behind Secret Circle (Eddington) off a near four-month layoff last year, but was off the board in his other three tries of the year, all in Group 1 turf events: Sinagpore's KrisFlyer Sprint, Japan's Sprinters S. and the Longines Hong Kong Sprint. While Rich Tapestry broke sharply from gate nine yesterday, that was not the case for race favorite Marking (Bernardini), who went to his knees at the start, throwing jockey James Doyle. Meanwhile, Rich Tapestry and jockey Gerald Mosse were able to clear the field and cross over to set the pace on the fence down the backstretch. Rich Tapestry turned into the straight a length in front with Muarrab and defending winner Reynaldothewizard coming to tackle him out wide, but the winner had enough in the tank to hold that formidable pair comfortably at bay. Mosse, who was winning in Dubai for the first time, attributed the gelding's strong performance to his return to the dirt. “He loved the surface, he loved the dirt,” the Frenchman said. “He has natural gate speed and he played with everybody all the way around. I didn't use everything; I thought I'd keep something for the big day.”

That big day will be a return date to the Golden Shaheen, but trainer Michael Chang said the bay could reappear in the Mahab Al Shimaal on Super Saturday first. “He loves Dubai, he loves the dirt,” Chang said. “The last two years he missed the chance for the big one. I hope we can do it this season. It's better for him to stay in Dubai longer, rather than sending him down for just the one race, the Golden Shaheen. I may run him on Super Saturday as well.”