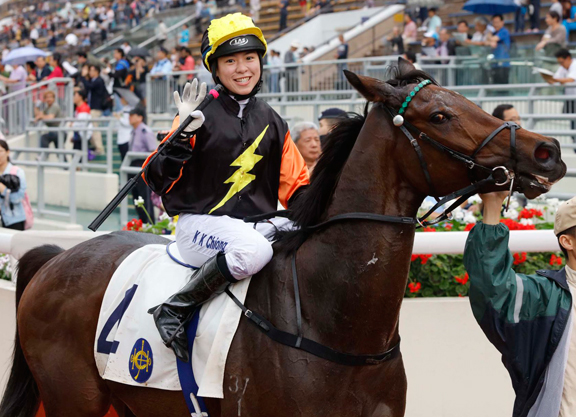 The 2015/2016 racing calendar concluded some three weekends ago, but a handful of Hong Kong-based (and -born) jockeys are keeping busy with overseas engagements before heading back for the start of the new season in early September.

Matthew Chadwick, perhaps best known for his successful partnership with the Tony Cruz-trained California Memory (Highest Honor {Fr}), is on a short-term licence in Singapore through Aug. 21 and had four rides on the Friday night program at Kranji Racecourse. While he failed to break through with a win, he rode with credit, guiding 12-1 shot Exciting Prospect (Aus) (Distorted Humor) to a runner-up effort in a Class 5 handicap over the Polytrack in the day's opening event and followed up with a third-place finish atop 14-1 Great Warrior (Ire) (Kodiac {GB}) in the restricted maiden at six furlongs on the all-weather. Chadwick is named on five horses Sunday afternoon at Kranji.

Apprentice Kei Chiong, just 23, took Hong Kong by storm in 2015/2016, her 37 victories from 319 rides (11.6%) good for sixth place behind Joao Moreira in the jockeys' premiership, one win better than former champion Douglas Whyte. She also outpointed the “Magic Man” to be named Hong Kong's most popular jockey. Chiong, who became an apprentice in 2012 and rode 44 winners in New Zealand for trainers Graham Richardson and Allan Sharrock, will spend four weeks in Adelaide with top Morphettville trainer Phillip Stokes and has five mounts on Saturday's program at Morphettville Parks. Three of those are for Stokes, including the ride on favored Pomp (Aus) (Street Sense) in the day's third, the A$40,000 Schweppes H. over 1200 metres. Chiong has also accepted two calls from trainer John Hickmott.

Fellow apprentice Jacky Wong put together a respectable 22-win season in Hong Kong in 2015/2016, he too having begun his career in New Zealand with trainer John Sargent. Wong is spending his off-season with Sargent and will ride for the first time in Australia this Sunday when he partners Elusive Runner (Aus) (Encosta de Lago {Aus}) in a BM70 handicap that goes as the seventh race at Hawkesbury.

“He should be very hard to beat and should kick Jack off on a good note,” Sargent told racenet.com.au.