Homebreds Are Dominant On This Year's Derby Trail 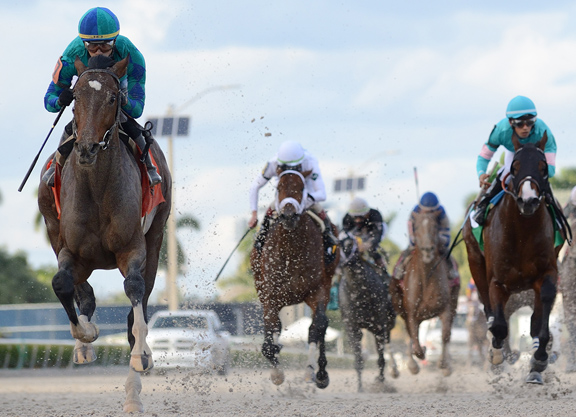 In a departure from recent seasons, homebreds are dominating the GI Kentucky Derby trail through the early portion of the 2021 prep-race season.

In the TDN Derby Top 12 that will be published in the Feb. 2 edition, no fewer than seven of the leading dozen race for the same owners who planned their matings, raised them as foals, and got those colts into the starting gate.

That 7-of-12 ratio is as high a number of homebreds within the Top 12 at any time since I started compiling TDN's Derby rankings back in 2017.

For short-term comparison, using the Top 12 lists that were published the first week of February in each of the last two years, just two homebreds were among the highest-ranked dozen at this point of the 2019 campaign. In 2020, only one homebred made the early-February cut.

'TDN Rising Star' Caddo River (Hard Spun) is a Shortleaf Stable homebred who is shaping up as the hometown horse to beat in the Arkansas preps. And the colt who finished right behind him in two New York maiden races last fall, the Courtlandt Farms homebred Greatest Honour (Tapit), just muscled his way into Derby relevance at Gulfstream with a 5 3/4-length smash-and-grab score in Saturday's GIII Holy Bull S.

Derby aspirant and 'TDN Rising Star' Mandaloun (Into Mischief) is a Juddmonte homebred, and Highly Motivated (Into Mischief) carries the colors of owner/breeder Klaravich Stables (after going through the auction ring for $240,000 at KEENOV because Klaravich was buying out a partner who co-owned the weanling).

It's tempting to wonder if the early-season prominence of homebreds on the Derby trail is in any way related to the phase-out of Lasix over the past six months and/or how those horses have been managed and trained.

The country's top circuits began prohibiting race-day usage of the drug for 2-year-olds in 2020, as did the Breeders' Cup for its quartet of juvenile stakes. The 2021 Derby will be run Lasix-free, as will most of the “Road to the Derby” stakes preps leading up to it (in exceptions like December's Springboard Mile S. at Remington Park, no qualifying points were awarded to the first-, third, and fourth-place horses because they raced on Lasix).

Over the past decade, Thoroughbred breeders who race their own stock have been among the most vocal proponents of eliminating race-day medication in America. Is there something about how they've raised their horses that is allowing them to reap the rewards of a rollback to Lasix-free racing at the highest levels of the sport?

It's far too early to tell for sure. Right now the data sample is not large enough to distinguish causality from coincidence when it comes to linking the success of homebreds to the decline of Lasix usage.

And in two of the cases of the above-mentioned seven homebreds, that Lasix theory doesn't hold water (forced pun intended): Proxy and Prevalence both have only won while racing on Lasix (the former where it was permitted for 2-year-olds at Fair Grounds last autumn and the latter Jan. 23 at Gulfstream, where Lasix is allowable in non-stakes for 3-year-olds). If they are to continue as serious Derby candidates, they'll have to forego it.

But you can bet potential links to medication-free racing will be worthy of further exploration if elite-level homebreds continue to cluster at the top of the crop.

This past Saturday, two horses named after filmmaking kingpins ran in Derby prep races–Tarantino (Pioneerof the Nile) was second in the Holy Bull S., and Spielberg (Union Rags) ran fourth in the GIII Lewis S.

But the more intriguing mashup between cinema and horse racing occurred on Sunday, when the independent, small-budget film “Jockey” overcame long odds to premiere at the world-renowned Sundance Film Festival in the category of U.S. Dramatic Competition.

“Jockey” was shot at Turf Paradise in 2019, using live race action and the backdrop of a working stable area to augment the scripted parts of the film. Texas-based director and co-writer Clint Bentley is the son of the late Quarter Horse jockey Robert Glenn Bentley, who rode primarily in the Southwest and also at Pompano Park in the early 1980s when the Florida harness track used to host Quarter Horse meets.

Although the debut screening of “Jockey” occurred too late on Sunday evening to allow for a review prior to deadline for this column, advance press material describes the plot as revolving around an aging jockey (Clifton Collins Jr.) trying to go out as a winner despite a litany of injuries that have compromised his health. His spirits get a boost when he gets a leg up on a promising young horse, but when a budding young rider (Moises Arias) arrives on the circuit and claims to be his son, the journeyman jock is forced to confront whether his last gasp at achieving on-track success is more important than his longing for the family connections he gave up to pursue his race-riding dreams.

The buzz prior to Sunday's world premiere was strong enough that “Jockey” was acquired last week by the Berlin-based Films Boutique for international sales, according to the show-biz trade publication Variety.

Because of the COVID-19 pandemic, the Sundance festival this year is taking place in an online-only format. One additional screening of “Jockey” is scheduled Feb. 2, and (as of this writing) limited-availability tickets are still available for $15 at Sundance.org.

Prior to the 99-minute feature “Jockey,” Bentley created a precursor short film in 2017 that was similarly inspired by his father and the hardscrabble existence of jockeys riding on low-level circuits. That 10-minute short, titled “9 Races,” was shot at Retama Park. You can view it online for free here.