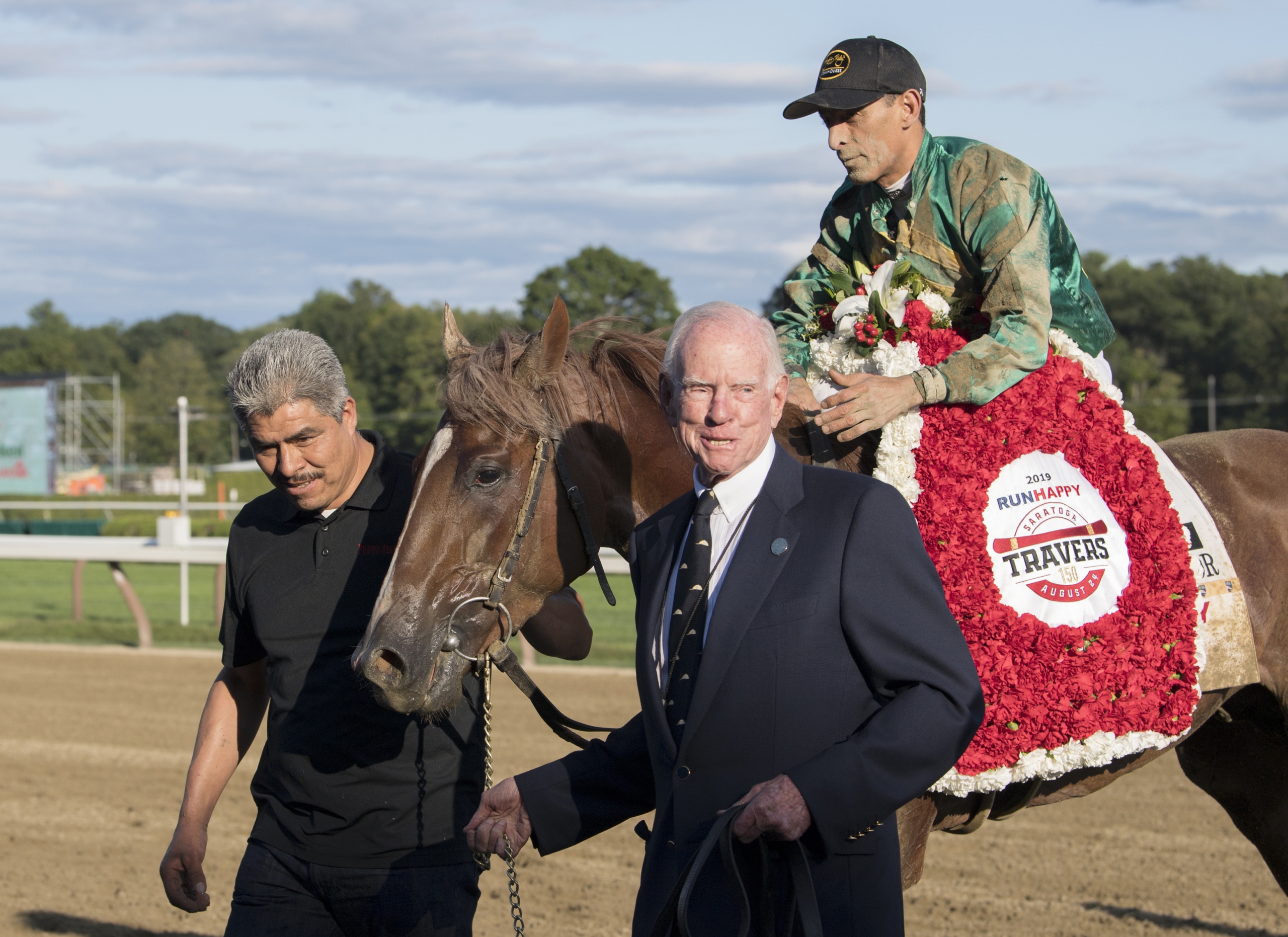 Code of Honor (Noble Mission {GB} – Reunited, by Dixie Union) arrived at Lane's End Farm, where he will stand the 2022 season, early in the morning hours of Tuesday, Dec. 7. The multiple Grade I winner was bred and raced by W.S. Farish and earned nearly $3 million over his four-year career.

“It's a really fun day for all of us at Lane's End,” Bill Farish said after watching the homebred take in his new surroundings at the Lane's End stud barn. “Code of Honor coming home is something we've been waiting on for a long time, so it's very exciting to get him here and we're really looking forward to starting his breeding career.”

Bought back by Lane's End at the 2017 Keeneland September Sale, Code of Honor was soon sent to trainer Shug McGaughey. The chestnut broke his maiden on debut as a juvenile at Saratoga and ran second in the GI Champagne S. after stumbling at the start.

As a sophomore, the colt won the GII Fountain of Youth S. before finishing third in the GI Florida Derby and second in the GI Kentucky Derby. He then rolled off consecutive victories in the GIII Dwyer S., GI Runhappy Travers S. and GI Jockey Club Gold Cup S.

The Travers win, Farish said, marked an unforgettable day for the Farish family.

“It was a real high point for us,” he explained. “It's hard to put into words. It's something that Dad has been trying to do for a long time and we have been second twice, so it was a big, big day for us. It's really what it is all about for us. It's very rewarding to go to the sales and pick out a Grade I winner, but to breed one is a whole other thing.”

As an older horse, Code of Honor captured graded victories in the GIII Westchester S. at four and the GIII Philip H. Iselin S. at five. He also hit the board in the GI Runhappy Metropolitan H., GII Kelso H., GI Clark S. and GII Hagyard Fayette S.

The six-time graded stakes winner is from the first crop of Noble Mission and is out of the W.S Farish-bred and owned Reunited, winner of the 2005 GIII Thoroughbred Club of America S. Farish said he is confident that the versatility in Code of Honor's pedigree will be reflected in the individuals he will soon produce.

“I wouldn't be surprised at all if he was able to get both dirt and turf horses with his pedigree,” he noted. “He has a lot of speed on the bottom side and he has stamina on the top. He's a really well-made horse with a tremendously-efficient stride and he's a real throwback-type horse.”

“We're going to be supporting him very heavily,” Farish said. “We're going to put everything we can into getting him a really good first crop and we've priced him to where we think he's unbelievably attractive for a horse with his credentials. We just can't wait to get going.