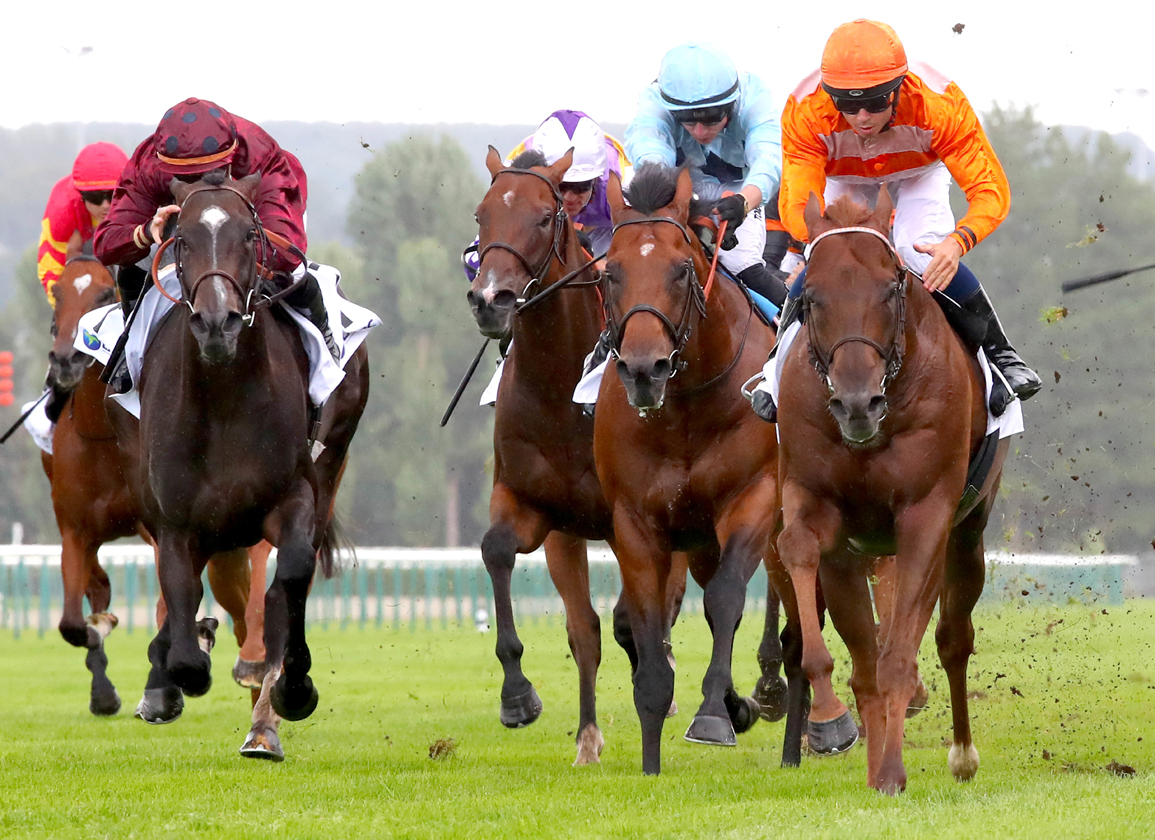 There were just three of the dozen to contest Sunday's G1 LARC Prix Maurice de Gheest at Deauville trained in France, but despite extremely tough foreign opposition the home team managed a surprise one-two led by Marianafoot (Fr) (Footstepsinthesand {GB}). Prolific at a lower level of late, Jean-Claude Seroul's 6-year-old had captured the seven-furlong G3 Prix du Palais-Royal and G3 Prix de la Porte Maillot on ParisLongchamp's turning track May 30 and July 1 but was equally at home over the straight course here with Mickael Barzalona burying his mount in the stand's-side group early. Tacking on to the heels of the G1 July Cup hero Starman (GB) (Dutch Art {GB}) inside the final two furlongs, the 9-1 shot sliced his way through a gap to swamp that 9-5 favourite passing the furlong pole. Readily asserting from there, the chestnut who was extending the amazing run of his owner-breeder and trainer Jerome Reynier in 2021 following the success of their Skalleti (Fr) (Kendargent {Fr}) had 1 3/4 lengths to spare over compatriot Tropbeau (GB) (Showcasing {GB}) at the finish. That 92-1 shot was the shock of the race as she denied Starman by a nose for the silver medal. “We've been targeting this for a while and in all his races beforehand we had in mind that they were preps for this,” Reynier explained. “We know he stays seven easily and I think he'll go a mile, so we had it in mind to make the running and turn it into a stamina test if need be. It was just a matter of getting an opening and he settled it within a matter of strides.”

With France winless in the six preceding domestic group 1 races, Marianafoot looked to have a tall order to stop that trend especially with such a potent international threat including the title holders of the July Cup, G1 Prix Jean Prat, G1 Commonwealth Cup, G1 Qipco British Champions Sprint S. and G1 Vincent O'Brien National S. Even allowing for his relentless progress since December, where he began his winning sequence in a conditions event over this trip on this venue's Polytrack, the idea of him upstaging such a stellar cast was in part fanciful and few would have predicted that the finish would involve a duo who were yet to figure at this level. Tried over a straight track on his fourth start this year in Chantilly's Listed Prix Servanne over six furlongs Apr. 26, he proved that held no fears before twice inflicting defeats on Duhail (Ire) (Lope de Vega {Ire}) at ParisLongchamp. After that rival had run such a fine race to be on the premises in the G1 Sussex S. last week, the portents were strong that he would at least be there at the business end and he was drawn favourably low which would aid his cause.

With the other 9-5 joint market-leader Campanelle (Ire) (Kodiac {GB}) proving difficult behind the stalls and fly-leaping and nearly unshipping Frankie Dettori exiting the stalls, she could almost be ruled out of contention even before she took too hard a grip racing far side. In a fascinating tactical affair, Maxime Guyon opted to pursue the Stonestreet sensation on Thunder Moon (Ire) (Zoffany {Ire}) as they raced in isolation with Hollie Doyle adopting her usual front-running ploy on Glen Shiel (GB) (Pivotal {GB}) up the centre and it may be no coincidence that this trio eventually filled the last three places. Following Glen Shiel was the G2 Lennox S. winner Kinross (GB) (Kingman {GB}) and Tropbeau, while stand's side the third of the French runners Ocean (Fr) (Exosphere {Aus}) led the Jean Prat hero Laws of Indices (Ire) (Power {GB}) and Starman with the winner tucked in behind. Starman had forged ahead with 300 metres remaining, but Marianafoot was really picking up in his shadow and as that rival found extra the July Cup winner faded close home to lose second to Tropbeau who emerges with great credit.

“When I ran him over six furlongs at Chantilly, I considered it a test over a straight course and although the owner wasn't too keen to run I told him we needed to teach him something,” Reynier said. “That proved to be the right move, as since then he has been perfect. He is now a group 1 winner and a stallion prospect. We'll keep him in Deauville and keep him fresh to see if we go for the [G1 Prix Jacques le] Marois next week. I know Palace Pier is coming and he'll be a tough nut to crack, but if he's doing well we might well take our chance. Later, the obvious target is the [Oct. 3 G1 Prix de la] Foret [at ParisLongchamp] if the ground hasn't turned too soft by then. If we are lucky, we might finish in the Breeders' Cup Mile.”

Stephane Pasquier said of Tropbeau, “The filly showed very good acceleration to pip Starman and take second. It's all very satisfying.” Starman's owner David Ward commented, “Starman was beaten by the ground. We will have to travel outside Europe at some point to find ground that suits him. He still ran well, despite the conditions not being to his liking. The jockey confirmed our impression. On good ground, he's a different horse.”