Hollie Doyle and Sherbet Lemon Team Up For Oaks 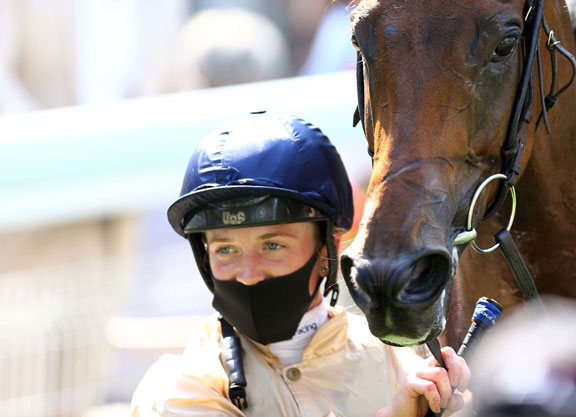 “She's very well, and we're really looking forward to next Friday,” said former NH jockey Robert 'Choc' Thornton, who manages the Apple Tree racing and stud operation for Paul Dunkley. “She's done some work–she did a gallop on Friday and she's absolutely fine. It's just a case of keeping her ticking over for the big day.”

Doyle was aboard for the filly's maiden win in February, but was not in the irons for her next two runs, as she had commitments to owner Imad Al Sagar. Sherbet Lemon was fourth with Tom Marquand in the saddle at Wetherby in a novice on Apr. 25 and returned on May 8 to with the Listed Novibet Oaks Trial Fillies' S. at a big price under Paul Mulrennan.

“She stays and she seems quite versatile,” he said. “She won on the all-weather at Newcastle, and it was quick ground at Wetherby when she was fourth. She got no run at all, and I was actually very pleased with the way she ran that day–because she stayed on really well, and we know there were traffic problems.

“Then at the Oaks trial, the listed race at Lingfield, she was fantastic. She travelled on soft ground, and Lingfield is undulating and possibly as close as you can get to Epsom away from Epsom.”

“We'd hope we have a good each-way chance–if she could finish fourth or fifth then she'd have run very well,” he said. “My only slight concern is the possibility that we haven't got the tactical speed early–in Group 1s they go a good gallop.

“We wouldn't want her in top gear all the way, so we may have to sit and suffer at some stage early on just to find her rhythm and find her gear, and then she should be staying on at the end.”