Hogan, a Pioneer for Women in Equine Surgery 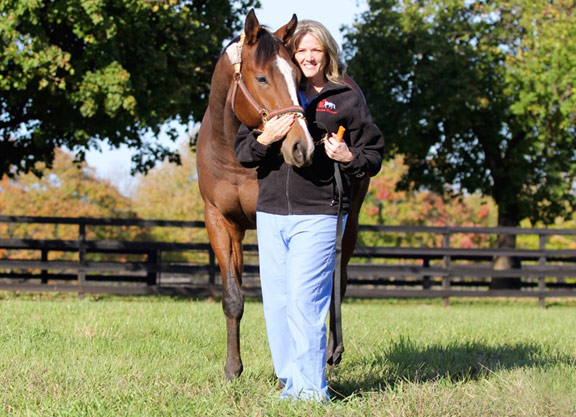 At the start of her career, Dr. Patty Hogan, who is now one of the leading equine orthopedic surgeons in the country, was often confused for a nurse or secretary. Some clients who knew her as Pat Hogan even assumed that she was a male vet until they came to pick up their horse because a female orthopedic surgeon was basically unheard of in the racing industry in the early 2000s.

“I can remember this funny situation. Dr. Jim Hunt from Belmont was one of the first veterinarians to start sending me some cases,” Hogan recalled while sitting in her office at her New Jersey-based clinic, Hogan Equine. “He sent me a condylar fracture that was one of Todd Pletcher's, so I called Jim to tell him how it went. I tell him and he goes, 'Okay, thanks for telling me, but can I talk to Dr. Hogan now?' He thought I was just the secretary calling. It was just unheard of that women were in orthopedics and doing racetrack practice, so it took a while for people to accept that.”

Pletcher, now a seven-time Eclipse winner, is one of Hogan's longest-standing clients. She also has done work for Jimmy Jerkens, Rick Violette, Linda Rice and Mike Hushion, as well as many top trainers and owners in the harness racing industry.

“The first 10 years, there were some people that were so consistent,” Hogan remarked. “Todd is great. He always sends me very, very difficult cases. I kid him about it like, 'Can't you just send me an ankle chip.' But, we have done well together. Jim Jerkens was one of my first clients. I operated on his first horse that he won with, named Ninth Inning. People like that I really appreciate and still work for today. It means a lot to me to have those relationships.”

Creating and building those relationships did not come easy for Hogan, however. The lifelong New Jersey resident had her work cut out for her when she started her journey into veterinary medicine and broke down a lot of barriers to get where she is today.

“It took me a while to figure out not that I wanted to be a vet, but that I could do it,” the University of Delaware alumna said. “It was so competitive and I was so average with my grades. I learned best by doing. I didn't get in the first year I applied to vet school and I was crushed. I decided I'll go out there and see if I could get a job.”

Hogan literally did just that, marching into the University of Pennsylvania Vet School's New Bolton Center where she took a job cleaning stalls and the rest, as they say, is history.

“I walked in there and they thought I was somebody else showing up for a stall cleaning job, so I played along,” Hogan recalled. “I said, 'I really want to get into vet school, but I'll clean stalls!' I stuck with it all summer and even drove the forklift at night. It just got me in the door and got me to meet people.”

Just three months into that job, Hogan met a person who would change her life, Dr. Tom Divers. Divers gave the eager horse lover a job as a technician working on a project for bovine leukemia virus. That job, and a residency change to Pennsylvania, got Hogan into Penn the following year.

Upon completing her degree at Penn, Hogan did a surgery residency at Texas A&M, where she got a big reality check.

“They were basically forced to take me because I was a woman and they had gotten a little bit of heat from their superiors because all their residents were men, so that was one thing against me,” Hogan remarked. “Also, I was from the East Coast and the first day I walked in there they said, 'So, you're the Yankee.' It just went from there.”

Though the residency was tough in many ways, it helped shape Hogan into the vet she is today and prepare her for the challenges she would later face on the job.

“I really learned a tremendous amount about surgery and how to be innovative, but, frankly, it also made me tough to know how to handle the racetrack environment,” Hogan explained. “Let's face it, when I started there were no women doing racetrack surgery at all. There are still very, very few. There was a lot of discrimination in Texas, which was just kind of natural, but it was an eye opener for me being from the East Coast, which is so open. But, when I came back to be a racetrack surgeon I was tougher about it when people said, 'I'm not sending my horse to a woman,' which did happen many times.”

Hogan returned home to the Garden State to begin her career working for Dr. Scott Palmer at the New Jersey Equine Clinic. With the help of Hunt, who referred Pletcher her way, Hogan slowly, but steadily began to build up a reputation and client base.

However in 2004, about seven years after joining Palmer's clinic, a then unknown 2-year-old Thoroughbred, who came in for an emergency eye removal after a starting gate accident, would take Hogan's career to a new level. That rambunctious colt, who was still unraced at the time, was GI Kentucky Derby and GI Preakness S. winner Smarty Jones (Elusive Quality).

“He was trying to get his gate card and had reared up and smashed his head in the gate,” Hogan recalled of the horse she jokingly referred to as Quasimodo during his recovery. “They called me up the next day and said they were bringing me an emergency eye removal that looked terrible. I go to greet the van and I hear this clip clop, clip clop. He came trotting in and his head was massive. It sure looked like he needed his eye removed, but I did my own X-rays and ultra sound, which showed that deep inside the eyeball was still intact and had not ruptured. The swelling was all the tissue around his eye and he had several sinus fractures.”

Not only did Hogan not remove the eye, she did not perform surgery at all. The Cream Ridge resident treated the chestnut with steroid injections, kept his face wrapped and checked on him diligently. He made a full recovery and his eyesight was completely unaffected.

“I can remember every hair on that horse's body because he was so memorable. He had the greatest tough guy personality,” Hogan recounted with a fond smile. “A few weeks after he left, [trainer] John Servis contacted me and said, 'You know that horse that you fixed the eye on? He's pretty good.' He started to win and win, and I remember John called me one day and said, 'I just wanted to tell you I am about to change your life.' Sure enough, he did. We had so many people come to do interviews, ESPN, The New York Times, everybody came.”

Hogan's client list began to grow and grow and in 2007, after spending a year helping to plan, build and launch the Ruffian Clinic in New York, she started her own clinic at New Jersey's Fair Winds Farm, a Standardbred breeding operation across the street from her house. Hogan's practice is about 50% Thoroughbreds and 50% Standardbreds, which gives her the opportunity to see just about every type of orthopedic injury.

“Fair Winds is a client I had for all of my career and they just had space not being used, so it was great,” said Hogan, who grew up working in the harness racing industry and is married to Standardbred trainer Eddie Lohmeyer. “This was their old stud barn. We converted it and we have about 55 stalls and the paddocks. It's good for them too because they have horses filling their stalls that they normally wouldn't have.”

With 17 racetracks, both Standardbred and Thoroughbred, within a two-hour drive of the clinic, Hogan's clients come from all over the Midlantic area and all walks of racetrack life, from claimers to champions. In addition to champion Smarty Jones, she has worked on Eclipse winner La Verdad (Yes It's True); GISW Take Charge Indy (A.P. Indy); MGISWs Palace (City Zip) and Sweet Reason (Street Sense); Hambletonian winner Trixton; and top Standardbred Always B Miki, who recently shattered the world record for fastest mile ever by a pacer.

“There is nothing more gratifying than having a horse come in the door that is stressed and in a lot of pain, fixing whatever the problem is and watching them walk out happy and using the leg,” Hogan remarked. “That's the best part about surgery. It's almost instant.”

Hogan's care doesn't just stop when the horse leaves her clinic. She continues to follow each of her patients throughout their careers.

“I keep track of all of them. I put the names in the DRF database so I get an alert if they are working, and if they are not working well I call and ask if there is a problem,” Hogan explained. “I called last week on a $5,000 claimer that had a really hard slab fracture. The horse won and the trainer was ecstatic. That's one thing I love about my job. I'm not just here to do the surgery part. I like the whole package, the relationships with the clients and to see how the horse is doing.”

“Surgery averages around $3,000, which is a big chunk of money for a group raising $5 here and $10 there, so I made a decision that I was going to do the surgeries for free,” Hogan commented. “It was nothing to do with the organizations themselves, it was just kind of a pact I had with the horse because my whole life I had this wonderful career based on horses and it was a way to give them a chance.”