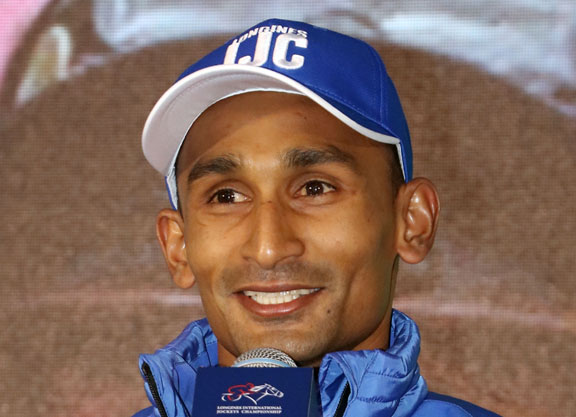 Eight world-class riders from outside of Hong Kong and four from the home team will battle it out for the HK$500,000 first prize for IJC, which takes place over the course of races four, five, seven and eight at the city circuit. Points are awarded to the first three finishers in each race–12 for first, six points for second and four points for third.

Last year's top three face a rematch Wednesday evening, led by Silvestre de Sousa, who thrashed the competition last year with a record point total of 34, easily outdistancing Ireland's Colin Keane and Vincent Ho, who earned his way into the IJC by virtue of his leading the 'homegrown' jockeys by number of victories as of two weeks ago.

“I do look forward to it,” the Brazilian, who has racked up 24 wins around the tight track, told the Hong Kong Jockey Club's David Morgan. “It's a night when you need a lot of luck, so you need luck with the draw and the horses you ride. I go around there and I know what I'm doing, I know what speed I'm going and I go out there with plenty of confidence that if the horse is good enough he'll deliver for me. I believe it's very important for a jockey to ride full of confidence,” he said.

“It is such a big event and, while unfortunately I wasn't in it last year, in the years before you have to go back some way to when I won it,” said Moreira, who was runner-up in 2014. “It's a pleasure to be back in it against all these top jockeys and my rides don't seem too bad. Some of them may have a bit of a chance and hopefully we'll get some good gates and take it from there.”

Moreira was riding full time in Japan 12 months back.

New Zealand-born James McDonald is back in top form and represents Australia, while Japan's Yuga Kawada looks to add the IJC to his victory in the World All-Star Jockey's competition over the summer at Sapporo.

Third at Sapporo was Mauritian Karis Teetan, who sits third in the jockeys' premiership and who won his first feature at the HKIR when guiding Mr Stunning (Aus) (Exceed and Excel {Aus}) to victory in last year's G1 Hong Kong Sprint. Teetan has drawn an outstanding book of rides and looks the one to beat on paper Wednesday evening.

“I can say it's nice to go into the competition with some chance,” he said. “I think I learned a lot from my two previous IJC appearances and it's great to ride here in Hong Kong and get the opportunity to go again in the IJC.”

Reigning British champion Oisin Murphy arrives in Hong Kong in fine form, having recently taken the G1 Japan Cup with Suave Richard (Jpn) (Heart's Cry {Jpn}). France's Pierre-Charles Boudot also has a major Group 1 success under his belt in recent months, as he guided Waldgeist (Ger) (Galileo {Ire}) to take down the colors of none other than Enable (GB) (Nathaniel {Ire}) in the G1 Prix de l'Arc de Triomphe in early October. Boudot was third to Purton in the 2017 IJC.

Racing kicks off Wednesday evening at 6.30pm local time, with the first of the four IJC races set to jump at 8.10pm.