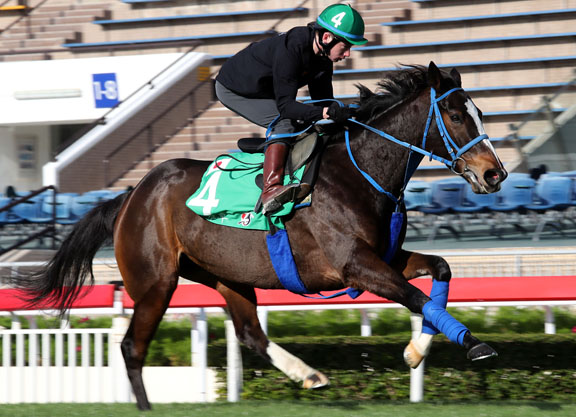 HONG KONG — It was another morning of chamber-of-commerce weather Wednesday morning at Sha Tin, a bit of a chill in the air, but gloriously clear and sunny as many of the Japanese runners slated for action in Sunday's Longines Hong Kong International Races were given turf hit-outs down the straight.

Deirdre (Jpn) (Harbinger {GB}), runner-up in last year's G1 Longines Hong Kong Cup, will be having her eighth run of the season when stretching back out 2400 metres in Sunday's G1 Longines Hong Kong Vase. The 5-year-old, who belied odds of 20-1 in Goodwood's G1 Nassau S. in August, was extending nicely in the final stages with Oisin Murphy at the controls, working home her final two furlongs in :22.5.

Indy Champ (Jpn), a son of 2001 Hong Kong Vase hero Stay Gold (Jpn), tries to complete a hat trick of Group 1 wins in the G1 Longines Hong Kong Mile and flashed home his final 400m in :22.6. “He was a bit distracted by the grandstand this morning but once we got him focused, he moved well. He is in good condition,” said assistant trainer Kenichi Shono. The 4-year-old is campaigned by the same syndicate as Almond Eye (Jpn) (Lord Kanaloa {Jpn}).

Persian Knight (Jpn) (Harbinger {GB}) was done no favours by the 14 hole last year and remains one of the more imposing physicals. Big and strong, the rich dark bay will try to make amends for his fifth in last year's G1 Longines Hong Kong Mile with Murphy to ride and moved well over the all-weather track. He gallops on the turf Thursday.

Lucky Lilac (Jpn) (Orfevre {Jpn}) becomes her sire's first Hong Kong runner when she takes in the Vase and the elegant chestnut stretched out well in her gallop Wednesday morning (home her final 400m in :21.5), as did Win Bright (Jpn) (Stay Gold {Jpn}), who was nicely on his toes before working well, then finished up 800m of work in :22 flat. Normcore (Jpn) (Harbinger {GB}) also caught the eye, covering her final quarter-mile in :21.3.

The bulk of the activity took place on the dirt Wednesday morning. Prince of Arran (GB) (Shirocco {Ger}) continues to make a favourable impression whether on turf or dirt and he looms a solid each-way chance in the Vase. The Ballydoyle threesome of Mount Everest (Ire) (Galileo {Ire}), G1 Investec Derby hero Anthony Van Dyck (Ire) (Galileo {Ire}) and G1 Mackinnon S. victress Magic Wand (Ire) (Galileo {Ire}) galloped as a team Wednesday morning, each looking well. The latter appears to maintain her form despite a long season which has seen her race in America (three times), Dubai, England, Ireland and Australia. But seeing her in the flesh, it is really no surprise that she has held up to such a vigourous schedule, as she is stoutly built and is showing no signs of being over the top. The trio heads to the turf Thursday morning.

Edisa (Kitten's Joy) is the one American-bred horse in the four international events and she looked to be handling the dirt track as well as anything Wednesday morning.