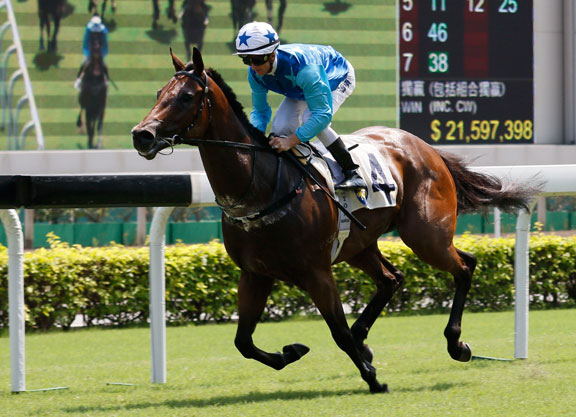 There were a few nervous moments pre-start, as the 1.5 (1-2) favorite sat back in the gate and was unloaded before stepping back into line. Jing Jing Win bounced away neatly from gate five and raced with the early pace while inside to the turn. Guided out into the two path on the bend, Jing Jing Win looked to have the race at his mercy at the head of the lane, responded immediately when roused by Zac Purton a furlong and a half from the wire and was unextended in the last 50 metres. Final time for the 1200 metres was a strong 1:09.51 (VIDEO).

“He'll probably come on a lot for that race: he's never been opened up before,” commented winning trainer David Hall. “He was a bit lost when he had to go and run away from the field; he didn't know how to do it because it was the first time he'd had to do that sort of thing. That might wake him up and he might be a hell of a lot sharper next time.”

A full-brother to GSW Havana (Aus), Jing Jing Win was an A$360,000 purchase by the Hong Kong Jockey Club from the draft of Arrowfield Stud, agent, at the 2014 Inglis Easter Yearling Sale. Shadwell Australia purchased a Redoute's Choice (Aus) half-brother to Jing Jing Win for A$1.5 million at last year's Easter sale. The winner was bred by Paul Favretto, also the breeder of top Hong Kong miler Contentment (Aus) (Hussonet).