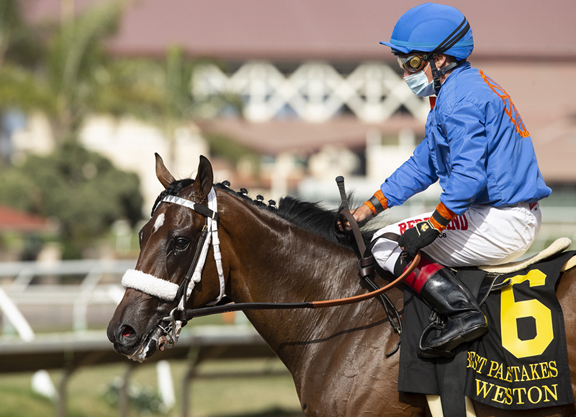 Weston became his sire (by War Front)'s first winner at Santa Anita in June, and the Spendthrift freshman's first stakes and graded stakes winner Saturday, while also providing young trainer Ryan Hanson with his first graded trophy. The bay defied 21-1 odds to run away with a 4 1/2-furlong heat June 21 over the much pricier Ambivalent (Constitution), and was backed as the best local hope to defeat heavily favored Wesley Ward trainee Roderick (Into Mischief).

Bouncing out abruptly, Weston was shuffled back in the early scramble for position but moved back up to be part of the leading vanguard with Girther along the rail and the chalk three deep. Roderick backed out of it abruptly heading for home, and Weston and Girther battled it out at the top of the lane as Ambivalent appeared a major danger for the stretch drive. Ambivalent shifted in sharply and bumped with Sonic Brees, however, effectively leaving the top two to sort it out. Girther looked the winner until late, as Weston made one last lunge to notch the decision. Ambivalent was subsequently disqualified from third to fourth.

“Boy, I had to work hard for that one. But I'm glad I did,” said winning rider Drayden Van Dyke. “I was happy to win it for Ryan Hanson. He's such a kind man and a good horse trainer. And this horse showed some class, too. Ryan told me he never got to paddock him [before the race], but he was just standing in there like an old pro. I knew I got there in the end and I'm real glad I did.”

Hanson added, “He broke sharp, just like we wanted him to, but then it looked like he just sat there for a minute. I got a little nervous when he got shuffled back, but then he got back up there and fought on. The time was not very impressive, but that doesn't matter. I didn't think we were going to win it. I thought we'd be second to the Peter Miller horse [Girther], who had had a trip over the track. But I'm just really happy. We'll see how he looks tomorrow and let him tell us what to do [regarding the GI Mar Futurity Sept. 7]. ”

Pedigree Notes:
A winner of both of his Irish starts at two for Aidan O'Brien and owner/breeder Evelyn Stockwell, Hit It a Bomb overcame the 14 hole to take the 2015 GI Breeders' Cup Juvenile Turf at Keeneland. He was twice Group-placed back overseas as a sophomore, is a full-brother to Europe's 2016 champion 2-year-old filly Brave Anna.

Weston is the 19th graded stakes winner out of a Dixie Union mare. Dam Elke was MSP as a juvenile, and was successful both dirt sprinting and turf routing. Third dam Trumpet's Blare was a GISW juvenile. Weston has a yearling half-sister by Tapiture and a foal half-brother by Speightster.

Runner-up Girther's sire Brody's Cause also stands at Spendthrift and is represented by first 2-year-olds this year.