Home » Archive » Shared News » History Served Up On A Plate

History Served Up On A Plate 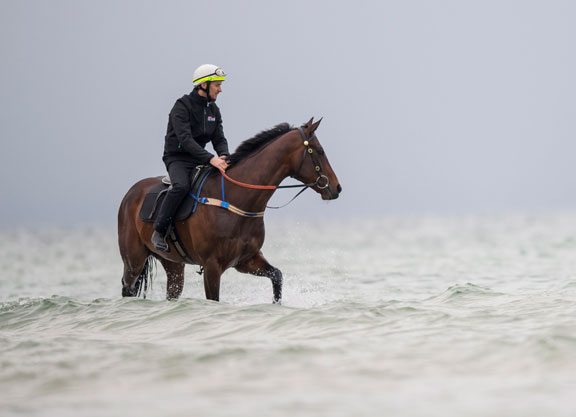 Winx at the beach earlier this week | Bronwen Healy

Many have suggested the field for the 2017 G1 Ladbrokes Cox Plate (2040m) at Moonee Valley this Saturday is somewhat disappointing, but what one can't deny is the fact that glamour girl Winx (Aus) (Street Cry {Ire}) looks set to create history if she claims her third consecutive victory in Australasia's weight-for-age championship. Set to equal the mark of the champion Kingston Town (Aus) (Bletchingly {Aus}), who was successful in 1980, 1981 and 1982, victory will also see Winx surpass the all-time prizemoney record in Australia (A$14.53-million) held by another great mare, the triple Melbourne Cup heroine Makybe Diva (GB) (Desert King {Ire}).

All of that said, racing is racing, and baring any hard luck stories, Hugh Bowman should be leading in Winx to the winners stall shortly after 5 p.m. on Saturday afternoon to the cheers of a packed Moonee Valley Racecourse with the sold out sign now on display.

Trainer Chris Waller told a Thursday morning press conference that Winx had simply been ticking over after putting in her final pre-race work on Tuesday.

“Pretty quiet days ahead; we did three-quarter pace work this morning,” Waller said. “[Jockey] Hugh Bowman was here nice and early, and he was smiling as much as he does. We were just chatting about how she was compared to last year; she basically did the same work this morning, and everything went to plan. It's just one more quiet day's work, and a jog around the park Saturday morning, and keep the nerves away from everybody– horse, trainer, staff–because it is a big deal for all of us. We understand the level of expectation of everybody, and it's fantastic to see the Ladbrokes Cox Plate as a sell-out crowd. That really is a proud moment for our sport and us, as it's directly involved with Winx.”

Discussing how Winx has grown physically from when she won her first Cox Plate at four until now, Waller said, “Condition-wise, she's carrying more weight. That, to me, would suggest she's become a stronger horse, and identical to people, we mature as we get older. She's now a very strong horse carrying a bit more muscle; does it really make them run faster? I don't know. Potentially it could make them a little more explosive. But it's hard to detract from when she did set a track record as a lighter horse as a 4-year-old and when she won by the biggest margin as a 5-year-old, and here she is as a 6-year-old in good form and still holding together very well.”

Racing for second are a handful of contenders including multiple Group 1 winner Humidor (NZ) (Teofilo {Ire}), a somewhat disappointing fifth in last weekend's G1 Caulfield Cup (2400m). Sent over a few jumps this week at Warrnambool to get his mind back on the job, interestingly the same routine applied to Caulfield Cup winner Boom Time (Aus) (Flaying Spur {Aus}) leading into his shock victory last weekend, an improved showing by Humidor will see trainer Darren Weir progress towards the G1 Melbourne Cup (3200m) with his runner.

Never having raced at Moonee Valley could cause some concerns for Humidor as some of his best wins have come from settling back and working home, and from barrier eight of nine, it is likely that he will need to go back and look to make his move mid-race.

Having one of his best campaigns, Pat Webster's 7-year-old Happy Clapper (Aus) (Teofilo {Ire}) finished runner-up to Winx three starts back in the G1 Colgate Optic White S. (1600m) on Sept. 16 before capturing his maiden Group 1 success in his next start in the Epsom H. at Randwick on Sept. 30. From the outside gate, jockey Damien Oliver will need to make his mind up pretty quickly once the field jumps as to where he will settle, but it would be no surprise to see him go forward and settle handy in the run.

Gailo Chop (Fr) (Deportivo {GB}), a dual Group 1 winner, is using the Cox Plate as a stepping stone to the Melbourne Cup, and with six wins from nine starts over 2000m, the Mark Zahra-ridden gelding looks cable of running a big race from barrier four. Owner Terry Henderson of OTI Racing told Racing.com of Gailo Chop's Cup potential, “It's certainly there as an aim if we are in a position to do it. We've always thought he would [run 3200m]. He was bought as a Melbourne Cup horse as a lot of ours at that stage were. Everything about the characteristics of the horse in terms of his lung capacity, his relaxed style of racing and you get a little bit of support from his breeding, says he'll run well in a race like the Melbourne Cup.”

Arguably unlucky when fourth on Oct. 14 in the G1 Caulfield Guineas (1600m), Tony McEvoy's Royal Symphony (Aus) (Domesday {Aus}) is the lone 3-year-old in the field and with only 49.5kg on his back, the highly touted colt should put his hand up at some stage and should appear a likely player in the finish.

Impressive in his lone Australian start when winning the Listed Cranbourne Cup (2025m) on Oct. 15, Godolphin's Folkswood (GB) (Exceed And Excel {Aus}) did finish second in the G1 Jebel Hatta at Meydan in March this year, and while it is still unknown if that form will translate here, trainer Charlie Appleby and his string last season were capable in every race they contested and the 5-year-old would not be starting here if he wasn't expected to run well. Appleby said, “We know there is a huge mountain in front of us now, but at the same time, we feel it is a great honour to participate against the wonder mare. Being among her rivals, we are all on the same page, but as Hugh Bowman said, at the end of the day it is a horse race. I am happy with the draw, and I am very pleased the way Folkswood has come out of his Cranbourne experience.”