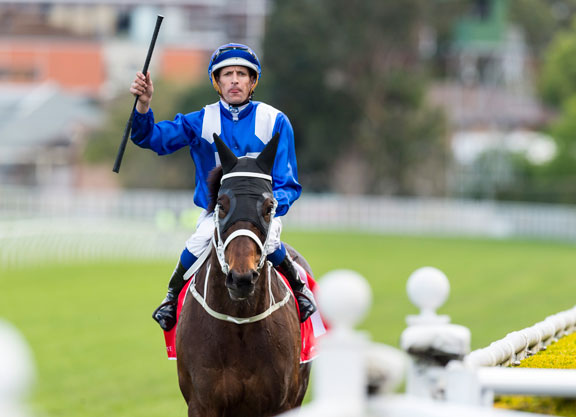 A crowd of 32,617 packed into Melbourne's Moonee Valley Racecourse on Saturday to witness history, and Winx (Aus) (Street Cry {Ire}) gave them what they came for when digging deep to hold off Humidor (NZ) (Teofilo {Ire}) for a third consecutive win in the A$3-million G1 Cox Plate. In doing so, Winx became just the second horse to win three renewals of the country's weight-for-age championship, following Kingston Town in 1980 – 82. She beat her own track record, set winning this race two years ago; she became Australia's richest-ever racehorse with A$15,578,000 in the bank; she equaled Black Caviar's tally of 15 Group 1 wins, and recorded her 22nd straight victory. A bit fractious in the barriers, Winx broke sharply–something she had not always done this prep–and was eased back by Hugh Bowman to sit midpack and three-wide into the first turn as Gailo Chop (Fr) (Deportivo {Fr}) took up the running and Humidor saved ground last of eight and on the fence.

Winx settled about six lengths off the lead as Humidor improved a few positions to settle on her heels on the inside, and Blake Shinn aboard Humidor kept the great mare in his sights as Winx began to edge closer approaching the short straight. As Winx brushed aside Gailo Chop and swept to the lead passing the 200, it appeared on the surface that there was nothing between her and her historic victory, but boiling up in behind was Humidor, who unleashed a furious rally as Bowman scrubbed away on Winx. Ultimately the line came in time and Winx won by a half-length under a vigorous handride, while this season's G1 Makybe Diva S. winner Humidor put up an admirable display and firmed into favouritism for the Nov. 7 G1 Melbourne Cup.

“A whole host of things went through my mind towards the end,” trainer Chris Waller admitted to Racing.com. “Will she, won't she? Where's the finishing line? How's the other horse going? Who is the other horse? But she got there, and that's all that matters. There were obviously moments of concern down the straight, but she's Winx and she finds a way to win like all champions do. She's unbeaten for almost three years now, and I'd be lying if I said I didn't go to bed at night thinking of her getting beaten.”

Waller may not have to worry about that for another few months, as Winx has just a 40% chance of lining up in the G1 Emirates S. on Nov. 11.

“We'll make a decision next week whether she has another run at Flemington or whether she goes for a spell,” Waller said. “It doesn't matter to her and us whether the [Emirates] is worth a thousand dollars or a million, we'll do what's best for her as we always do. She'll be well looked after, that I do know.”

Bowman had nothing but praise for the great mare.

“I was born the year Kingston Town won his first Cox Plate and to think she's emulated the great–trying to compare one horse to another, they're all different animals at the end of the day. But we are in the presence of greatness. She'll be recognised as one of the greatest horses to grace the Australian turf.”

“I've had an amazing career,” Bowman added. “Winx delivered me my first major Group 1 race three years ago and she's now delivered me my only other two. She's the type of horse you dream of, everybody dreams of, and to be a part of it. As a racing lover, as an animal lover, I get great satisfaction watching any good horse, or exceptional horse and this Thoroughbred has brought so much joy to my life, my family's life, and I know everybody is very proud of what we've achieved together.”

Blake Shinn, who went into the Cox Plate in bullish mood after winning four races on the undercard, told Racenet.com.au after nearly pulling the upset of the century, “I thought when I made a run we were a real chance but Winx is a champion, she just keeps responding under pressure. To run a champion so close is a huge achievement.”

Winx kicked off her current streak in the 2015 G3 Sunshine Coast Guineas, and she has since thrilled crowds across the country with facile wins in races like the G1 Epsom H., multiple renewals of the G1 Chipping Norton S. and G1 George Ryder S., and at the last two renewals of The Championships in the G1 Doncaster Mile and G1 Queen Elizabeth S., respectively. Winx has given her backers more heart palpitations this season, however. She got up for last-gasp victories after breaking slow in her first two outings of the season, the G2 Warwick S. and G2 Chelmsford S., but the result of her final Cox Plate prep, the G1 Turnbull S., was never in doubt as she sailed home by 6 1/2 lengths at Flemington on Oct. 7. While the odds presented by Waller suggest Winx will now head for a much-deserved spell, the autumn is bound to hold plenty more excitement for Winx's loyal legion of fans both Down Under and around the globe, with her connections repeatedly reporting they are seriously entertaining international targets for their wonder mare.

Now that she is Australia's richest-ever racehorse, the A$230,000 paid by part-owner Magic Bloodstock for Winx at the 2013 Magic Millions Gold Coast Yearling Sale looks like a colossal bargain. Winx is the second foal out of Vegas Showgirl, who was crowned champion broodmare of 2016 after her exploits were also boosted by El Divino (Aus) (Snitzel {Aus}), who became a 'TDN Rising Star' with a debut win before dead-heating for the victory in the G3 Kindergarten S. at The Championships on the same day that Winx won the Doncaster. That week was an especially fruitful one for John Camilleri's Vegas Showgirl; a few days later her then-yearling Snitzel colt, now named Boulder City (Aus) and in training with Gai Waterhouse and Adrian Bott, topped the Inglis Easter yearling sale at A$2.3-million. Vegas Showgirl produced a filly by Snitzel at Segenhoe Stud last year and this season she foaled a filly by Exceed and Excel (Aus). Click for the free arion.co.nz catalogue-style pedigree.