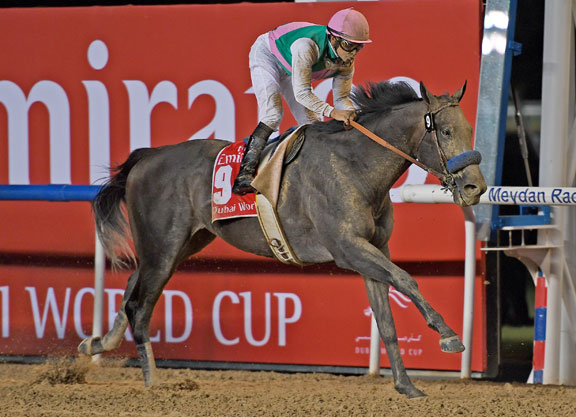 “Hill 'n' Dale has established itself as among the very best in all areas of the Thoroughbred business, so we are very pleased to be involved in a partnership with them on Bubbler,” a statement from Clearsky Farm read. “We are very excited about Bubbler's future, with her second, third and fourth foals yet to race, and hopefully we can both share some success with her.”

Arrogate, who has taken the racing world by storm with wins in the GI Travers S., GI Breeders' Cup Classic, GI Pegasus World Cup Invitational, and G1 Dubai World Cup, is Bubbler's first foal. She has a 2-year-old filly by Medaglia d'Oro, a yearling filly by Giant's Causeway and she produced a filly by Into Mischief this spring.

Clearsky Farms plans to retain both the mare's Giant's Causeway filly and her Into Mischief filly to race. The Medaglia d'Oro filly sold for $300,000 to Bridlewood Farm at last year's Keeneland September Yearling Sale.

The late Eamon Cleary purchased Bubbler for $170,000 at the 2010 Fasig-Tipton November Sale. The mare, in foal to Into Mischief, RNA'd for $4.7 million at that auction last fall, just days after Arrogate's Breeders' Cup Classic victory.

“We are grateful and excited to become co-owner with Clearsky Farm of Bubbler,” Sikura said in a statement. “As the dam of Arrogate, the world's highest-rated racehorse, and in foal to Classic sire Tapit, we feel Bubbler is a remarkable opportunity to enhance our brand. Our goal is to continue to assemble a world-class broodmare band and associate with leading breeders like Clearsky Farm.”