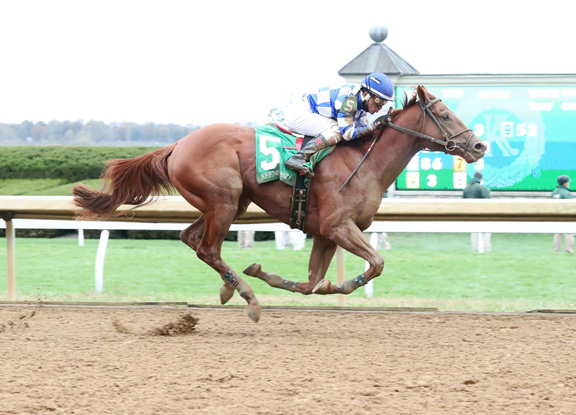 The connections of Hidden Stash believe their Kentucky Derby contender  has yet to show his best hand. | Coady

Vicki Oliver has dreamed of making it to the starting gate on the first weekend of the Churchill Downs spring meet for her entire career, but the Kentucky Derby was never the race she had in mind.

Vicki and Phil Oliver established their stable in 1999 and have since had several top graded winners go through their program including Grade I winners Personal Diary (City Zip) and Last Full Measure (Empire Maker).

The majority of their stable's top performers have been fillies, and many of those pupils were supplied by Oliver's father, prominent owner and breeder G. Watts Humphrey Jr.

“I've been training for my father for over 22 years,” Oliver said. “He's been my biggest supporter and I always thought if I was going to be running this weekend in a big race, it would be for him in the Oaks.”

But this year, Oliver finds herself journeying to Louisville on one of the biggest weekends in racing alongside a colt readying for his bid in the Kentucky Derby.

Hidden Stash has yet to find the winner's circle this year, but strong performances in a trio of graded starts against top company have his connections convinced that they still have yet to see the best of what the son of Constitution has to offer.

“His works have been fantastic,” she said. “In his work [on April 14] he got his workmates just past the wire, which was good for him. He's actually a pretty laid-back guy. He doesn't worry about much, which is a nice thing for a horse going into the Derby with the crowd, the post parade and everything.”

In addition to being Oliver's first-ever Derby entry, Hidden Stash will take his owners to their first Run for the Roses.

BBN Racing was founded in 2017 by Brendan O'Brien and Brian Klatsky, both partners in the New York-based Gold Coast Wealth Management, as well as Royal Oak Farm's Braxton Lynch.

“We were trying to figure out a model in racing where we could bring sports fans, friends and family into the game and have some financial structure around it where it just wasn't bills after bills,” said Klatsky, who also founded and oversees an AAU basketball program in New Jersey called Team Rio.

BBN enjoyed success early on when a filly they had bought in on named Concrete Rose (Twirling Candy) broke her maiden on debut at Saratoga.

After Concrete Rose became a four-time graded stakes winner, including a victory in the 2019 GI Belmont Oaks Invitational S., the BBN Racing team returned to the sales in search of their second group of runners.

“The whole purpose of BBN surrounds around the idea of having as many opportunities within one crop,” Klatsky explained. “We want to diversify the portfolio with six or seven horses that will develop and this way, someone that is new to the game doesn't lose interest if their first horse doesn't work out.”

The BBN team, along with trainers Rusty Arnold, Vicki and Phil Oliver, plus consultant Bo Bromagen, took on the 2019 Keeneland September Sale.

The group landed on a colt by Constitution out of the Pennsylvania-bred Making Mark Money (Smart Strike).

“Everyone saw something in him,” Klatsky recalled. “They all had a different opinion, but everyone liked something about him. This was right before Constitution was really starting to heat up. I think it was about a week before he had a couple of big 2-year-old winners. When he went through the ring, we got him for $50,000.”

When Hidden Stash eventually arrived at the Olivers' stable as a juvenile, they knew they had their work cut out for themselves.

“He was a really big baby when we first got him,” Oliver said. “He was all over the place and really immature. He didn't want to switch leads in the afternoons and just didn't know what was going on.”

It took a few tries for the youngster to figure out his job, first running fourth at Ellis Park and then getting up for third in his next start at Churchill Downs.

By the end of the Keeneland October meet, the pieces started falling into place and, despite hanging onto his left lead going down the stretch, he broke his maiden by three lengths. In his final start at two, he charged home to claim a victory over allowance company going a mile and a sixteenth under the Twin Spires.

“After he won at Churchill Downs, we thought we might have a really nice 3-year-old on our hands,” Klatsky said. “We wanted to be patient. We really felt that the mile and a quarter was something that he would really like a few months down the road, so we gave him some time and came back to the races in February.”

Hidden Stash ran third in the GIII Sam F. Davis in his sophomore debut before crossing the wire second less than a length behind Helium (Ironicus) in the GII Tampa Bay Derby.

“In that race, I think he just got a bit lackadaisical,” Oliver admitted. “I thought he was going to go past the winner and he didn't, so I think he just lacked experience. But that was probably his biggest race so far this year.”

Up against champion Essential Quality (Tapit) in the GII Blue Grass, the colt ran towards the back of the pack through most of the race and was moving up coming into the stretch, but couldn't do better than fourth.

“Essential Quality and Highly Motivated (Into Mischief) pretty much dictated the pace that day and had their way,” Klatsky said. “He was passing horses and didn't get his chance to show his best. But he continues to develop, so stretching out now into a mile and a quarter, we think he has his best race still ahead of him.”

Despite the long odds, Derby Day will be particularly special for Klatsky because of his close association with the horse's various connections.

“I've been a guest of the Humphrey family at the Kentucky Derby over 15 times and I've always been in awe and never realistically thought we would be here with a runner,” he said. “Watts has played an integral role in mentoring me and teaching me the game. The lessons I've learned from him over the years were a big part of how we built the foundation for BBN.”

He continued, “I've known Vicki and Phil for close to 22 years now. I met them when they started training at Monmouth Park and we were all in our late 20's and early 30's. That's what makes this really special for me is to have been through 20 plus years of racehorse ownership and to be at the Kentucky Derby is something you dream about, but it's never a realistic goal. It's so hard to get here and there's so much more to the sport of racing than just the Kentucky Derby, but to be in this situation with the people that I learned the game with really makes it special.”

“The Kentucky Derby is the pinnacle,” he said. “It's really exciting to have people that are friends and don't follow racing actually draw interest now because it's the Kentucky Derby. You really can't put words around it. I haven't been able to sleep well for weeks now. But whatever happens on Derby Day, to me, is just a blessing. Just being a part of this whole journey is just as exciting as race day.”

Oliver said she still has the dream of getting a G. Watts Humphrey Jr. homebred in the Kentucky Oaks winner's circle, but for now she's taking in the Derby journey one day at a time.

“I never actually dreamed that we would be able to get into the Derby because most of the horses in our barn are fillies,” she said. “I can't believe that in our first few years with BBN Racing that we got one in the Derby. It's a bit surreal. But all the hard work is done now. We've just got to keep him on the ground safe until Derby Day.”