Hi Happy to Stand in Argentina 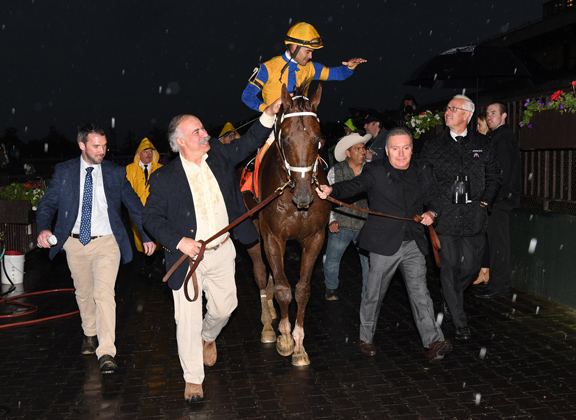 Hi Happy (Arg) (Pure Prize–Historia {Arg}, by French Deputy), Argentina's Horse of the Year, champion stayer and Triple Crown winner of 2015 who would later annex the GI Man o' War S. at Belmont last year, has been retired to stand stud in his native country. He will stand at Haras Vacación on behalf of a syndicate of his owner/breeder Haras La Providencia, Haras Firmamento and Haras Santa Ines.

A full-brother to Chilean Group 1 winner Hinz (Arg) and Argentinian Group 1 winner Hispanidad (Arg), the chestnut annexed the prestigious G1 Carlos Pellegrini in 2015 before being sent to Southern California with trainer Felipe Souza. He was a close third in the GIII Tokyo City S. on the dirt at Santa Anita in 2017, but really blossomed last term when sent to Todd Pletcher, racking up a pair of graded wins including the aforementioned Man 'o War in May and earnings of $780,800. He retires with an overall record of 19-8-1-4 and a total bankroll in excess of $1.3 million.

“We were always aware of what his future could be, with an interest in being able to add it when his campaign ended,” said Agustín Ventimiglia of Haras Vacación. “We were convinced that he deserved his opportunity here and we wanted to give it to him. Any breeder would like to have a horse like that… Unbeaten in Argentina, with four Group 1 victories, and then tested in the United States among the best, he made clear his quality.”