He's Bred Exactly One Horse, And She Won the Kentucky Oaks 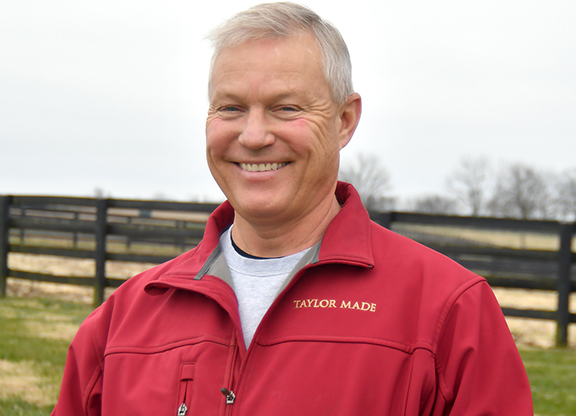 Though he works for Taylor Made, Val Henson is not a name widely known in horse racing. That's because his job at the farm is Director of Maintenance and Special Projects, which means handling issues like overseeing fence repair and barn maintenance. Nothing he does involves working with the horses.

But being around horse people led Henson to decide to dabble in racing, albeit on a small scale. He and a partner, Mark Hartig, started by involving themselves in a pinhooking venture. They made some money off of that, and rolled the dice again when deciding to buy a share in the stallion Alternation. He needed a mare so he bought an unraced 3-year-old named Havisham (Bernardini) for $5,000 at the 2015 Keeneland January Sale and bred her to Alternation.

The mating resulted in a dark bay or brown filly named Serengeti Empress, the winner of the 2019 GI Kentucky Oaks.

“Man, did she run like crazy Friday,” Henson said. “It was incredible to be at the Oaks and be in the winner's circle. I still can't believe that it happened. To get into the Oaks and win the Oaks, the odds of that are astronomical.”

Henson said he's not the one who deserves the credit, and neither does Hartig.

“He knows less about racing than I do,” he said.

Henson was talked into getting involved in racing by Jacob West, who at the time worked at Taylor Made and was engaged to Henson's daughter. West, who is now the vice president of bloodstock for Eclipse Thoroughbred Partners, told his future father-in-law that he thought he should try buying a horse or two.

“He got me involved with that colt that we pinhooked,” Henson said. “We sold that colt and did well and I told him that if we made some money I'd be interested in taking that money and reinvesting it in something else.”

West told Henson that shares were available in Alternation, who stands at Pin Oak Stud, and that he thought the stallion, whose stud fee is $10,000, was “a real bargain.”

“I thought Alternation was a really good stallion prospect and that he was a good value,” West said. “It was a good way for them to dip their toe in the water,”

Henson and Hartig agreed and then sent West to find them a mare. But why Havisham, a Darley homebred who never made it to the races?

“Jacob has a pretty good eye for picking out horses and we needed a broodmare,” Henson said. “He thought this mare, at the price we paid, was a great deal.”

Serengeti Empress was put into the 2016 Keeneland November sale as a weanling and sold for just $25,000. She showed up the next year at Keeneland September and was bought as a yearling by Joel Politi for $70,000.

Though Henson no longer owned the filly, he was enjoying the ride. Trained by Tom Amoss, Serengeti Empress won two stakes as a juvenile, including a 19 1/2-length romp in the GII Pocahontas S. in September. She finished seventh in the GI Breeders' Cup Juvenile Fillies and then kicked off her 3-year-old campaign with a win the GII Rachel Alexandra S. at the Fair Grounds. After that win, Henson bought his tickets for Oaks Day and couldn't wait to see the horse he bred run in the Oaks. But it almost didn't happen. Serengeti Empress bled in the GII Fair Grounds Oaks and lost by 50 lengths. There were no guarantees that Amoss was going to get her right in time for the Oaks, but he did. She went wire to wire, winning by 1 3/4 lengths.

As big an accomplishment as it is to breed a Kentucky Oaks winner, the victory did little to enhance Henson's bank account. They not only sold Serengeti Empress for $25,000, but let Havisham go at the same sale for $12,000.

Any sleepless nights over the decision to sell the weanling and the mare, both of whom are now very valuable?

“I think about that a lot,” Henson said. “You have go on the advice of those who really know what they are doing, and that's not us. We followed Jake's advice in the beginning and look what he did for us. On any decision we ever make when it comes to racing, I will do what he says. That's how much faith I have in him. We weren't looking to make it big in any way. It was more a hobby type of thing. Would I love to have the filly and the mare and the full sister to Serengeti Empress she was carrying when we sold her? I'd be lying if I said I didn't care about the money. That's silly. Who wouldn't want to still own those horses? But I certainly have enjoyed the ride, being able to be part of the whole process and getting the breeders' awards.”

Henson has no plans to get into breeding on a major scale, but he has caught the bug and is ready to try again.

Henson and Hartig bought a 25% interest in a mare named Popstar (Medaglia d'Oro), who just delivered a foal by Midshipman, and they still have the share in Alternation.

“I'll be active in November to find them another mare to breed to Alternation,” West said. “We'll try to catch lightning in a bottle again.”

Can they pull it off again? Probably not. But Val Henson bred a Kentucky Oaks winner in his very first try. There may be no topping that.