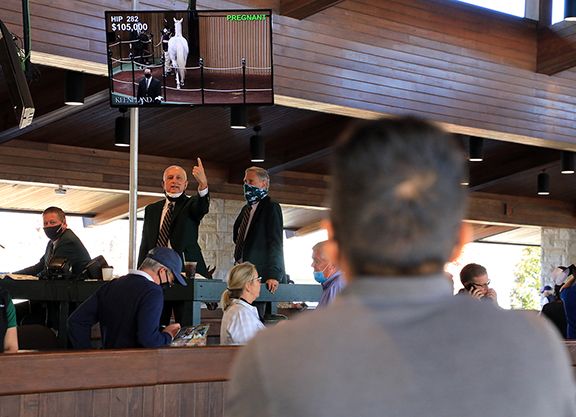 Ricardo Ramirez, who was working at the Keeneland January sale for consignor James Herbener Jr., passed away Tuesday, dying of an apparent heart attack. He was 66.

Herbener said that Ramirez was about to short bring a yearling into the sales ring when the incident occurred.

“Yesterday, he was walking a yearling going up to the ring,” Herbener explained. “He was in the back walking ring and he just collapsed. We think it was a heart attack. The coroner called me after that and asked some questions. He had apparently had COVID in November, so there’s a possibility there were underlying conditions with his heart that nobody knew about. The coroner said that he had no trauma.”

Herbener expressed his frustration that Ramirez was not dealt with more quickly after collapsing.

“It’s kind of a shame,” he said. “The response was kind of slow, getting to him. We told them he had just collapsed, that he wasn’t kicked. But they didn’t want to be pushing on his chest. I don’t know if he could have been saved. After the four or five seconds it took for me to get there, it looked like he was leaving us. But if he could have been saved, way too much time went by.”

Herbener said that Ramirez only worked for him at the sales and drove a cab in Lexington during the rest of the year. He added that Ramirez had worked in the horse industry in Central Kentucky for more than 30 years and had previously worked at Ashford Stud.

“He had a house in Versailles and came from a really nice family,” Herbener said. “I know that he had a daughter and had been married to his wife for quite some time. He’s someone who had done real well for himself since he came to this country from Mexico. Here’s someone who left for work in the morning and never made it home. You never know when you’re time is going to come. It’s pretty sad.”

Keeneland issued a statement regarding Ramirez’s death on Tuesday.

“Keeneland is deeply saddened by the death of Mr. Ramirez, and we send our heartfelt condolences to his family, friends and co-workers,” Keeneland President and CEO Shannon Arvin said. “The safety and welfare of everyone on Keeneland’s grounds is paramount. It is for this reason that Keeneland’s first response team completes regular training in the management of emergency situations. As with every incident, we are conducting a thorough after-action review and continuously strive to ensure the safest environment possible for our participants.”