Hello Youmzain Bought by Haras d’Etreham and Cambridge Stud, Will Race On 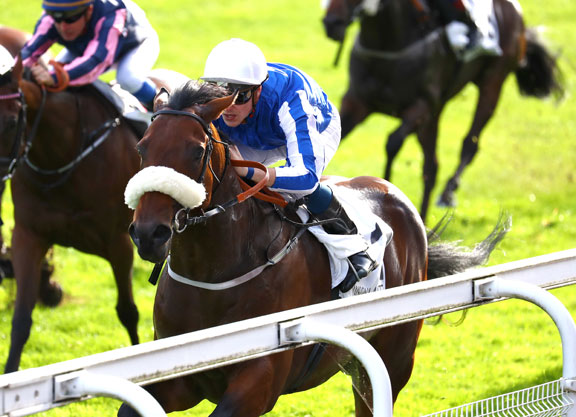 G1SW Hello Youmzain (Fr) (Kodiac {GB}-Spasha {GB}, by Shamardal) has been purchased by Haras d’Etreham and Cambridge Stud and will remain for the time being with trainer Kevin Ryan. Upon retirement, the colt will split his time between the French-based Haras d’Etreham and also serve mares in the Southern Hemisphere at Cambridge Stud in New Zealand. The deal was brokered by Hubie De Burgh of Deburgh Equine. The two studs previously joined forces with champion and MG1SW Almanzor (Fr) (Wootton Bassett {GB}).

“We are thrilled to be involved in a top class sprinter like Hello Youmzain who will be a great addition to our roster,” said Haras d’Etreham’s Nicolas de Chambure. “He is a beautiful colt with great strength and scope and has a very good walk. Kevin Ryan has done a great job with him and we are hoping for a successful season next year where we will race him with Cambridge Stud and some partners including SF Bloodstock and Haras de Voltaire.”

A winner of the 2019 G1 Sprint Cup at Haydock last out for  Ryan and previous owner Jaber Abdullah, the Rabbah Bloodstock-bred also won the G2 Sandy Lane S. this term and was third in the G1 Commonwealth Cup at Royal Ascot. As a juvenile, the bay won the G2 Criterium de Maisons-Laffitte in October of 2018. His record currently stands at 7-4-1-1, $480,227.

believe Hello Youmzain has the perfect profile for New Zealand and Australia,” added Cambridge Stud’s Henry Plumptre. “His pedigree is highlighted by the presence of Danehill, Invincible Spirit (Ire) and Shamardal–three of the most influential international sires of the modern era.”

“He is a highly talented sprinter who will only get stronger

next year as a 4-year-old,” said Ryan. “He has been a real star this season and we are excited for a good campaign with him in 2020 for his new owners. We look forward to running Hello Youmzain for his new connections on Champions Day at Ascot when he will contest the G1 QIPCO Champions Sprint which will be an exciting start for all.”