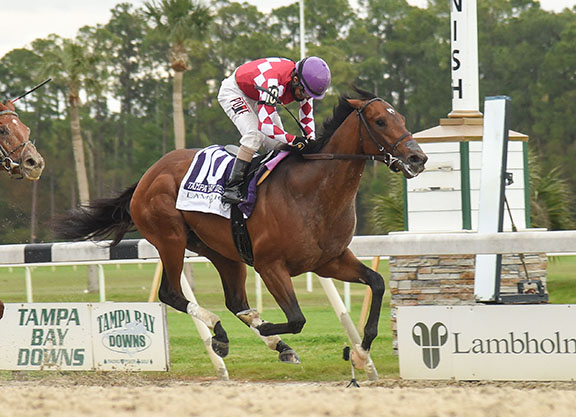 Helium was slow into stride from a wide gate and was left no choice but to take the first turn in about the six path while racing with just two rivals behind. Five or six paths off the inside down the backstretch, Helium went for an early run with about a half-mile to run, but continued to be trapped off the track, as favored GIII Sam F. Davis S. winner Candy Man Rocket (Candy Ride {Arg}) was moving simultaneously underneath him.

Consigned to a five-deep trip around the second turn, Helium nevertheless gained steadily on the leaders, was shifted down to the inside when making the lead in upper stretch and managed to hold sway late.

Hidden Stash, a closing third to Candy Man Rocket in the Sam F. Davis, looked to have Helium at his mercy at the sixteenth pole, but was swatted away late and settled for second.

Candy Man Rocket was out of gas by the top of the stretch and tired to 11th.

“Our biggest concern going into the race was not only the competition, but also the distance, because he had never gone further than seven furlongs,” said DJ Stables Racing Manager Jon Green. “We were also concerned about the surface, because he had only run on the Tapeta at Woodbine. So we felt like he had three things he had to accomplish today–not only to beat the top horses in the race, but also overcome the two turns, the surface, and the layoff. So for him to accomplish what he did today by holding off a very nice horse in Hidden Stash, made us very excited for his future.”

Green added, “As of now, we're unsure as to his next start. We're going to analyze where the competition is going and decide what would be his best spot.”

Helium is not currently nominated to the Triple Crown, but will be supplemented for $6,000 at the next deadline at the end of March, said Green. “He has certainly punched his ticket.”

Helium was purchased privately last March as a 2-year-old from Bo Hunt. “The horse industry certainly works in mysterious ways,” said Green. “If it weren't for COVID, we never would have been able to buy this horse. We bought him privately because we weren't sure what was going to happen with the sales.”

Green said, “I really want to give Mark Casse tremendous credit for being able to be flexible with this horse and pivoting as many times as we did with him before landing on the Tampa Bay Derby in his 3-year-old debut.”

Casse said, “He trained well enough that we thought he deserved a chance. Again, I have to give so much credit to Nick Tomlinson who had him down at Palm Meadows for us. We had thought about running in the Gotham and thought, if we're going to try the dirt, let's run him close to home. It worked well for us.

Casse continued, “This horse is something because he got away a little slow today and we had planned on him being closer. He made that big wide run, he made the lead but [after Hidden Stash rallied] I was going to be happy with second. I thought, we can build on this, because this is only his third start and there is a lot of room for improvement. What was amazing is that he wasn't overly exhausted after the race. He's a beautiful horse, he's bred to run all day long and he looks like a Derby horse, so it's exciting.”

Winning rider Jose Ferrer added, “On the backside, I had all kind of horse under me, and when I set him down at the three-eighths pole, I could see I had a chance. I just had so much horse and he flew down the lane. Then I think he got by himself and kind of got bored and he thought, game over. But I still had plemty of horse and be re-broke again.”

Helium hails from the first crop of Ironicus. He became the first stakes winner for the young Claiborne sire after securing last term's Display and is also his first graded winner. This is the 46th graded winner for Thunder Gulch as a broodmare sire.

Progeny in the pipeline for Thundering Emilia include the 2-year-old colt Thunder Stride (Classic Empire) and a yearling colt by Accelerate. She was bred to American Pharoah for 2021.

This is the family of Peruvian champions Valiant Emilia (Per) and Domingo.