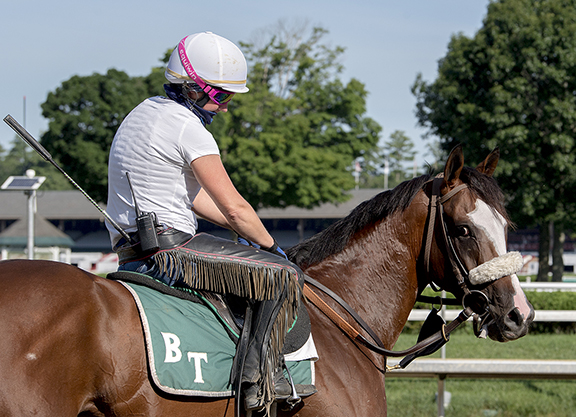 SARATOGA SPRINGS, NY – Every morning when Tiz the Law (Constitution) goes out to the track for his exercise, there is a Smullen from Oxford, PA on his back.

Most days the likely favorite for the GI Kentucky Derby is carrying Robin Smullen, trainer Barclay Tagg's longtime assistant and life partner. Once a week, when the colt has his timed workout, though, Heather Smullen, Robin's 38-year-old niece, has the assignment. It is a challenge, she acknowledges, to keep the four-time Grade I winner to the task while not getting in the way.

“He is pretty impressive,” Heather Smullen said. “The goal is always to make it look–for him, it is effortless–for the person sitting on his back, you want to make it look as effortless on your part, because the more I do, the more it either annoys him or distracts him. He knows to do his job. When he was younger he was a little bit green. Now he does his job very well. That being said, you've got to tell him. 'We've got to stop. We can't be going this fast. We really don't need to go quite this fast.' You have to do it in a way that he is cooperative because you don't demand anything of him. You ask him nicely and hope he agrees because he is a very athletic horse.”

Like her aunt, Heather Smullen grew up around horses and moved from the show ring to the business of Thoroughbred racing. Since graduating from Cecil College in Northeast Maryland near the Fair Hill Training Center, where she studied photography and digital imaging, she has added to her resume working for trainer Ralph Hicks and Alan Cohen's Arindel Farm. Since her teens, Smullen has been connected to Tagg's stable. Tagg quipped “I haven't been able to get rid of her since” she spent a summer in Saratoga with Robin and him about 20 years ago.

The enthusiastic teenager has emerged as an important member of the team that is preparing Sackatoga Stable's once-beaten colt for the Derby. As usual, she was up on Tiz the Law when he worked five furlongs in a bullet :59.47 in the darkness at 5:30 a.m. Sunday. She will be aboard when he has his final Derby work this weekend and will accompany the New York-bred on his flight to Louisville on Monday.

Smullen said it is clear that he understands what is ahead on the mornings when they are together.

Smullen said that Tiz the Law is very much aware of who he is, what he can do and the array of people around him.

Heather Smullen is the daughter of Robin's older brother, Randy. Robin and Randy and their siblings were raised on the family's 120-acre farm that was home to 25 horses. A couple of decades later, history repeated itself with the next generation of Smullens. Robin was already in the formative years of her Thoroughbred racing career when Heather was a youngster with an interest in horses.

Robin described the relationship with her niece as being more like they are sisters and said she was proud of what she accomplished.

“Oh, sure. How could I not be?,” Robin Smullen said. “She does everything really the way you want it done. She's very astute with soundness issues. A lot of that she learned from me, too. Hind-end issues she really picked up on right away. But, there again, she grew up on a horse, so she learned it quickly. She had to re-adjust her riding skills to get along with the racehorses. She can hold a really strong horse and she's a little tiny thing. I showed her easier ways to hold horses and she caught right on when she started doing it.

“I was kind of out of the picture with her when she started learning to gallop, but when she went to work for Barclay and got on some real difficult horses I showed her the best way to get along with a real difficult horse. She just caught on. Everything is really natural to her.”

During her career as an exercise rider and assistant trainer Heather Smullen has been up on many top-level horses. She was the regular rider of the Ralph Nicks-trained GI Breeders' Cup Juvenile Fillies winner Caledonia Road (Quality Road) and handled Tale of Ekati (Tale of the Cat) and Big Truck (Birdrun) among others for the Tagg stable. On a few occasions, Smullen filled in for her aunt on Funny Cide (Distorted Humor), Sackatoga's 2003 Derby and GI Preakness S. winner. She called him the strongest horse she has been on as she compared him to Tiz the Law.

“And he would give you goosebumps just going. The stride on him was incredible,” she said. “But he only had one way of going and that was fast. And this horse is much more tactical. He is much more manageable but he does play games. He messes with other horses, and messes with you if you don't let him go fast enough.”

Smullen smiled as she explained how Tiz the Law “messes” with other horses on the track.

“He will either try to buzz horses or he will be like, 'let's go to the outside, let's go past this horse and go faster,'” she said. “He is just smart, so he plays games. If you don't let him go fast, he will find something else entertaining to do. So, with him, the most impressive thing about him is that he has a turn of foot like no other horse that I have ever been on. You can be going at a cruising speed, which is fast, and if you just put your hands down and smooch to him and say 'go' two or three strides, he is gone. Most horses it takes a sixteenth of a mile to get running.”

To make her point, Smullen explained how horses can be slow to accelerate in a race when a jockey asks them to get into a spot, which can cost them position and ground.

“It does not take him awhile to get running. There are very few horses I have ever been on that have the turn of foot he has,” she said. “I have never gone on him as fast as he can go. We were joking the other day about that. I have never ever been on him in a work where you had to say 'go' because he goes so fast. When he was a baby you would ask him because you were teaching him stuff. Now he knows. So, how fast would he be if you asked him? I don't want to find that out. I just want to keep him nice and sound and win a lot of races.”