Heart to Heart Gets His Grade I at Gulfstream 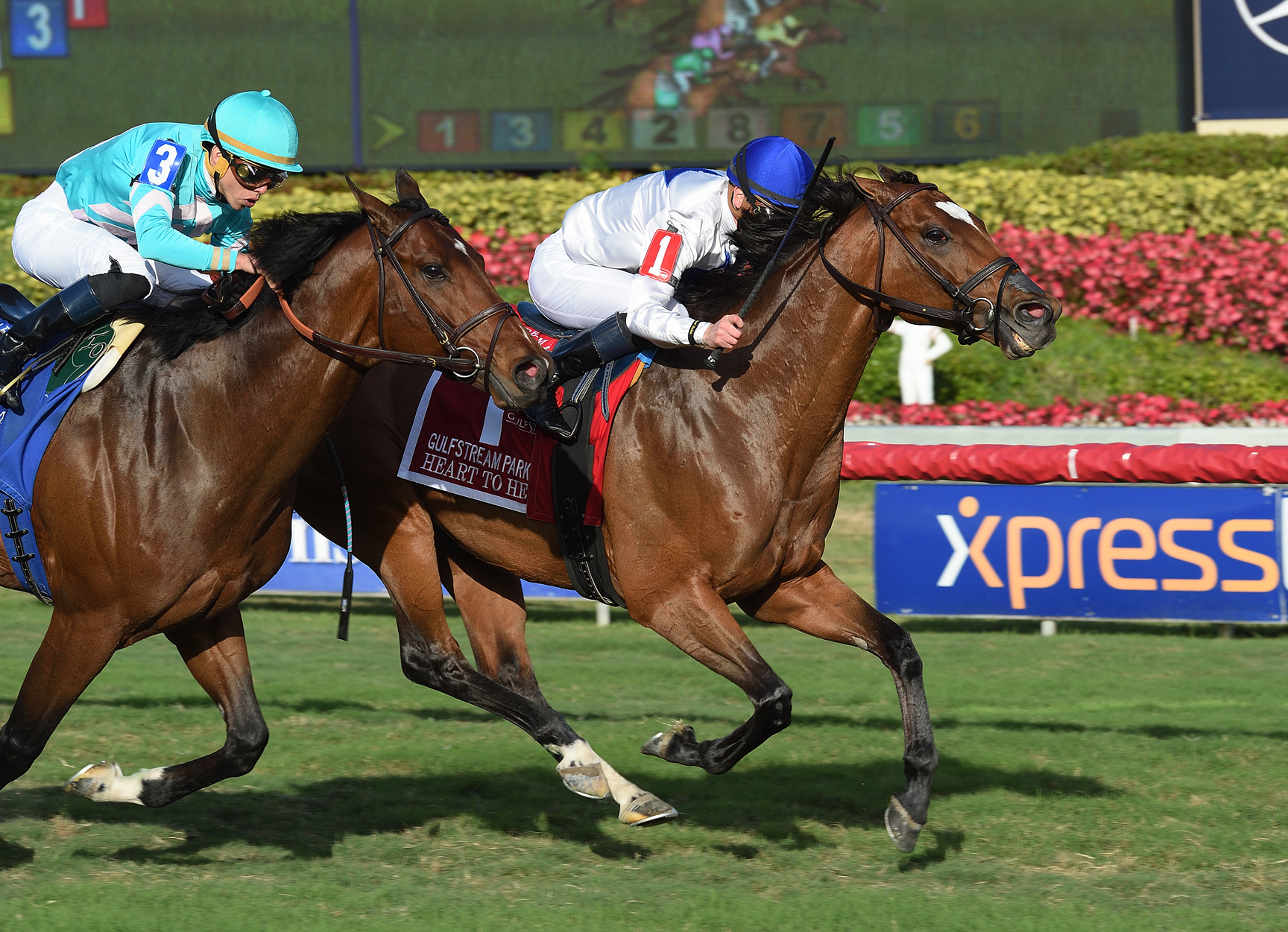 Heart to Heart had settled for second in Grade I company three times previously, but the speedy 7-year-old finally came out on the other end of a close one Saturday to break through at the highest level.

Boasting a four-for-six record over the local lawn and two wins from three tries at nine panels, the bay zipped to the front from his rail draw as expected. He seemed briefly like he'd take heat from a keen One Go All Go, but that one settled down into the first turn and allowed Heart to Heart to find his rhythm through splits of :24.15, :48.74 and :1:12.08. Kurilov (Chi) loomed the clear main danger as he revved up from the pocket spinning for home, and while that foe gave game chase, Heart to Heart had enough left in the tank to find the wire with a sliver to spare.

“He broke good and I got to the lead, and I was pretty comfortable the whole way,” said rider Julien Leparoux, who was climbing back aboard Heart to Heart for the 16th time, having been in the irons in only one of his last four prior starts. “I'm glad the wire was coming, too, though because they were coming fast at the end. The horse he tries, he tries hard, and he deserves that Grade I win and we finally got one. We're all very happy about it.”

A winner of the GIII Canadian Turf S. here some 11 months ago going a mile, Heart to Heart missed by a neck when second in Keeneland's GI Maker's 46 Mile in April and checked in third by 3/4 of a length in Santa Anita's GI Shoemaker Mile in June. He returned to winning ways in Saratoga's GII Bernard Baruch H. Sept. 4, but was again collared late to play second fiddle in Keeneland's GI Shadwell Turf Mile Oct. 7. Tenth, beaten three lengths in the GI Breeders' Cup Mile Nov. 4, he was most recently seventh after a uncharacteristic poor start in the GII Fort Lauderdale S. here Jan. 13.

“The elusive Grade I!” beamed Heart to Heart's trainer Brian Lynch. “Watching him come back in and blowing as hard as he blew after that race, he gave it his all to win the race. He's an absolute deserved horse to have a 'one' next to his name. It's nice to get it done here, because he's always loved this track.”

Heart to Heart's dam Ask the Question most recently sold for $35,000 in foal to Silent Name (Jpn) at the 2014 Keeneland November sale. The resulting filly, bred by Hidden Brook Farm, Everett Dobson and Chris Swann, was a $4,500 KEESEP yearling RNA, but was a maiden special weight winner up at Woodbine in October. Ask The Question's 2-year-old Animal Kingdom colt was a $75,000 KEESEP yearling purchase by Cecil Seaman. She produced a Liam's Map colt last term before highly coveted visit to Quality Road this past breeding season.