Hayes Mares On Song For Goffs 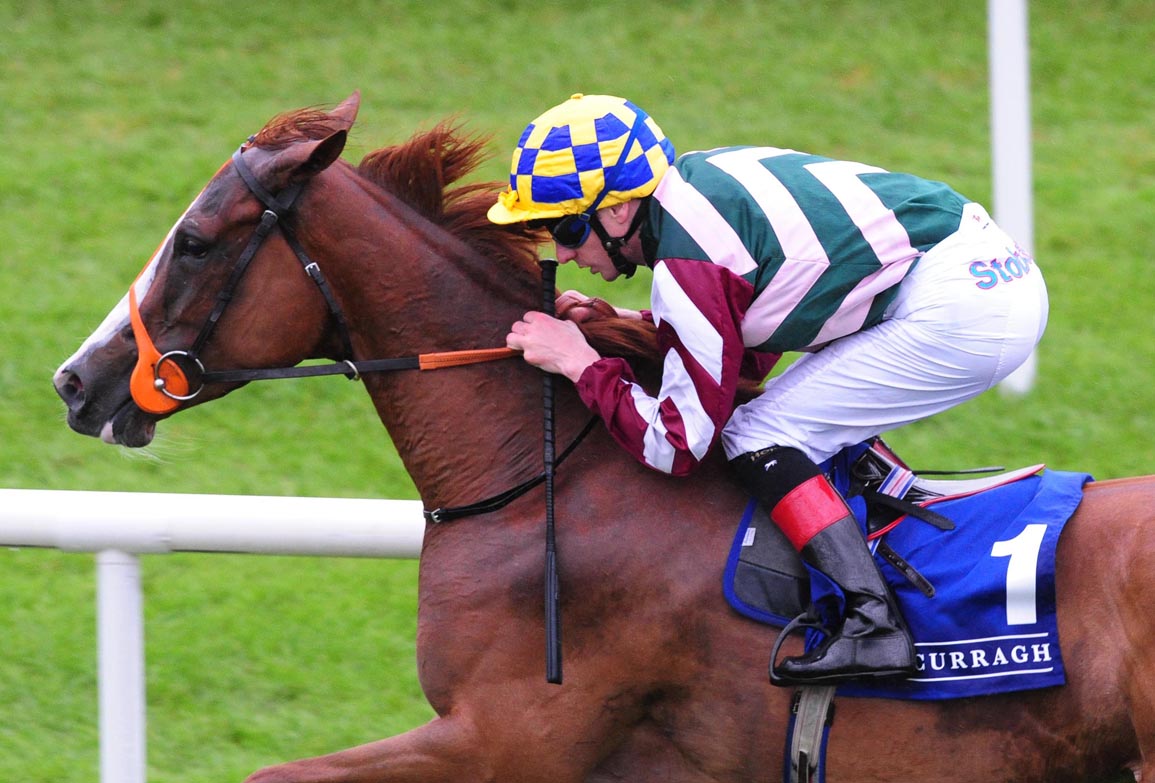 John Hayes went to the Goffs November Foal Sale of 2007 on a mission. Though he had grown up on a dairy farm with working horses and had himself dabbled in breeding horses for showing and eventing, this time it was a filly foal he was after, his first Thoroughbred and one he eventually hoped to breed from.

“I just need to reduce my numbers,” said Hayes, a consulting structural engineer who keep his horses on his 10-acre farm in Tipperary. “I'm 67, and it's only a hobby and I have a big business I'm still heavily involved in, so I want to keep it as a hobby. Three good mares is where I'd like to be.”

Recalling his visit to Kildare Paddocks 14 years ago, Hayes said, “I had wanted to buy a foal to [eventually] breed from; I wanted to have a broodmare. Sophie Germain was out of a Group 1 winner and I said, 'lovely, that's great.' I really didn't know anything about Indian Ridge–I was a complete greenhorn. She was a very late foal; she was a June foal so she was very small, but she looked nice. I met Joe Fogarty at the sales he said, 'John, you can't go wrong with her, she has Roberto on the dam's side.' He loved Roberto. So I brought her home.”

Hayes's purchase of Sophie Germain, unfortunately, was followed shortly thereafter by the economic downturn. Forced to lay off a large number of staff at his Hayes Higgins Partnership engineering consulting practice, Hayes opted to not send his filly into training.

“I was going to race her, but then the economy fell apart,” he explained. “We were letting staff go, and you can't be racing horses when you're letting staff go. That doesn't really sit well. So I decided not to race her, and I was happy enough not to because her pedigree was good enough. Indian Ridge was a phenomenal sire and she had a lovely page on the dam's side as well with Roberto.”

“When I had all my research done I decided, yes, Galileo has worked really well over Ahonoora-line mares,” Hayes said. “Ahonoora was Indian Ridge's sire, and New Approach was that same cross. I decided, 'wouldn't it be lovely if I could have Galileo, and who would be his best son that I could afford?' I couldn't afford New Approach so I ended up with Rip Van Winkle.”

Sophie Germain was covered by Rip Van Winkle when the triple Group 1 winner was standing his first season at Coolmore for €20,000. She produced a chestnut filly that Hayes took back to Goffs November. The judges, however, didn't share Hayes's enthusiasm for her.

Hayes admits he didn't plan to be a racehorse owner, but he chose trainer Andrew Slattery for the filly he named Creggs Pipes–after a traditional Irish trad reel-and pulled together some silks for the stable he named Delphi Six Syndicate, representing Delphi, the name of his home, and his six immediate family members: himself, his wife Una and their four children.

Creggs Pipes took some time to come into her own, eventually breaking her maiden in her seventh start at three, but it was when stepped up to a mile at four that she really began to excel, winning four on the bounce including the Listed Cairn Rouge S. and the Galway Mile H.

Creggs Pipes picked up a group placing in the G3 Fairy Bridge S. before the season was out and again at five when third in the G3 Blue Wind S., but she almost didn't run in the race in which she earned her pattern-race win, according to Hayes.

“Andrew had her entered in the G2 Lanwades [Stud S.],” he recalled. “Then the next thing she's in season so he wasn't going to run her. He was talking to somebody and they said, 'don't let that stop you, go race her.' And she ran away with the race. The conditions suited her perfectly. She likes soft ground. When she won in Galway that was soft ground; once she got away on soft ground you couldn't catch her. She'd bolt out of the stalls and be three, four lengths ahead, and on wet ground you wouldn't catch her.”

In the meantime, Sophie Germain produced Silver Spear, by Clodovil (Ire), that sire chosen by Hayes because he had provided the G1 Falmouth S. winner Nahoodh (Ire) out of an Indian Ridge mare. Hayes-who has been singing with the RTE Choir for 26 years and plays in a trad band-named the resulting filly after another trad reel, Silver Spear. Silver Spear was sent to Slattery and broke her maiden in her fourth start, after which she was third in The Curragh's Listed Legacy S. Silver Spear picked up that crucial black-type just days before her year-younger half-brother by Australia (GB) went through the ring at Tattersalls October. His value was duly boosted to 300,000gns when purchased by Philippa Mains, and that covered the cost of his dam's next mating.

“In the meantime I had sent Sophie to Frankel and I was wondering where I was going to get the money to pay for that,” Hayes said. “Thankfully, when we sold the Australia colt, that was our Frankel fee covered. I felt that if the worst came to the worst I was going to draw my retirement fund. But my wife wouldn't be terribly keen on that idea. But that worked out. She had a beautiful filly and from day one she was a dream.”

Sophie Germain's Frankel filly was one of the highlights of this year's Goffs Orby sale, selling for €650,000 to Al Shira'aa Farm. Creggs Pipes's second foal, a Sea The Stars (Ire) filly, sold for €180,000 to Sunderland Holding at the same sale. Sunderland Holding, owners of the sire, had purchased Creggs Pipes's first foal, also a filly by Sea The Stars, for 180,000gns at Tattersalls October the year prior. Creggs Pipes's 2021 colt by Lope De Vega unfortunately died, and she is offered at Goffs in foal to Mehmas (Ire).

Silver Spear, meanwhile, failed to find the winner's enclosure at three, and has been out of training since running once this spring.

“Silver Spear was entered in a couple big Group 1 races,” Hayes said. “She was entered in the 1000 Guineas but she wasn't ready for that. She really didn't shine at three. We tried her again this year but she had gone a bit sour. So I brought her home with the intention of having her home for a month, but then I spoke with Andy and said, 'we'll retire her. She has enough done and I'm happy enough with that.'”

Hayes admitted he would have liked to have kept Silver Spear and bred her to Mehmas, like her sister. But he has a few other prospects to look forward to, including Sophie Germain herself and her 2021 Invincible Spirit filly, who he plans to retain.

“I have a 3-year-old filly I bought because she was unsold at a sale and she was a half-sister to Alhebayeb. I bought her with the intention of breeding from her so hopefully she'll go in foal next year. She's by Dark Angel out of an Indian Ridge mare.”

In the fourteen years since Hayes plucked a young Sophie Germain from Goffs, he has put his study of pedigrees to very good use, and buyers at Goffs next weekend will have the opportunity to reap the rewards with Creggs Pipes and Silver Spear.

“I'm a big fan of Ellen Parker [creator of the Reine de Course series of influential mares], and what I've learned from her is linebreeding to the best females has proven to be a good option,” Hayes said. “I'm a bit fanatical about pedigrees. I'm always studying pedigrees. I go back six or seven generations looking at what's there, and I love that side of the business.”