Haskell Card at Monmouth Paused; Stakes to Be Held Starting at 6:00 P.M. 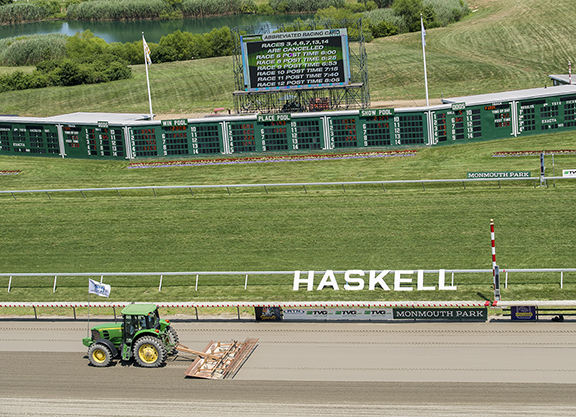 After the delayed completion of its first two races under extremely warm and humid conditions, Monmouth Park announced that it would cancel part of the remainder of its GI TVG.com Haskell Invitational card (races 3,4,6,7,13,14), but would hold its scheduled stakes races beginning at 6:00 p.m.

The following statement from Dennis Drazin, Chairman and CEO of Darby Development, operators of Monmouth Park, was issued after the announcement:

“We’ve been carefully monitoring the heat for days, including today, and we have a staff of veterinarians and state veterinarians, independent vets and consultants, all of whom tell us it’s safe to run, that we’re below the level required for the recommendation for cancellation.

“However, given the heightened concern from the public about the heat, and in the interest of the safety of the horses, we’ve decided to proceed with an abundance of caution, to cancel the remaining non-stakes races and to delay the six stakes races until a later post time starting at 6 p.m., with those races 25 minutes apart. The Haskell Invitational will now have a post time of 8:05 p.m.

“We’re doing this to err on the side of caution.”