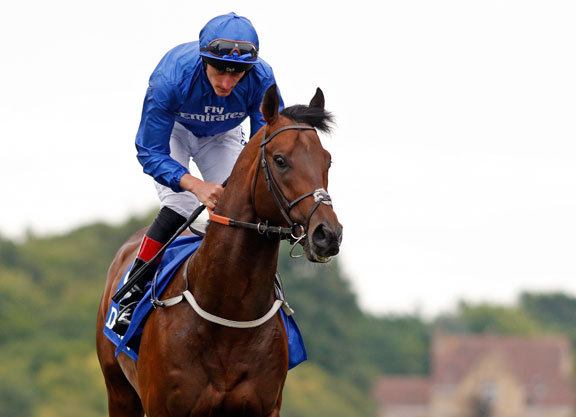 A world champion sprinter will add major doses of speed and precocity to the Darley stallion roster in 2019 with Harry Angel (Ire) to stand at Kelvinside. The son of European sprint sire Dark Angel (Ire) enjoyed a decorated racing career and earlier this year was the highest-rated short course performer to retire to stud in England for more than three decades.

Runner-up on debut as a 2-year-old, Harry Angel broke his maiden next time out in the G2 Mill Reef S, earning a rating four kilos superior to what his sire Dark Angel achieved in the same race.
In a stellar season as a 3-year-old, Harry Angel won the G1 July Cup and the G1 Haydock Sprint Cup, scoring by the widest margin in recent history, having earlier announced his presence among the top echelon of sprinters by claiming the G2 Sandy Lane S. at Haydock.

He ended the year rated 132 by Timeform, level with Muhaarar (GB) (Oasis Dream {GB}) and the best by any sprinter to retire to stud in Great Britain since 1985.

“He was the world's best sprinter in a year when there were a lot of good sprinters going around, particularly in Australia,” Darley Head Of Sales Alastair Pulford said. “The international handicappers rated him better than Chautauqua, better than Redzel, better than Vega Magic.

“He's a very, very exciting horse. The United Kingdom market has gone head over heels for him and his fertility is fantastic.”

His first appearance aside, he raced exclusively in group company and retired with five wins and four placings from 12 outings.

“Harry Angel is such an exciting horse. The thing I really liked about him was his manner of racing,” Pulford said. “He sat on the pace and was fierce, wanted to get on with the job and then go away from them. I like that in a horse.”

Harry Angel is the best son of Dark Angel, who won the G1 Middle Park S. and at stud he has produced nine stakes winners and seven individual Group 1 winners.

“Dark Angel is the English equivalent of I Am Invincible,” Pulford said. “He started from relatively modest beginnings and it's the outcross line we are looking for in this country.”

Harry Angel is out of Beatrix Potter (Ire), who is a daughter of fellow G1 July Cup winner Cadeaux Genereux (GB) and possesses an outcross pedigree with just one line of Danzig (USA) in the fifth generation, who is a half-sister to the dual G1 HKJC Champions' Mile winner Xtension (Ire) (Xaar {GB}).

“Harry Angel is a high-end sprinter whose precocity will work well in this part of the world,” Godolphin Australia's Managing Director Vin Cox said. “We have been to have a look at him and were very impressed with him on type. We're sure he's the sort that Australian buyers will like.

“We will be supporting him with Godolphin mares and expect him to get off to a good start.”