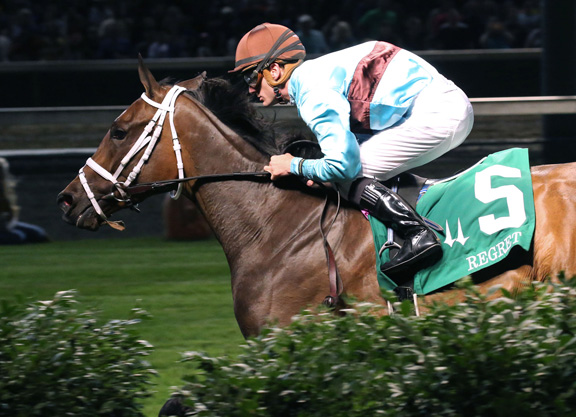 The lightly raced Hard Legacy (Hard Spun) handily disposed of a competitive field of 10 other fillies to register her (and her trainer's) first stakes win in the GIII Regret S., a race named for the 1915 Kentucky Derby winner, the first of three fillies to win the storied race under the Twin Spires. Breaking from the five hole, Hard Legacy had a smooth start and very briefly sat behind Winter Sunset before quickly overtaking that rival just after the first quarter. After reasonable fractions of :23.62 and :48.06 with her ears pricked, she was let loose on the turn with a gritty Winter Sunset glued to her flank.

Hard Legacy brushed off Winter Sunset in the stretch, never letting her closer than a half-length, bounding under the wire to reward trainer Norm Casse with the first stakes win of his career. Casse, a son of and former assistant to Mark Casse, sent out his first runner 16 months ago. He also saddled fourth-place finisher Belle Laura (Mucho Macho Man) in the Regret.

A maiden winner at first asking Oct. 20 at Keeneland by seven lengths, Hard Legacy has had an average of two months between each of her starts. A Dec. 23 optional claimer at Gulfstream was also one for the win column, but she was off the board in both the Feb. 3 GIII Sweetest Chant (fifth) and the Apr. 7 GII Appalachian (fourth).

Marylou Whitney homebred Hard Legacy is the 71st stakes winner for the Danzig stallion Hard Spun, who counts champion Questing (GB) and popular Grade I winners Wicked Strong, Hard Aces, and Hard Not to Like among his progeny. Kentucky Oaks runner-up Stone Legacy is the dam of the Regret winner and was also a homebred for Whitney, as was her dam Gulch Legacy. Hard Legacy's sire, 2004 GI Belmont winner Birdstone, was yet another homebred for Whitney (as were several generations of his female family) and now has four stakes winners to his credit as a broodmare sire. Stone Legacy's most recent foals are a 2-year-old colt by Mr Speaker, a yearling colt by Graydar, and a 2019 filly by Bird Song. This is the immediate family of GISW Catinca (Storm Cat), who sold at Fasig-Tipton's Kentucky Fall sale for $2.8 million in 1999.