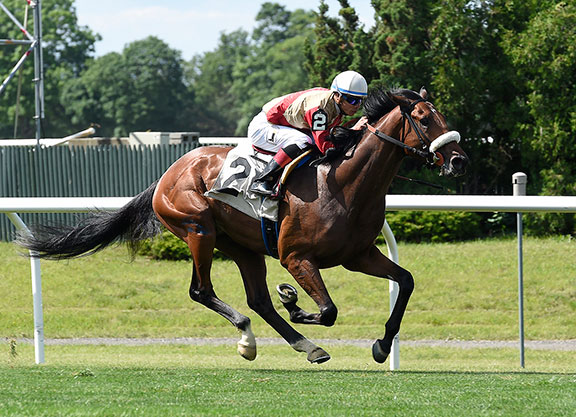 Trying 11 furlongs off a fast-finishing third going a mile and a quarter last time, Centennial Farm's Rocketry (Hard Spun&log=">Hard Spun) ran to his moniker and raced home to become Friday's second TDN Rising Star on the Belmont program. The scopey bay colt dropped better than 10 lengths out of it early on as they went a sharp pace for the trip and he remained in the latter third of the field for the better part of the opening mile. Still ridden cold midway on the second turn, Rocketry responded immediately when asked by Jose Ortiz and the duo swooped past rivals to lead with an eighth of a mile to run. From there it was a matter of how far, as Rocketry sprinted hard for a horse of his size and covered his final eighth of a mile in :10.89 to score by about four lengths. A $195,000 Keeneland November weanling, Rocketry was scooped up by the Centennial braintrust for $450,000 at the 2015 Keeneland September sale. That price was second-best among the 42 Hard Spun yearlings sold that year; Woodford Racing paid $500,000 for the Hard Spun colt out of Azorina, who, raced as Timeline, is also a TDN Rising Star and remained perfect in three starts with a 3 1/2-length defeat of GI Belmont S. hopeful Meantime (Shackleford) in the May 13 GIII Peter Pan S. Smart Farming is the dam of the 2-year-old filly Smart Stuff (To Honor and Serve) and a yearling colt by Tapit. She did not produce a foal this year.